I'm finally getting around to sharing two of my four (!?!) Olympic projects with you.  Our Internet connection at home has been wonky, so I uploaded photos before I left for work this morning, and am writing the post during my lunch hour at work.  So much for technology, huh?

Anyway, as I mentioned before, the Olympics really helped me get going on some knitting.  Between having a couple of hours on some days to sit and watch the events on TV, and sometimes more time on the weekends, and signing up for Kathy's dishcloth swap, I was knitting up a storm!

The funny thing is that I am 100% certain if I'd signed myself up for the Ravellenic Games, I wouldn't have finished anything.  As much as I love the idea of KAL, and have signed up for some in the past, it seems that the minute I do that, I no longer feel like knitting, or I suddenly have other commitments.  So though I was tempted this year, I didn't - and it really worked out.

I'll post about the dishcloths once I know my swap partner has opened the package (which was finally mailed yesterday).

Here are the more "major" projects I finished during the Olympics.  Something that still shocks the heck out of me, to be honest ...

First up: Four of my nieces really appreciate handknit items.  I decided to knit each of them and their husbands Christmas gifts (the same patterns, different colors).

Here is the first one. 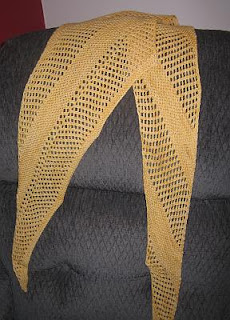 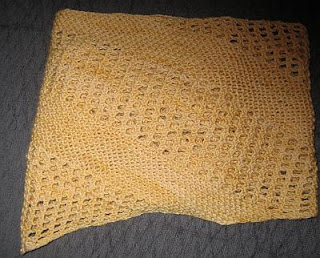 Item:  Annie's Gold Medal Portfolio Scarf
Pattern:  Portfolio Scarf, by Erika Flory
Yarn:  Loop Studio, colorway Easel (most of a single skein)
Needles:  Size 7US
Modifications:  None
Notes:  I made this pattern for myself in a different colorway a little more than a year ago, and not only received lots of compliments on it, but found it to be a great pattern.  There's enough going on to keep it interesting, but once you get the hang of it and the rhythm, it goes really really quickly.  I would usually knit a section at a time while watching the Olympics.  The yarn is lovely in color, feel, and drape.  This is a pattern that I think would be good for a beginning knitter who wanted to learn some new techniques (increase, decrease, basic lace pattern).

One down, three to go (I've already started the next one)!

Next up, for the nieces' husbands, who are all getting a Turn a Square Hat.  (I have just realized that I never blogged the first one I finished a bit ago - so I'll have to get going on that.)  This is the second one, for my niece Elizabeth's husband, Greg.  One of the best things about this is that it was made using stash yarn.  Since the pattern doesn't use large amounts of either color, you can get more than one hat out of a skein. 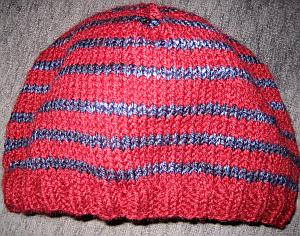 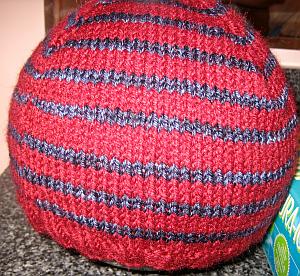 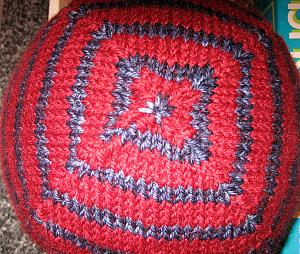 Item:  Greg's Turn a Square Hat
Pattern:  Turn a Square Hat, by Jared Flood (a freebie)
Yarns:  Berocco Vintage, Sour Cherry colorway; madelinetosh Tosh DK, colorway Ink
Needles:  Size 6US, Size 7US
Modifications:  None
Notes:  I really enjoy this pattern, and have knit many of these hats over the years.  They are always well-received and worn by the recipients.  This is a pretty quick knit, and another pattern that would be a good confidence-builder for a new knitter.

I do have to say that my photos make the colors much brighter than they are in real life.  The blue is more of a medium navy, and the red is closer to burgundy.

I'm so glad that my knitting mojo returned.  I really do love to knit, and if I end up with nice gifts to boot, it's win-win!
Posted by Bridget at 2:17 PM
Labels: 2016-knitting, family, fos, hats, knitted-gifts, Olympics, scarves

So nice! And now I feel badly because I've done absolutely NO Christmas knitting to date. Bah! The Portfolio Scarf is gorgeous and looks like it would be large enough to wrap around shoulders (rather than neck) in a chilly office. Love the color. I know I printed out the Turn a Square Hat after the last time you blogged about it...I may need to grab some yarn and make one of those for my son for Christmas.

Our internet has been whonky for months now! And whenever it goes down (or drops for a bit), it is always between two and three in the afternoon... figure that one out!

I started the Portfolio scarf last year - maybe the year before. And then stopped on it. Not sure why. I think it was the yarn, or my mood. But I do want to try it again as I love the finished project!

Congratulations on getting some Christmas presents done! They look great!

Awesome. Can you please send some of that mojo this way? Love the shawl, and you sold me on the pattern with your description. It's been a while since I've turned a square, but that is another pattern that I think continues to be a giver. Very nice. I like the contrast in your colors as well!

Great shawl and hat! I am still working on a KAL that I started 3 years ago so I know just what you mean about that commitment thing.

I love the squarish top on the hat! I'll have to give that one a try one of these days.

Lovely! I'm shawling right now--my Christmas knitting. I keep looking at it and wondering why it looks like I'm not getting anywhere. Sigh.

beautiful shawl!!! I like how a challenge gets things knitted but I dislike having a knitting time line even if it's self imposed...

Beautiful knitting! I love that hat pattern - it is such a good standby! And, the shawl is lovely - so delicate looking!

Your Portfolio is gorgeous! WOW. Love the color. I love a turn a square hat anyday! So geometric