WOW.  I don't know that even in my wildest hopes and imagination that I thought this project would end up the way it did.  To be honest, I thought it was a nice idea, but I knew that I was not the world's fastest knitter on my best day, and I knew that most of my knitterly friends had plenty of their own projects to work on, and own lives to live.  When I posted about Harry's Hundred to a Ravelry group, in their Knitting for Charity thread, I'd hoped to get a few people to donate one or two items in the name of the project, and hoped that might get us close to 100 items by the end of 2016.

Did I HOPE we could reach 100 items?  Yes, or I wouldn't have even decided to try.  But I was also trying to be realistic, and knew that there was a good possibility that it wouldn't end up the way I liked.  But I felt it was worth doing, and any items donated would be a plus.

Let's see how December worked out, and then do the final count, shall we?

The two items below were knitted by GringaTurista (Rav link) and donated as part of the project: 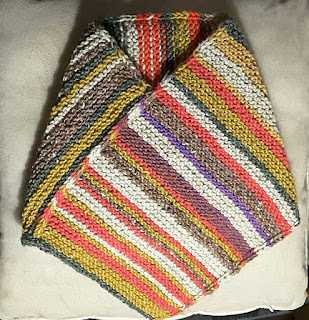 She calls this one the 70s Subdued  Cowl - I think the colors are great -
bright but also still something that even "manly" men would feel comfortable wearing.
Plus, nice and cozy! 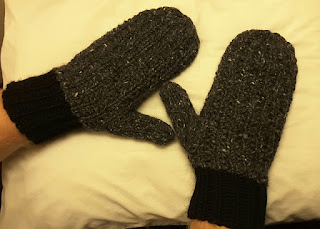 These are "Grey Guys : The Sequel, and being a fan of tweedy yarn,
I think they look quite elegant.

Next up, redindian (Rav link) knit and donated this blanket, which she calls the Green and Cream Blanket: 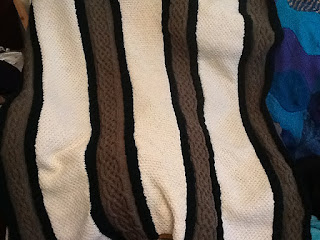 This is beautiful, right?  I love the combo of the cables and the seed stitch,
and the outline in black.  Imagine the joy that a person
receiving this felt!


Then there's her Staggered Cables Blanket, finished "in the last hours of 2016": 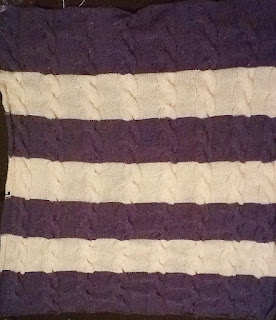 I am extremely fond of cables, so this one is really appealing to me.

And then, Kim wowed me even more than usual with her contributions!  Look at this lovely hat and scarf: 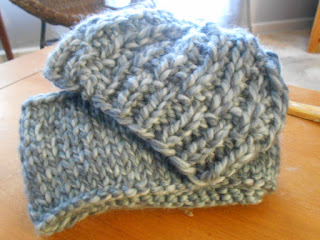 There's no way these aren't the softest things in the world, right?

But then she sent me this picture of her last group of items donated to a shelter: 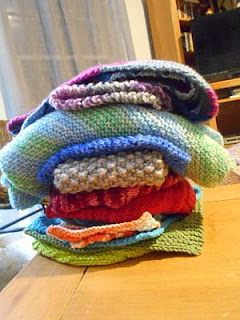 Before continuing, I have to tell you a funny story about the e-mail she sent with the photo above.  The subject line was "Bound for the Shelter."  Of course, being obsessed with animals, and knowing that Kim has pets, my first (panicked) thought was, "OMG, why is she taking one of her pets to a shelter????" and I almost didn't want to open the e-mail ... needless to say, all's well that ends well as far as that went!

What a way to end the project, with so many beautiful, cozy, and useful items knitted to be given to people who may get nothing else new for months or even a year again.

Thanks does not even begin to express how I feel, and how much I appreciate not just these items, but Every.Single.Piece. that was made and donated.  At a time when so many of us are feeling uncertain about our futures and the future of the world, I find it particularly comforting to know that the kindness of strangers is still going strong.  There is a well-known expression "Think globally, act locally" and as the year continued, I realized that the Harry's Hundred Project could fall into that category.

So thanks to everyone who contributed, who thought about contributing, or who just appreciated what I was hoping to do.

LOOK WHAT WE DID, PEOPLE!!

Final tally:
153 items
donated, in the U.S. and Europe

On behalf of my father's memory, I thank you. I'm so thrilled that his 100th birthday was able to be noted in such a meaningful way.  I'm sure he would be even more touched and honored than I am.

Posted by Bridget at 11:31 AM
Labels: Harry's-Hundred

Harry brought Two Good Things into this world. One, help for the needy. Two, you.

AWESOME!!!!! Proving once again knitter's and hookers are the best!

They are AMAZING projects. Harry would be so proud!

What a heart-warming post. Congratulations, on meeting and exceeding your goal.

So wonderful! Your post brought such a huge smile to my face. I just love this.

This is fantastic-so many people will be able to benefits from such generosity.

This is Good News in my weary world. Hooray For Harry and You!

Fabulous! Congrats on a great idea and then following through with help from others. Way to go!

How wonderful! What an awesome idea -- and such a great gesture. XO