The Last Gasp From the Last Year

Well here we are.  I did a good job yesterday of ignoring anything and everything related to the inauguration, though it felt weird since it has otherwise always been a day when I missed hardly anything.  I cannot think of a time when I consciously ignored every single thing about it.  I wondered if people back when Millard Fillmore was being inaugurated cared as much or as little.  (OK I know little about Millard Fillmore, but he is my go-to President when talking about ones that no one seemed to care about.  I mean, his name is MIL-LARD FILL-MORE!)

There's one part of 2016 that I wanted to share with you, and I'll do it now.  Here is a pictorial summary of the FOs for last year. 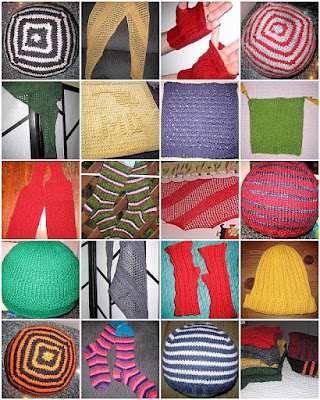 Nineteen items (with the last picture added for balance), which surprised me.  Pleasantly, but still surprising.  Does anyone else forget things they've knit in the course of a year, or is it just me?   Maybe since the few things in here that were for Harry's Hundred had already been donated, I forgot about them.  But in any case, that's pretty decent for me, since there were a couple of stretches where I didn't knit much at all.

On another note entirely I'm encouraged and pleased by the pictures and reports I'm seeing from the various marches.  Friends here in Philadelphia have posted lots of pictures, and it looks like an excellent turnout.  Most of my family is at the DC march, and that makes me so proud.  Here's a picture they posted on Facebook early this morning of part of the group - I call it my collection of nasty women and bad hombres. :-) 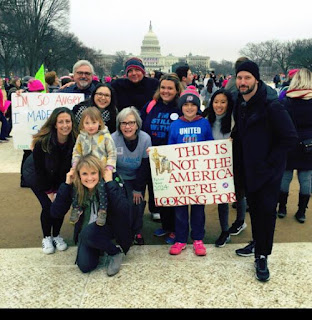 And a friend of mine who lives in Dublin, Ireland, said that they had a huge turnout there.  It makes my heart happy to see and know this.  I just hope we can keep the momentum going, since there's a chance it will be a long haul.

As for me today, I finished a book I was reading, put a pair of socks I finished knitting on blockers to photograph, and this morning The Tim took me out to breakfast so I'd have a chance to get out of the house.  I cannot tell you how nice it was this a.m. to be able not just to sleep later than usual, but to take me time getting up, showered, dressed, and ready for the day.  This past week was painfully exhausting, as I guess it will be for a while.

But the good news is that the cold/crud is starting to let go, albeit slowly, but I'll take it.  And of course, the cats are as pleased as ever that I'm still on crutches, because apparently there is nothing that has ever been more hilariously fun for them.  :-)

I hope your Saturday and the rest of your weekend is as enjoyable as possible.  We all deserve it!
Posted by Bridget at 2:17 PM
Labels: 2016-knitting, broken-bones, crutches, family, fos, women's-march

Well done by your family and friends Bridget. I completely stayed away from the news yesterday, but I did manage to see was not uplifting. I completely lost it crying the last two inaugurations, but this one was a dark, dark day.

Having you on crutches plays perfectly into their plan to kill us off one at a time.

Mine is going to smother me in my sleep.

Congrats on all the knitting finishes. 2016 was a great year for you.

I've been very selective on the news I watch or read the last month. My family thinks I daft and don't understand my point of view, and I've long given up trying to explain it to them.

I had TCM on all day Friday. I didn't look at a single news thing until I got home from the march in DC tonight. Yowza. I missed a lot. You can't take your eyes off the news for a second anymore can you.
I love all those hats in your collage. They really are eye candy!

Nice work on all those finishes and also for organizing the hat drive! There was a good march turn out here, too, and the weather even cooperated! Hope you heal quickly!

Oh...everything is done for Cat Entertainment And Feeding. You know that.

Impressive list of FOs! All the marches were just amazing and to see that they were taking place in other countries as well says it all, doesn't it?! And you are absolutely right that we are in for a long hall to keep up the momentum. Take care and heal that ankle....we need you! ;-)

Im very glad he got you outside!!!!! I loved looking over your years work!!! Heal well

watching the news coverage on Saturday made me so very happy! Loved it immensely.

Nice, impressive collection of finishes for 2016! Yay for your family and friends. And Yay for The Tim getting you out to breakfast. Hoping you are doing ok...weather today isn't very nice for getting to work on crutches....