Two things that are NOT the same, by the way.

What a week this has been.  Ugh.  I am often dismayed/disappointed in my country and/or its leaders, but currently, I'm embarrassed and ashamed.  And I don't want to feel that way about my country.  I know people that I think are pretty horrible, who are narrow-minded and prejudiced, and who are suspicious of every single person who is not "American" like they are.  And you know what?  Those people are examples of good character compared to those in charge these days!  A friend in Ireland sent me an e-mail, saying, "I thought there were checks and balances?  What are they, and why aren't they being used?"  I've got no good answer right now.  But I'm not about to sit back and let this happen.  Fascism is never good.  Ever.  I'm one person, but I'm not alone, thank God. 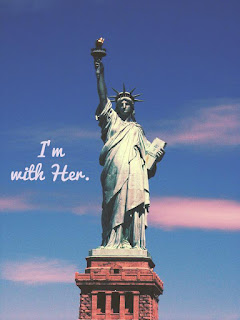 (used with permission of the creator)

In order to keep myself from making myself sick, I have been actively working to do and think of other things.  Like how much I love animals, and my own kit kats in particular.  When one of them is purring in my lap, the world seems much better.

Also - knitting keeps my mind occupied with something happy.  Between the world these days, and the fact that I am not as mobile as I usually am, I'm knitting up a storm (well, at least for me).  And I'm making pretty good progress on the projects I mentioned in my last post.

This is sock #1 of my Winter Berry Socks, and as you can see, I only have the foot left before this will be finished.  I love the yarn, and the resulting socks will be wonderful to wear around the house when it's really cold outside, but after this pair, I'm NEVER EVER using this pattern again!  It's written in a really annoying, folksy way that makes the simplest of instructions difficult to understand.  I know it's been around for a while, and lots of people love it, but not me.  I'll probably power through knitting these just to be done with it! 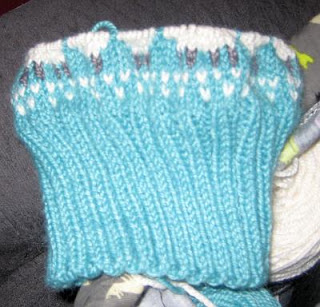 My only problem with this was that when I printed the pattern, it was hard to tell the difference in the shading of the squares for the colors, and it was so hard to even see because it printed out so small.  (I downloaded the pattern back when it was a freebie from Shetland Wool Week; maybe the paid-for version now available has better formatting.)  But The Tim enlarged the chart and fooled with some of it, so now I can see what I'm doing as well as figure out what's what.  The trickiest part so far for me was the rows where you used three colors, but I'm past that now, and back to two colors per row.  Phew!  I just hope it fits after all of this, but if not, I'll have a lovely gift for someone with a smaller head than mine ... ;-)

In other news, this was an "exciting" weekend for me!  I originally had an appt to get my hair cut the day after I got the cast on for my broken ankle, and I  had to cancel, not just because I was in bad shape, but because there are a bunch of steps to get to the salon.  So I optimistically rescheduled for yesterday.  The Tim dropped me off, and I made my way up the steps with my crutches to get my hair cut, then he gave me a ride home.  I feel so much better!  (You get good at steps quickly when you live in an old Philadelphia row home.)

Then about an hour ago, I made my way to the CVS around the corner and got some stuff I needed all on my own!  Granted, it took me about half an hour, and I made sure to come home and sit and have a cup of tea afterwards, but nonetheless it was a good feeling.

It truly is the little things, right?

Here's hoping we can all have a good week, even if only by finding the little things to enjoy.  Take care, everyone, and let's keep going.
Posted by Bridget at 12:06 PM
Labels: broken-bones, fascism, knitting, mobility, resistance, wips

Love the colors of your WIPs. I can well remember my time in crutches after knee surgery long ago. It's no fun trying to manage, but once you figure it out, the sense of freedom is exhilarating.

As to The Politics, I echo your sentiments completely. This is not who we are. This is not the America I know and love from history. And the fact that so many in Washington, D.C. are willing to desecrate our National Identity and Story for party politics and power plays literally makes me sick.

You are not alone Bridget, talking about this on our blogs make me realize that the far majority of people feel the same as we do. I wish you a speedy recovery with that ankle. Not the best time of year to have a cast on that is for sure. Stay strong my friend.

I'm ashamed along with you, and have been apologizing to friends and relatives in Denmark, Spain, and Sweden. Increased knitting output seems to be a positive byproduct of these awful times, and I love your socks. Congratulations on gaining mobility, and I hope you're healing well and soon getting around without crutches at all!

Knit, knit, knit, knit.....my needles are smoking from the stress knitting. I lived through Nixon and took to the streets often but this is something else.

My plan --- smile more, talk less - step up talking about the GOOD things in life and fight like Hell against the bad things.

I love that Baa-ble hat. So cute. They have one like it (I think a penguin or maybe it was a panda) that is still free.

I find it interesting that those who support "he who will not be named" are so defensive. I personally think many of them are embarrassed. I plan to call my Senators (2) and Congressman (1)) for Wyoming - all Repulicans. I refuse to be silent about my feelings.

I'm knitting and sewing a lot more than usual to distract myself.

I am trying to focus on knitting and the good in other people. I hope you foot is healing nicely and that soon you can move about as easily as before.

Dark times for sure. I am focusing on being nice, not accepting bad behavior from anyone.

Love your socks and your Babble hat is awesome colors! I made one the other year and it is small for me (operator error...not pattern), but I still cram it on my head and wear it occasionally.

I was with you on being so ashamed of this horrid nonsense. But then this weekend happened... and I am insanely proud at those who are stepping up to peacefully say this is wrong. From ACLU attorneys to our Senator who drove to the Philly airport to help those being detained. There is much more to be proud of - that is what America is - those people standing up!

I'm an avowed news junkie, but I can't listen to much at a time lately. The anger and the shame build in me too quickly. I know I should stay informed, but I can only take so much.

I agree. It feels like there are no checks and balances right now. I too am embarassed . I am usually such a proud AmericAN.

Im so PROUD of you for getting your haircut and getting to the store! You are making huge progess. Love the socks! Sorry about the pattern .

Oh, I am SO with you. I can't believe how dreadful things have become . . . in just a few days. I have, fortunately, had a big life-distraction this week -- as I move my dad out of his condo and into a lovely independent-living apartment very near me. Having that activity right now keeps me rooted in my own reality (although very much tuned in to what is going on around me).

I'm so happy to hear you're moving around independently! That's got to feel good. :-)