Hello all - I'm still here!  Two days after Christmas Day, I woke up with the start of the cold/crud thing that everyone seems to be getting, has, or has finally gotten over.  Weird, too, since usually I can feel things coming on in one way or another, but this was a complete surprise.  The worst part is that although I feel better than I did, I don't feel like I'm making great progress, even with the help of prescription meds.  Since everyone I know (including my dr) has said this hangs on for a longer time than expected, I'm hoping it will eventually leave and not turn in to anything worse.  But wow, do I feel awful!

In any event, I'm sure I'll survive, and I'm glad I'm not any sicker than I am.  So time to move on and talk about something else, right?

From what I have heard, everyone enjoyed the knits I gifted them for Christmas.  I even received photographic proof for two of them! 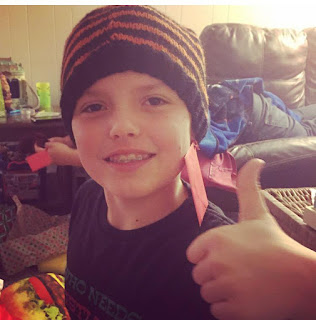 This is my great-nephew Zach in the hat I made for him with the colors of the Baltimore Orioles.  My niece Liz posted this picture on Facebook on Christmas Day, and said he wore it outside to play first thing after opening gifts.  (Personally, I hope he removed the gift tag, LOL!)

Then there is Patrick, my niece Amanda's husband (they are the ones with the family house in Rehoboth).  He posted this picture on Facebook, saying it was his favorite Christmas gift. 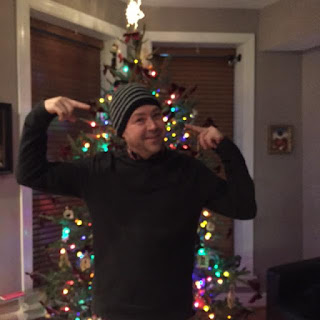 He also said his friends have given him lots of compliments and asked if I had a website where they could buy one.  I find that hysterical.

But it's always nice to see pictures of gifts you've made for someone.  I always figure that even if they wear it for the photo only, and then give it away, they went out of their way to acknowledge your efforts.

I've also been thinking about what I want to do in 2017 in various areas.  I'm deciding on my One Little Word.  I've decided that for the most part, I'm going to knit for myself, The Tim, or for our house this year.  For the knitting that I do, 99% I give away.  Which is fine, but I really want to make some things for ME!  In that spirit, I did start a pair of socks on January 2. 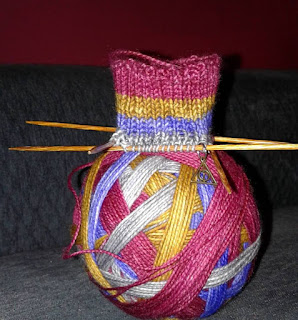 I'm at the heel flap now, so they are moving along very well.  There are several other knits rattling around in my brain that I want to try and make a list so I'll remember what they are, and try to make some of those.  And of course, I'll still make things for others and for donation, but I think I deserve some stuff for myself.  :-)

I am also thinking of some additional goals for myself this year, and want to narrow it down to those I am most interested in achieving.  I do better with goals than resolutions, because to me they do not seem as restrictive.  I realize it's as much psychology and semantics as anything else, but it works better so that's my story and I'm sticking to it.

That's about it for now.  I'm planning to share my 2016 knitting wrap up, reading wrap up, and Harry's Hundred wrap up with you soon, and who knows what other golden nuggets from my brain will come along?

I hope that 2017 is treating you well so far - it has been so far, so good for us.  There is plenty that I am not looking forward to (aka the ascendancy of The Orange One and his bros), but I'm going to try and not let that define things for me, at least not at the moment.

Sometimes, you have to hunker down into yourself to stay sane ...
Posted by Bridget at 11:11 AM
Labels: 2017-goals, Christmastime, family, hats, knitted-gifts, sick, socks

There's no sin in knitting for yourself! We all deserve to enjoy the fruits of our labors.

Love the hats on the giftees! They look well pleased.

I still have a bit of a cough from that crud I came down with the day after Thanksgiving. Hope you have better luck combating it than I did. You were very generous with all your knitted gifts so you shouldn't feel at all guilty about knitting for yourself this year. Looks like you have a good start on that with your socks. Looking forward to seeing how thet turn out.

Being in the DC area I am feeling terribly crowded by all the hype here regarding the Orange One's ascendancy. I was also just thinking that I need to hunker down into myself until it's all over. I see a lot of stress knitting in the next few weeks.

Nothing wrong with a little selfish knitting! I say you deserve it!

Wow, the sock yarn is gorgeous!

I, too, like receiving photos of my knits being used: it makes me feel good.

Hoping that you are making progress in the health department and can stay healthy now that you've paid your dues with the crud. I LOVE the hat photos from your gift recipients! They make me happy as a knitter, just like your socks!

Love your socks...fun colors. Nothing wrong with knitting for you - enjoy! Your gift hats look fabulous. Hope you feel better soon.

Good for you to knit for yourself! I find that everything I make, I give away. Hope you feel better soon. Pat xx

happy new year and I love the socks on the needles, what pretty pretty yarn. I wish I would have remembered to photoed the hats I made on their heads...oh well. I was too caught up in the holiday spirit!

I hope you're feeling better! I love your words . . . hunkering down inside yourself. Yes. That may be the only way to manage for awhile. Sending healing juju your way. XO

I love those socks! What fantastic colors! Just what January needs!! And, yes - sometimes you do have to hunker down to stay sane... AMEN!

I love the photos of your family in those great hats. I used to knit for everyone else, then I realized that I need to knit for myslef too. It is fun to try and pick out the perfect project for myself, and treat me like I treat others. As far as the Orange Man, you know my feelings. I hope you feel better Bridget.

Love, love the sock yarn and can't wait to see how they turn out. That crud has hit the West Coast also; DH and I have been battling it for the past week. Yuck. On the positive side, it looks like your hats were popular! Time to turn the needles your way. Feel better and Happy Knitting. (And I agree with your OM thoughts!)

Happy New Year Bridget! I love it when people actually wear or like what I knit them. My expectations are pretty low. The photographic evidence of your knits in action are fantastic! Really nice hats and good gift ideas!

I am like you and rattling around a bunch of knitting ideas. I was really focused 2 days ago on my plans but now ... not so much, ha!

So glad your hats were hits. I knitted three shawls for Christmas gifts, and they were hits as well. My friend actually teared up when she received hers, she was so touched. And my sisters were very happy and pleased.

I wish your Creeping Crud would resolve itself! It's making the rounds here in NEO, too. Nasty stuff. Feel better soon. Taking Care Of Me--sounds like a good goal for a lot of us for the next four years. After all, it's being role-modeled by the new administration....

Love the self-stripping yarn, and there is NOTHING wrong with knitting for yourself. Feel better soon.