An FO and Trying to Be OK

Today I have one of two recent FOs to show you (I know - TWO!  It's like I've become this person who actually finishes knitting projects, go figure!).  This is my third pair of socks for 2017, so I'm right on schedule to have 12 pairs finished by the end of the year.  As I think I mentioned before though, if I had "officially" signed up to do this in the Ravelry group, I'd probably be in the middle of the first pair of the year ... 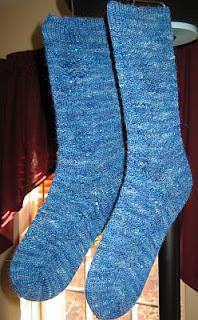 Project:  Texture Blue Socks
Pattern:  Hermione's Everyday Socks (a free pattern on Ravelry)
Yarn:  Black Bunny Fibers Canadian Luxury Sock, in the Unity colorway
Needles:  Size 1US
Modifications:  None
Notes:  I know this is a popular pattern on Ravelry, and I've seen so many pairs that friends have made that are amazing.  But for whatever reason, I didn't enjoy knitting this pattern.  It's not difficult, and once you get started, it's easy enough to memorize, but it just didn't "click" for me.  Then there is the yarn - I've had this yarn in my stash since 2007, when Carol (Ms. Black Bunny herself) dyed this colorway to sell, using the proceeds to support the initial run of Barack Obama for President.  It's a lovely shade of blue, a little heavier than the usual sock/fingering yarn, and they will be warm, since they are 50% alpaca, 30% mohair, 10% silk, and 10% merino.  It's really lovely and soft.

I wonder though if it was the combo of pattern and yarn that didn't thrill me.  Though I love the color, I think I've knit so many variegated/striped socks recently, that a solid color seemed less than exciting; I don't know.  I may try the pattern again down the road with another yarn, and see if I enjoy it more.  Overall, I'm happy with these - they just didn't get me as thrilled as I was expecting to be.

Here's a better photo that shows the texture of the finished knit: 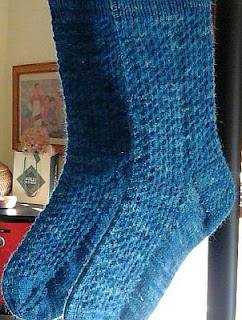 In any event, they are now tucked away with my others in my 2017 Box o' Socks.

Other than that, I'm having one of those days when I am feeling like any second I'll burst into tears, even though I have no idea why.  Granted, some things I've done today have not worked out, but none were big things that should put me over the edge.  And I've been making an extra special effort to do things I enjoy, but they don't seem to make much of a difference.  I hate when this happens, and I know it will pass - maybe even by this evening, who knows.

On the plus side, I have a barley-feta casserole cooking in the crockpot, so The Tim will get a break from fixing dinners, like he has been doing while my ankle has been non-functioning.   And I just a little while ago took some Irish Soda Bread out of the oven to cool.  (I was all set to make it yesterday, but was missing an essential ingredient that the market around the corner didn't  have, and the other places that would have it were not nearby.  So I had to wait to get it today.)  Never fear though, we marked the day yesterday with Guinness and Irish cheese. :-)

So truly all is well, and I'm hoping to feel more together soon.  I can deal much more easily with a bad day when I've been having a hard time than when it just shows up, like today.  And the kitties are all fine, sitting here with me and occasionally sitting *right* in front of the TV so they can follow the ball in the NCAA games - they have sudden bursts of fandom, apparently ... ;-)

Anyway, that's all for now.  Hope all of you are having a good and cozy day.  I'll be back with FO #2 sooner rather than later, so stay tuned!
Posted by Bridget at 4:26 PM
Labels: 2017-box-o-socks, 2017-knitting, baking, black-bunny-fibers, cooking, depression, fos, socks

Woo hoo for finished socks!
I hear you about the blues. My St Patty's Day was a miserable affair on so many levels that I didn't even blog about it today. Was it the weather? The cake that fell apart and ended up being triffle? The stress level with Daddio/Medicaid worries? The news in general? I dunno but I needed that green beer like crazy last night. Today I've got a headache. I've always hated March.

I think Hermione's looks better in really light (speckled) colors. It shows the pattern off a bit more.

Maybe the blue sock made your blue funk! Hope your kitties do something silly and have you feeling happy again real soon.

I knit Hermione's Socks a couple years back and didn't love making them either.

I'm sorry you had a down day & hope tomorrow is much better.

High Five! Love the color and name of the yarn's colorway.

I've had some strange days lately as well: on the verge of tears multiple times one day and okay the next. Some nights, I can get to sleep for over an hour; others, as soon as my head hits the pillow. It's concerning.

The news lately is enough to send anyone into a state of depression. I've been trying not to watch it to closely. He's really making a mess of everything. Broken bones can make a person want to burst into tears too. Now that I have sufficiently diagnosed the cause of your bad day....I hope it gets better soon. ;-)

Chiming in to commiserate. Been feeling Blue myself lately. Can't get it Together for anything. I made brownies three days ago, and they lay untouched in the pan still. We're both a bit Down In The Dumps. Take care of yourself. We know things will get sunshiny outdoors, at least.

It's been that kind of week. Maybe you need to have a good cry and get it out of your system. There isn't always a reason.

Then go hug a kitty.

Hi Bridget, pretty socks. Love the yarn. Funny, I have knit that pattern and it didn't do anything for me either. Hope you are feeling better today. Everything going on in the world is enough to make us all sad and crazy. Add to that winter in March when we are all looking forward to Spring (even though we know winter can come in March and even though some of us -- YOU -- really like winter...still...). Hopefully the sun shining today will make a difference.

Hope today is a better one for you! Nice socks; I'm with you on the pattern it doesn't send me either.

Hugs to you Bridget. It happens to me too. let the tears come.. get them out....don't try to figure out why. Just release.....
I love your socks and I admire your finish! Sticking with a pattern you don't like is not something I do often. I love the Obama theme

beautiful socks and I do so hope that today is a really good day filled with the non tear filling type of a good time :)

I feel my own unfinished pile giving me a LOOK.
Amalia
xo

Ah my friend I think it is just the tremendous stress we are experiencing everyday. It seems like the news can't get worse, yet it does. Bad news everyday is the new norm and I think it just tuckers us out. I don't get teary I get angry. By the way love the socks. I am giving you a hug from afar.