Random Things on a Rainy Friday

Well, Spring is not sprung-ing today in Philadelphia, that's for sure.  Right now, it's about 38 degrees and POURING!  Gah.  It's that kind of damp that makes you cold even once you are inside.

Anyway, this is your occasional post of random things from my brain.  Feel free to look away.

You may have read about our Vice-President saying at one point that he never eats alone with a woman other than his wife.  Which I find terribly weird, but I also think it's creepy that he calls his wife "Mother."  In any event, this picture of Mike Pence and the expression on his face, along with the headline from the Onion made me laugh out loud.  He does look rather concerned ...

I'm doing something new (to me) with the pair of socks I'm knitting - I'm going to attempt an Afterthought Heel.  I don't know how well it will turn out, nor do I know if I'll want to do it after this pair of socks - it feels like it's making the knitting of even just one a long slog, since there's no "progression."  I think I like the feeling of cuff, leg, heel flap, heel, gusset, foot, toe - they are all progress markers for me, and it starts to look like a sock.  But who knows, I may feel differently once I actually install the heels on the socks.

Have you watched "The Detour"?  They are on season two, and it is the most ridiculous show (gross sometimes, too), and we laugh ourselves silly watching it.

Apologies to the blogger who mentioned this, since I cannot remember where I read it, but they recommended the Harry Potter and the Sacred Text podcast.  I've listened to the first two chapters' episodes and the teaser, and so far am really enjoying it.  It's not preachy, it just looks at the books from a whole different perspective.

Since it was raining so hard, I put on my rain boots to go to work.  It was the first time I've worn something other than the cast or my walking shoes on my right foot since January 11th, when I broke my ankle.  It was extremely uncomfortable, to say the least.  At least once I make my way home today, I won't have to go out again.

OK, this falls into the category of Blowing My Own Horn, but ... last Sunday, I went out to take a little walk around the block, and I saw a couple walking their little doggie.  I asked if I could pet the dog, and they said that it was the last walk for her, and they were on their way to the vet for the last time.  The young woman was sobbing, so I gave her a hug, because I know only too well how she was feeling.  Then  on Monday, I got a notification of a post on the Nextdoor site for our neighborhood, and when I opened it, this is what I saw:

"To the stranger who saw me crying in the street this morning as I walked my dog one last time before I had to let her go- who hugged me and told me everything was going to be okay- thank you."

My Monday was a little better because of it. :-)

I saw this picture on Facebook this week, and ... well, let's just say that I think we can all guess how this would go over ... 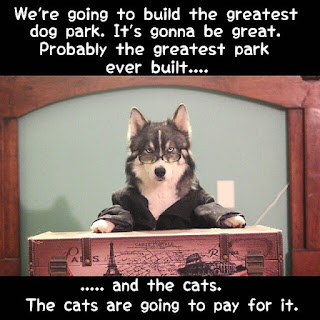 OK, that's it for now.  I'm glad the weekend is just a matter of hours now.  I'll probably watch the Final Four games of March Madness, and do the usual weekend things, but so far I have no specific plans.  Which is fine, since some busy weekends are coming up.  I hope yours is a good one!

I saw this the other day.  I think it's worth keeping in mind, for the weekend and every day.  :-) 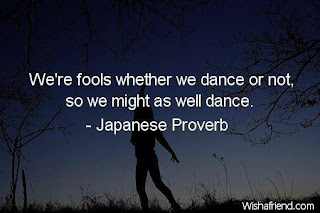 you were her angel in her time of need. I'm sad that her pet is aged or ill but how nice you bumped into her and gave her comfort. The podcast sounds interesting so I'll check it out one day soon. I've got a back log to make up for!

Wow! That is so sweet that they lady put something on NextDoor. I guess we never really know how much our small gestures may mean to someone.

That is just so sweet Bridget - so glad the woman left a notice. And, yes, Dug was nudging you to do that.

I had not heard about Pence calling his wife Mother or that he won't dine alone with a female other than his wife. Weird doesn't even begin to describe it...

I saw the dog park cartoon and intended to post and then promptly forgot...thanks for posting - it is so funny.

The Japanese proverb is great!

After wearing rain boots (and surviving a rainy Philly day), you need to put your feet up when you get home and have a nice, stiff drink! Enjoy the weekend.

Being kind and compassionate is always a good thing. I'm glad you were there at the right time for your neighbor.

Raining buckets here today too. I have some soup in the crock pot and will settle in for some sewing and/or knitting.

I hope your workday goes by quickly and your weekend is a relaxing one.

It's cold and rainy here too - I feel your pain.

That was very sweet of you to give her some comfort. And sweet of her to give you some recognition! Sometimes those little connections can make all the difference!

My heart goes out to that couple walking their dear pet for the final time. It's such a terrible and momentous decision to make. I have had to do it twice myself (as have so many pet companions), and it is so painful. Even in her grief, she chose to acknowledge your Kindness; that speaks Volumes, I think.

It is grey and relentless here in NEO, too. Looking for Bright Spots wherever I can find them.

It's wonderful of you to comfort someone who so obviously needed comforting and to know that she appreciated it is even better. It's cold, rainy, and quite yucky here, so I also thank you for the Mike Pence and dog park laughs. I wonder if Pence is afraid that he won't be able to control himself or he's presuming that he'll have to beat women off with a stick? I bet I could resist! ;-)

Oh....you broke my heart. What a sweet, sad tale of woe.
And yes, Pence is a weirdo. God help us if he survives the impeachment. Even his home state can't stand him.

Bridget- That was very kind of you to comfort that lady. I probably would have cried right along with her.

First of all Mike Pence is a putz, I mean really can't women be trusted to not desire him or to be actual human beings that won't be suggestive or put him in a bad position? I feel sorry for his, "Mother" and daughters.

You are the kindest person Bridget. I am so glad you hugged that sobbing woman. BLess her, her heart is broken.