Earlier in the week, I mentioned waiting for Saturday to take some good photos of a finished project, since it was supposed to be a sunny, bright day.  It was a bright sunny day.  And I did remember that I'd wanted to take a picture ... at about 8:00 p.m.

So rather than wait any longer, you're getting the photo I took on the bed in the guest bedroom earlier today - since the bedspread is white, I knew it would at least show up well!

At long last, the Park Slope Blackbird is finished, blocked, repaired, and ready to be worn! 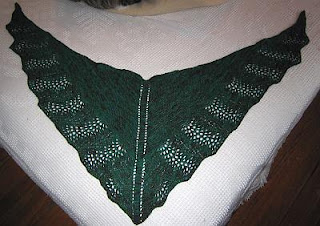 Hopefully, some day I will be able to get a better picture, so you can see the colors that run through the yarn - green, lighter green, black, and then every once in a while, a speck of turquoise. 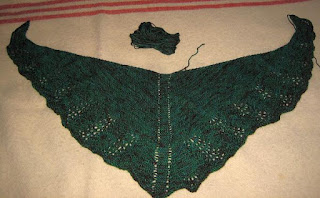 When I finished knitting it, I laid it out to see how it looked - nor perfect, but not bad.  And the little bit of yarn above is what I had left in in the skein. 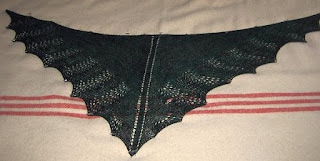 Then when I blocked it, I noticed a large hole, where a stitch had dropped - ugh!  (In the photo, it's in the right side, in the border.)  I decided that once it was dry and blocked, I'd see what I could do.  I couldn't quite figure out what to do, so I improvised and just mended it.  I feel it's not really noticeable in the end, and as long as I don't care, I'm happy with it.

Project:  Park Slope Blackbird (so named because I started it when we were visiting my niece, her husband, and their little girl, who live in the Park Slope neighborhood in Brooklyn ... of course they do, right?) (Rav link)
Pattern:  Multnomah, by Kate Ray (a free pattern)
Needles:  Size US3
Yarn:  Fiber Optic Yarns Foot Notes, in the Blackbird Batik colorway
Modifications:  None
Notes:  Well, you have heard the saga of how this was WIP for years, because I'd messed up the border.  Once I decided I was determined to finish it, I still couldn't get the border to work.  After several attempts to figure things out, I finally went to the designer's website and read through the pattern line by line for the border, and figured it out - it was punctuation that was the problem!  I'd printed the pattern a while back, and a change had been made, but not noted as errata.  So the copy I had read for the beginning of the 3rd row:  K2T three times, yo, k1 six times, etc.  What it *now* says is:  K2T three times, (yo, k1) six times, etc.  Well, that makes a HUGE difference!  I sent a note to the designer, and she said since it was a matter of punctuation, she didn't mark it as errata.  So if you had this pattern from a while back, print out the one currently on Ravelry, or you'll be as confused/frustrated as I was!

Having said all of that, I just love this shawl, and can even see making this pattern again down the road.  Now that it's straight to me, it's really an easy, pretty knit, especially if you don't usually knit lace.

Of course, my assistant felt the need to "style" the photoshoot ... 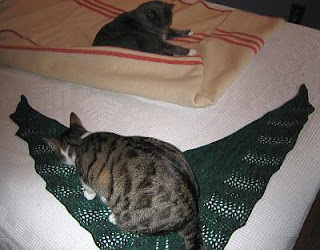 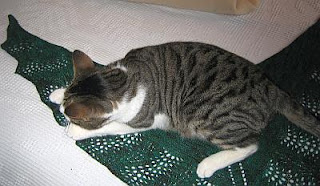 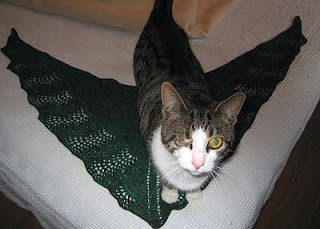 Sigh.  It took about 20 minutes until Jack decided to just hang with Jetsam, instead of "helping" me. 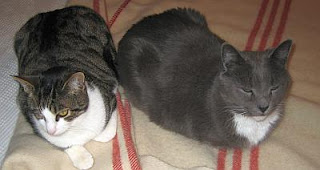 Right now, I'm working on the first sleeve of the previously mentioned Custom Fit sweater, and I've started another pair of socks. 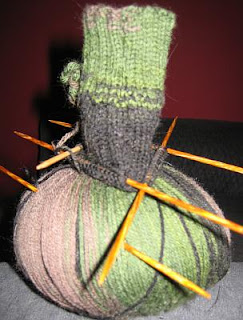 The yarn is Ty Dy, which I've never heard of or tried before.  The color changes seem kinda weird so far.  And the part that looks tan in this photo is actually more of a medium brown.  I have no idea what these might even start to look like as I keep knitting - I'll keep you posted!

That is a beautiful shawl, and I love your stylists! I'm not an editor or an English major, but punctuation (especially parentheses that make a BIG difference) should have been marked as errata. Congratulations on persevering and your lovely shawl!

Your shawl is lovely; I love the lace border. Sorry to hear you had problems with the pattern. That has happened to me before too. Your assistants are adorable! My best to you, Pat

Your shawl is stunning with and without your assistant.

I saved that pattern years ago, so I'd better trash it and download a new one. The revised directions make a huge difference in how it is knit.

I've seen Ty Dy yarn but have never knit with it.

The shawl is magnificent my friend. Just mend that little spot and move on, no one will notice a thing. I Just did the same thing with the shawl I just finished.

Beautiful shawl! I just love the color. :-)
My dogs don't usually get in the way of my finished knitting photos . . . but they often get right in the way when I'm trying to photograph something in my garden! Helpful pets! Gotta love 'em! XO

Jetsam really would prefer that Jack NOT be touching him, obviously!!! LOL

I had an assistant tonight while doing some photocopying. A 2 minute job took about 15 since I had to remove the cat head from the process with every sheet.
(He already BROKE the copier. You now have to feed in each sheet of paper by hand. Thanks, GIROUX! Or maybe it was Obama ....no way to tell.)

Bridget, your shawl is beautiful. Congratulations on a great finish. Like others, I have a copy of the old version...need to update. Love seeing your assistants!

What is it about kitties that make them want to sit on everything? I can be all alone on the deck, laying out a precious FO and some cat will always show up out of nowhere to put their kitty butt on it.
The shawl is gorgeous. Well done YOU for sticking to it!

that shawl looks perfect to me :) I've knit that pattern and I love how adjustable it is :) Gorgeous shawl!!

Hurrah for your Finish! A bit of weaving and no one will be the Wiser as to your mistake.

Say no more about Cat Assistance--I have it Overmuch here, and in every aspect. Certainly it is Required for All Things Of Importance, and Necessary Especially When Such Things Are Black.

The shawl is gorgeous! Good idea to just mend the spot. I think I'm going to have to be doing just that on the shawl I'm working on at the momnet. The border is giving me fits.

I knew you could do it!
And as a designer, I generally consider punctuation as errata.. it can totally change the meaning! Of course, I'm a writer too, so...

Congratulations on being done! It looks great!

The shawl is beautiful. I love when a colorway has all those colors in it. It adds dimension and texture. I'm dying that your cat just plopped itself RIGHT ON TOP of the knitting. No fooling around! Right on it! I'm curious to see the ty dye knit up, the fact you don't know what it's going to do sounds pretty fun to me! Yay for socks!