An FO and Ruined Christmas Averted!

As I'm sure you could tell from reading my blog over the past month or so, or if you had talked to me in person, awfulness and stress at my work increased a hundredfold during the month of December.  To the point where, if I dropped my comb in the morning while getting ready, I'd have a ten-minute crying jag and just want to get back into bed.

The only thing that saved me was that it was Christmastime, which you may also have noticed, is a time I really do love.

Anyway, by the time I got into December, the only 2017 projects that I had waiting to be finished were the fingerless mitts I was making for The Tim, my Holly Berry Socks, and my For the Birds sweater top.  I was really hoping I'd get them all completed, but I *definitely* wanted to finish the mitts, since they were a gift.  With everything else going on and other preparations, I didn't get to them as soon as I'd thought I would.  But since I only had the thumb on the second one to do, and then weave in the ends, I wasn't really too worried.

Well, I did successfully finish them, gift them, and they have been admired and already worn a lot.  All's well that ends well, right?

It was *getting* to that ending that is the story ... 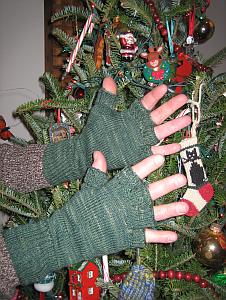 Notes:  Well, as you can see, they fit The Tim's hands and look just fine.  (You will also notice he is incapable of having a photo of a knitting project that he is wearing just be a normal photo.  No, that won't do.)  I will say from the get-go that the pattern is worth purchasing, and is really, really well-written and understandable, making it an enjoyable project.  And the yarn is truly wonderful - soft, strong, not splitty at all, and just lovely to use.

So ... back to getting these finished.  Saturday, December 23, I woke up at my usual time, which is hours earlier than The Tim gets up.  The last day of work had been the day before, and I was feeling so great, and so happy, and so relaxed, that I decided I would knit that last thumb right then.  That would give me time to weave in the ends, give the mitts a mist to block them, and then later that day or the next, I could wrap them up.

The second one was SO SMALL and SO TIGHT that it wouldn't have even fit one of the cats!  I kept setting it on top of the other one, and putting my hand over it, like somehow that would make it grow.  I really couldn't register what was happening.  At least not right away.

Apparently, I was so distracted, anxious, and depressed when I had been knitting the second one, I had made a fingerless mitt for a gnome, or leprechaun, or any other tiny character you can imagine - and I didn't even notice it!

Now - even two days before then, this would have caused me to spiral downwards quickly, lose my s**t altogether, and it would have ruined ALL of Christmas for me.  But given when it happened and my state of mind, I just laughed really hard until I cried.  And I couldn't wait to tell The Tim the story. 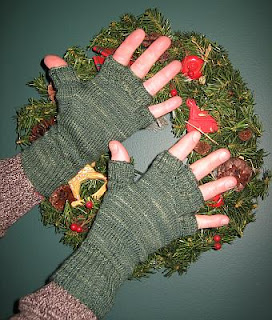 I wrapped up the one mitt, put the other one out of my sight, and just forged ahead.  When he opened it on Christmas Day, he said, "Oh wow, this is great!  I'll admit I'd hoped for a pair, though."  We had a good laugh over it, and later that afternoon I cast on the second one again.  In two more days, it was completed, correctly sized, and without any drama.

So far I haven't been able to find the mini one I put out of my sight.  I know I didn't toss it, because I wanted to show it to him eventually, but right now I have no idea in the world where it is.

And that, my friends, is the story of this FO, and how it happened at a time when it became a funny story, rather than a tragedy that ruined Christmas ... :-)  A true example of how timing makes all the difference.

Have a good last weekend of Christmastime!
Posted by Bridget at 5:45 AM
Labels: 2017-knitting, Christmas-Day, Christmastime, fingerless-mitts, fos, knitted-gifts, The-Tim

My last few years of work were so stressful that I cringe now when I see some the finished projects that were made under that stress. I used to get up early and knit before work because I knew I would be too wiped out in the evenings. I just threw away an unworn pair of socks because it represented a very bad time and I knew I would never wear them or gift them due to their bad mojo. Weird I know, but my brain makes a strong connections to weird stuff like that when I am stressed. The year my mother died I would not let myself even pick up the needles at all for that very reason.
I hope things look up for you in the new year.

Oh, Bridget! I'm so glad you found that size discrepancy after work had ended for the holidays, rather than while you were still working! And I'm glad you and The Tim could take it with grace and humor. It is a funny story!

When you find the small mitt, toss it in the box of Christmas decorations as a reminder that Christmas miracles do happen. I hope 2018 is a MUCH better year.

Your guardian angel made sure you had enough yarn for the second 'real' mitt!

Those are great mitts, shown especially well with Tim's jazz hands in front of the tree! If you find the tossed-aside mini, would it fit you and if so, do you have enough yarn to knit another mini?

That is a great story! Well, for someone else - not me - LOL. I do love The Tim's comment when he opened the single mitt - priceless. Glad you had sufficient yarn to do a second mitt in the correct size.

Along with everyone else, wishing you a brighter 2018!!

Isn't it amazing how our mood affects our gauge? I once knit my mom a blanket that ended up looking like a Hitchhiker scarf. I was working a job I HATED.I can not express how much I hated that job. I cried in the car on the way home every single day. I'd get home, pour a glass of wine, wipe away the tears and start knitting on the blanket. The end result was that you could visibly see where I'd started each day because my gauge would start off so tight and end up so loose by the end of the evening. The edges of the blanket literally had that Hitchhiker scarf zigzag thing going on. I called it a design element and gave it to Mom anyway. :)

Tim's xmas tree jazz hands are awesome. Your gloves are good, but I'm still intimidated by all the little finger holes! You're my hero!I'm glad it all worked out Bridget! I had a similar feeling of having to go to a party empty-handed, but the mitts made it finished and made their recipients happy so yeah here's one for Christmas spirit getting us through. ps: I wish you good spirits through 2018. I'm cheering you on, esp when it's crap at work. you've got a lot of good going on outside of that joint. don't give them that good part of you too -- save that for the homestead and crafts.

So glad your mitt story had a happy ending! Happy New Year! May 2018 be without stress!

Oh my goodness! What a story. Of course you'll tell us where you find the castoff mitt (someday).

I hope your job is less stressful now!! I can imagine the look on his face when he opened one glove!

Bridget, I am so sorry about the stress, I know how you feel as I ended my work year very stressfully with two of the little ones I work with getting declined in the amount of services. I felt so horribly responsible although I spent a great deal of time on written reports trying to get them the services they needed. Plus I did not get a break from work like so many do at this time of year. Anyway I am feeling tired already and the New Year has just started. I loved the mitt story, The Tim has such a wonderful sense of humor. He is a keeper. Okay my friend, we will carry on won't we?

I am sorry about the stress, I hope it resolves soon for you! those mitts look mighty fine :)