Well, the good news is that with all of the local knitting experts that I am lucky enough to know, I have had more than one person offer to help fix my problem with the sleeves on my Edie top!  (There really is an embarrassment of riches in this area with "knitterati" so to speak.)  So I have full confidence that the problem will be resolved and I can finish it soon.

Meaning, I'm ready to move on with projects.  I still have not wound the yarn for my brother-in-law's socks, but I did start on one of two projects I'm knitting for some friends' grandchildren, a set of twins who were due in October but arrived on July 22.  So far, they are doing well, so I decided I'd go ahead with my plan and not mail the gifts until the babies were actually home.  That shouldn't jinx things, right?

Anyway, I'm knitting a pumpkin hat and an eggplant hat for them.  It's a boy (Camden) and a girl (Teagan) and I figure neither of these patterns are particularly gender-specific, so their parents can decide who gets what.  First up, the leaves for the crown of the pumpkin hat: 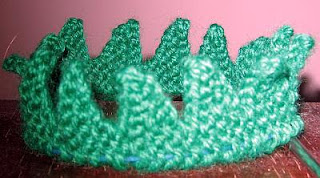 Apologies for the poor photo - I was getting ready to leave the house this morning, and realized I'd forgotten to take a photo to add to this post!  Having made this hat several times over the years, I know that once it gets going, it doesn't take long to finish.

Reading-wise, I am planning to read this today at my lunch hour: 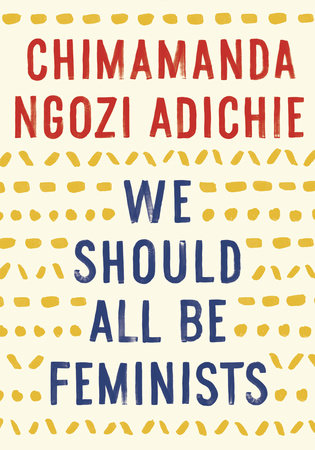 It's short, as it was a TED talk that she gave, but I have been wanting to read it for a while.  I have read a couple of interviews with her, and she sounds pretty awesome.  Plus, ever since I read that she "suddenly" announced she'd had a baby, when no one knew she was even pregnant, I have liked her approach - she said that she considered pregnancy a private thing, and felt no need to talk about it or display herself on social media to a group of people not in her close circle of friends and family.  Being inundated with photos of "baby bumps" (term that makes me stabby, you don't want to get me started!) on social media, I am on board with her idea.  I'm sure others disagree, but as my mother would say, that's what makes horse racing.  In any event, I'm looking forward to reading this.

I'm joining Kat and others today for Unraveled Wednesday, so go over and see what everyone else is knitting and reading!
Posted by Bridget at 7:54 AM
Labels: Unraveled-Wednesdays

Those little fruity, veggie hats are always so adorable on a baby!

I am glad you have help! And, I loved We Should All Be Feminists! It was excellent and I hope you find it so also!

Wishing your friend's grand babies all the best. I'm sure it's been a struggle for the family. The hats you're knitting will be a nice welcome home gift.

Those hats will be just darling! Glad you found help for your sweater.

I avidly dislike that term as well. So juvenile and stupid.
Love the idea of the vegetable hats. Such fun!

I can't wait to see the hats.

I hate the term that one podcaster is using ad nauseum .... tiny human. Well, of course you are having a human.

Is there suddenly something wrong with the term --- baby?????

Those fruit and veggie hats are always darling on little ones. I listened to We Should All Be Feminists and enjoyed it immensely. I wish you luck with the Edie top. It is a nice looking pattern.

Those hats are going to be so cute!!! :-) And I'm so glad you were able to find someone to help you with your sleeve. Knitting errors are the ULTIMATE in frustration to me. . . (topped only by car problems) XO

Great gifts you are knitting. I too felt my pregnancies were a private matter. My belly grew, but my focus at work remained professional and I had plenty of friends who were wishing for babies and couldnt get pregnant. I liked a low profile. I knew people were happy for me without all the hoopla. That being said, I had 6 , yes six, baby showers. People were thrilled for us as we'd lost before.

I thought that maybe that was a Captain Planet/Earl of Ecology crown. But vegetables work, too.

I love the crown (Hamlet wore it well) and the hats will also be very sweet!