Some Randomness for a Tuesday

I forgot to download photos from my camera, so you are getting this post right now instead of the one I was planning to write that had a particular photo for it.  No matter, you'll see it sooner or later.

In the meantime, I'm in the mood to write, but have nothing specific to write about so it's time for some random ramblings from my brain.

1.  One of the local TV stations had a meterologist who is also a big DIY person.  She is always referencing projects she's made/working on, and also posts the results on Instagram pretty frequently.  Lately, she has decided to create a YouTube channel, and the first one is for a yarn ball wreath.  Of course, not being a knitter, she had to buy the yarn to cover the balls, but I give her credit for sharing.  I think sharing your DIY projects would be a recipe for disaster for me, as mine do not always quite live up to my imaginings of them ...


2.  The other day, I overheard someone talking about how many days it was until the first day of summer (no I didn't make note of it because a) I don't care, and b) I try hard to live in the moment).  And I had a revelation.  When Christmas decorations are put out for sale in stores right after Labor Day, people begin to have conniptions about it.  However, when someone starts talking about the first day of summer in January, it's all good.  Puh-leeze.  Don't b*tch about one and say the other is different.

3.  I am currently in a situation at work where two individual co-workers have decided that they are in charge of all of us, particularly me and my work.  Of course, they have no training or background in my work, but they know better.  I am keeping a file of all e-mails, etc. so that I can visit HR at some point.  It won't do any good, because our HR is technically in place, but in truth does nothing for anyone (mostly due to fear of legal reprisal), but I'll have the file should it become such a level of harrassment that I need to take it further.  Most of the time, people take my ability to work with anyone and be flexible as weakness.  However, they have no idea what they are walking themselves right into.  And I have never been one to care if someone liked me or not.  I can be civil and work with just about anyone.  But it doesn't mean I'm not paying attention.  And, as my mother used to say, I'm the sort of person who "would just as soon look at you as go to hell."  (No, I don't really understand it, but I get what it's saying, and to be honest, it's true.)

4.  The other day I was walking down the hall at work and a young boy was standing with his father/brother/caretaker looking at the mummy exhibit.  The adult was explaining how the mummification process works as best he could to the kid.  When he finished, the kid said, "That's a lot of work.  Just put me in the trash when I die."  Which amused me, but also made me think that would be a whole 'nother level of trouble if they followed his direction.  :-)

5.  I had a weird dream last night where Kym invited me to her house for cookies, but then when I got there, her husband said she had moved into a trailer in the back yard and was not talking to anyone.  So, Kym if you are reading this, and that ever happens, please leave some cookies with your husband so I can at least have one or two.  Oh, and maybe think about getting some help?  (WHY did I dream this????!!!  Maybe because I heard a news story about Kalamazoo, and I think she lives there?  Maybe *I'm* the one who needs help ... )

6.  We are leaving on Friday after work for an overnight visit to my niece and her husband in Baltimore.  Hamlet is going with us, and they are dying to meet him.  She sent me a note asking what his favorite treats and toys are, because "we want to be his most popular relatives."  You can see why they are popular with us, right???  ;-)

7.  My sister in California and I were talking on the phone the other day, and she was telling me that her 4-year old granddaughter Ari said she couldn't wait until she grew up so she could be rich.  Nancy asked her how she was going to be rich, and Ari said, "I'm going to marry money, and become a famous 'modeler' (read: model)."  She is the only 4-year-old I've ever heard of who used the phrase "marry money" - which is amusing, but also unsettling ...

8.  The Tim informed me the other day that the Eagles are not in the Super Bowl this year.  Is he on top of things or what???  (Go Rams!)

So there you go, news you can use.  Actually neither, if you think about it.  :-) 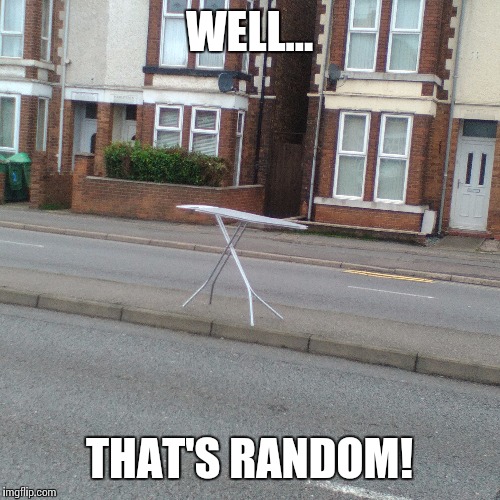 Posted by Bridget at 8:58 AM
Labels: random-stuff

So much interesting randomness! It's sad that you can never get away from Queen Bees, even though you are no longer in middle school. One of my favorite professors had his posted in his office: “Don't ever mistake my silence for ignorance, my calmness for acceptance, or my kindness for weakness.” He was a force to be reckoned with, and I know you are also. I hope you, Tim, and Hamlet have a wonderful weekend!

Oh my... I am not sure if you intended me to be laughing at this post... but I am! Thank you for this witty and hilarious start to my day.

(also, can I just say your work folder is awesome!! LOL)

Re: #4--I like that kid, and I feel the same way. The Exact Same way. I'm the first person to say that my overall feelings about Death and the Funeral Industry/Philosophy in general are pretty dismissive and negative, but if it were an option, I'd rather be tossed in a dumpster someplace too. Truly, though, it's not really going to be my decision, is it?

Of course, as you said .....a whole 'nother box of trouble with THAT plan.

I am so sorry to hear of your work troubles. People like that can really make you miserable. I'd still be teaching if I hadn't had the same type of issues with young hot shot principals who never taught a day in their lives.

OH this is a lot to think on!! Bridget I am so glad you are visiting friends who love your furr baby too

Oh, Bridget! I had so many things to say . . . but then I got to your dream and just lost track of all else! That is so funny!!! Whenever I move to my trailer out back, I'll be sure to leave some cookies for you with Tom. (And, yes. I do live in Kalamazoo.) I think I love your random posts most of all. XOXO

There has to be a way to tie the put-me-in-the-trash boy and the modeler girl. There just has to be.

So sorry about the work situation, I hope it all gets sorted out and that you feel better about things. Just what you need is a few hours away to enjoy your family. Stay warm and safe.