I have to tell you that I got a big charge out of your responses to this post.  As I said at the beginning of the post, most people have at least one or two interesting stories about their lives or family members.  And in the case of children, I think most of them assume that all families are like theirs, until they go out in the world more and realize that perhaps that is just not the case.  I *may* have spent a lot more of time realizing that than others I know ...

In any event, the first story is true.  I did in fact learn the knit stitch from the lady across the street whose house burnt down when the dryer caught fire.  She thought it might be a good way for me to entertain myself while I was home sick.  And I did find it fascinating, even if there was no additional time spent with her to learn more.  No one in my family at that time was crafty at all (though later my mother would become an expert in counted cross-stitch), and that was one of my first introductions to the kinds of things you could do to create fabric.  I didn't get another chance to even think about learning to knit for 30 more years, but alls well that ends well, right?

As for the second story, I had the opportunity to do so many things I would have never been able to do thanks to Rosie's father, the mobster!  Of course, he was always so nice to all of us kids, and though we knew he was "famous," we largely didn't know details or care, as long as he was able to pay for all of us to go to movies, plays, concerts,the circus, etc. in style.  Rosie and her younger brother knew at a certain point all about their dad, and I can remember once in school that our teacher was going around the room asking what our parents did at their jobs, and Rosie - rather than saying whatever "legit" business her father had - responded, "he takes care of people who get in his way."  Most of the rest of the kids in the class had no clue what she was talking about, and the teacher quickly moved on, but I found it hilarious because via my parents (who knew lots of shall we say, "independent businessmen," and were not ones to use euphemisms with us), I knew just exactly what Rosie's dad did for a living.  About 20 years ago, he died of cancer, which always seemed ironic to me. 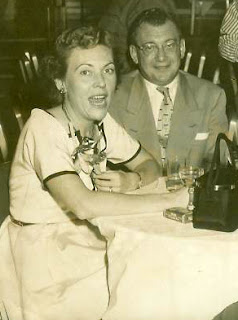 And so that leaves the third story, which by now you know is not true.  It was, however, a story that my mother loved to tell people, "to see how goddamn stupid they are."  Of course, growing up, we learned immediately that being gullible in our house meant that you would be tested every minute, and I still think that is why I am not an automatic believer of most people.  When I was in college, my mother worked in the Development Office of our school, and so many students who would have part-time jobs there would come up to me and say, "Wow, I didn't know your parents used to be a nun and a priest, that's crazy."  At first, I would set them straight, but after a while I didn't care enough to do so because most of them didn't talk to me otherwise, ever.

To paraphrase the opening of this show, "There are a ton of stories like this in our family.  These are a few of them." 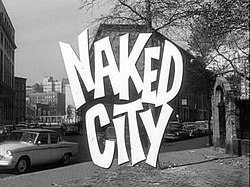 Leo Tolstoy is quoted as having said, "All happy families alike; each unhappy family is unhappy in its own way."  I'm not sure what he would have said about mine ...
Posted by Bridget at 6:52 AM
Labels: family, friends, knitting

LOVE! Oh man - I think I would have dearly loved your mom! LOL

So, how many readers (other than old me) are getting the "Naked City" shout-out?

Oh wow! I was right!

Your mother must have been quite the character! My grandmother worked at my high school as the attendance secretary and it was an never ending source of humiliation to me. I couldn't get away with anything.

I was wrong but it was just a guess. Your Mom sounds like quite a character. Also, what an interesting childhood. Your experiences are beyond anything that would have happened in my little hometown.

Oh, your mom!!!! I always love your stories. They are THE BEST. XOXO

your mom is the very best :)

Oh that story is fantastic. This was fun!!!