Today is not just Christmas, it's my niece Liz's birthday! Here's Liz in 1977, celebrating Thanksgiving in a way that was not politically incorrect at the time: 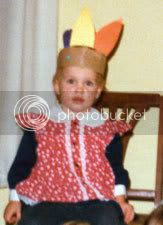 From the time she was a baby, Liz had a great personality. She had the advantage of having a sister who was two years older, so she learned to talk pretty quickly, and would happily carry on conversations with you even if she was the only one who really understood what was being "discussed" ...

We always used to say that when she grew up, it wouldn't surprise us if she became a rock star. She loves to sing and has a great voice, and is known particularly in the family for one performance where she was singing a Tina Turner song for us, but with a bag over her head so she wouldn't have to look at us while singing ... 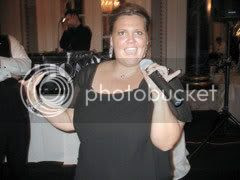 Here she is now - no she didn't become a real rock star (other than to all of us who love her), but a social worker, and as of last February, a mom. This picture is from her older sister Amanda's wedding, at the end of October. She is singing "Last Dance," which was the song that ended the reception that evening. This is the kind of thing that has given her the nickname La Liz!

Liz is pretty, she is smart, kind, and just fun to be around.

Happy Birthday La Liz! You are the best!


To Liz and to everyone else: Merry Christmas!!

Happy birthday to Liz and merry, merry Christmas to you!

p.s. my birthday is March 16th. i'll be happy to email you a baby picture.

merry christmas and thanks for the b-day wishes!!

Happy Birthday La Liz! A very Merry Christmas to all!