A Great Way to Spend a Saturday

Yes, I'm still here! I know I've been pretty incommunicado this past week. I would like to say it's because I've been busy writing a book that is a guaranteed best-seller, or I was away on a luxurious vacation, or something like that. But, at the beginning of the week, I was sick, and for the rest of the week, I was trying to catch up on the stuff that I didn't do because I'd been sick. So much for the glamorous life ...

Anyway, back to the subject line. Yesterday I had one of the best knitting days ever. I spent the day at Loop, taking a ganseys class from Beth Brown-Reinsel! Yes, that Beth Brown-Reinsel, the one who literally wrote the book: 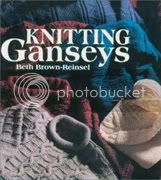 From the time I learned to knit, I have wanted to learn the techniques to knit a gansey, as I love the look of them. So when the opportunity to learn from a true expert presented itself - and at a location literally around the corner from my house - you can bet I signed up!

There were about ten of us in the class, including Craig, the owner of the store. Beth had brought a lot of samples of ganseys that had appeared in the book, so we could see them in person, as well as a bunch of patterns and samples of her other work. I always thought, looking at the book, that her designs were pretty cool, but seeing them in person - and in living color! - was another thing altogether.

The goal of the class was, obviously, to learn to knit a gansey, by learning the various techniques that were necessary to be successful. Beth gave us a bit of history of the gansey, as well as explaining the origins of some of the classic patterns, and also showing us examples of more modern patterns that could be incorporated. Then we got started. Like any new thing, at first it was somewhat overwhelming, and as usual, I was the slowest one (not necessarily as far as understanding what to do, but in the knitting necessary to get there). Beth said at the beginning of the day, that by the end, if we had the body and neck of our mini-ganseys done, and were ready to add the sleeves, she would consider the class a success.

During the course of the day, there were times when I thought that if I could just get to the top part of the sweater, I would consider the class a success ... but as the day went on, I realized that I had actually benefited from being the slowest. Because I had the chance to hear her explain and re-explain things to several people in the class. This turned out to be a good thing, since there were things that I knew to be on the lookout for, or to avoid doing so as not to have to start over, etc. And guess what? By the end of the day, I had the body and the neck of my mini-gansey finished!

Not only that, but I had learned two new cast-ons (Channel island and provisional - provisional being one that had been shown to me quite a number of times, and never ever registered before - I get it now!), how to make welts, gussets, include knitted-in initial, and a good overview of how to go about designing your own gansey. Beth gave us great handouts, and the pattern was both written out ("in excruciating detail" according to her), and charted. It was a great chance to get used to knitting from a chart for someone like me. Since the charts we were using were so small - meaning so few stitches to any given round/row - I got more comfortable with how to read a chart.

Most importantly, Beth Brown-Reinsel turned out to be one of the nicest and most personable people I have ever met. You couldn't ask for someone better to teach something that requires so much of your attention. She was great at explaining things, and showing you how to do it, or where you made any mistakes, and how to fix them. She went around the table asking each person to talk about how they learned to knit, and when. She had a great sense of humor, and one of the prettiest smiles I've ever seen on anyone!

If you are interested in ganseys, and ever have a chance to take a class from her, sign yourself up! You won't regret it for a second. Trust me, there are not that many things that would make me give up an entire Saturday, and this was more than worth it.
Posted by Bridget at 2:34 PM

What a wonderful way to spend the day. Your patience and perseverance certainly paid off as well.

Enjoyed your post and wonderful description of the class. I hope I can find this book in the library this weekend as you've made me want to read it.

Hope you are feeling better. I am still trying to catch up from having the crud a week ago.