Today He Is a Fountain Pen

According to my Jewish brother-in-law, that's what they say to a thirteen-year old boy, when he has his bar mitzvah ...

Well, he isn't having a bar mitzvah, but today is Sebastian's 13th birthday. Seb is Tim's Little Brother, through the Big Brothers/Big Sisters organization. We first met Seb about three years ago, when he was about 10 years old. Here's what he looked like then. 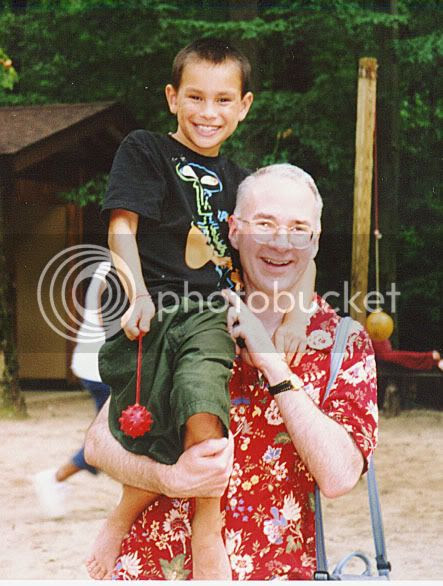 As you can see in this photo, he was quite possibly one of the cutest kids on the planet! And from the beginning, he was such a character, and so much fun. He and Tim took to each other right away, and it was literally a match made in heaven.

Then there was Seb's 4th grade school picture, where he thought it would be cool to have his hair styled in a mohawk.

Tim and I found this hilarious. His mom, Karen - not so much ... 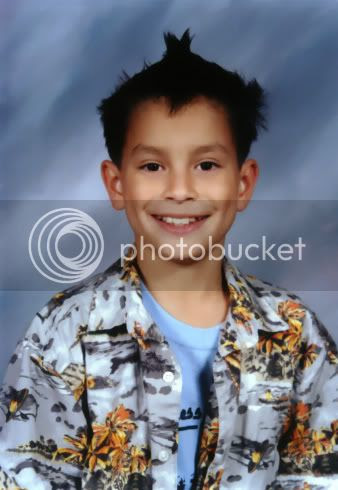 But it only goes to show you how great a sense of humor he has, and how much fun he can be. From the beginning, he has become one of our very favorite people, and a part of the family. That even goes for the extended family, as he and his mom have been included in family events like one niece's baby shower, and another niece's wedding.

It is not hard at all to love Sebastian. He is, as I have mentioned, a lot of fun, and has a great sense of humor. He is incredibly smart, and can carry on a conversation with an adult without blinking an eye. He is definitely one of the most well-mannered, considerate, and kind persons I have ever met, which is a testament not only to him, but to his mother who has raised him to be the kind of person we should all be so lucky to have in our lives.

I will admit that I often go out of my way to test his patience. Like recently, when we went to hear the chorus sing at his middle school. (He is in the seventh-grade section.) As we were leaving the school building, we were in a real crunch of people. Seb and I were ahead of Tim and Karen, so I said, "Hey Seb, if we run into friends of yours, you should introduce me as your girlfriend, wouldn't that be funny?" To which he just rolled his eyes (which I know he didn't think I caught, but I did), and said, "I don't think so." Then I said, "Well, you can tell them we are married, *that* would be really funny," and he just shook his head and walked faster ahead of me ... 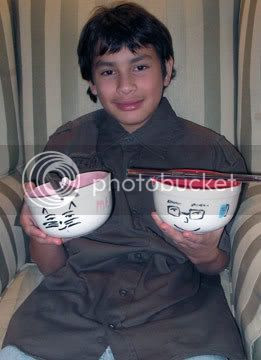 Among his other qualities, he is also artistic. This is logical, since his mom, Karen, teaches fashion design here in Philadelphia, and his father, Fernando, is a well-known artist in Oaxaca, Mexico, which also happens to be where Seb was born (which makes him more of a world traveler than me, from the get go!).

This Christmas, he made each of us rice bowls (we eat a lot of stir fry), with illustrations that were indicative of our interests. Here he is today, modeling his artwork. The bowl on the left is mine, and has not just a cat face, but a dog face; Tim's bowl, on the right, has a "portrait" of Tim, but also illustrations for books and music, two of his favorite things. You can also see from this picture that Seb looks like a teenager - oh no, he's growing up!

To celebrate his birthday, we all went bowling. Seb and I turned out to be the King and the Queen of The Gutterball, at least until we got warmed up. It was a lot of fun, and we were glad to be included in his birthday celebration.

So, even though he may outgrow us, we will always think of him as our very own boy. For better or worse, he is now stuck with us, as well as with our extended family.