The Wednesday night after Thanksgiving, I headed up to the nearby Barnes & Noble with Tim, because Patrick McDonnell, the creator of Mutts, was going to be signing his newest book, Just Like Heaven: 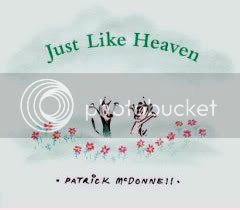 I am a huge fan of Mutts, and was really excited to get to see Mr. McDonnell in person, and get a signed book. A few months prior, he had appeared at a B&N in one of the nearby 'burbs, and though I didn't get to go to that event, one of Tim's co-workers did go, and she brought back a couple of different books signed by him. I was thrilled to pieces with those, so you can imagine my anticipation at "meeting" him myself!

He was there to kick off the Toys for Tots program, since the poster for this year showed the Mutts characters, and because he has been involved with the program, quite successfully, for a number of years now.

He read Just Like Heaven to us, as well as The Gift of Nothing: 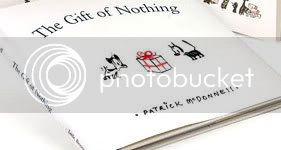 Then he took questions from the audience. While he was answering questions, he would draw different characters from the strip, and talk about his inspiration for them. He was really interesting, and extremely personable, answering all and any questions asked of him. He told some funny stories, two which I thought I would share.

As readers of the strip know, Mooch, the cat, always says "Yesh," and originally that is the only thing he was going to say that way. But as Mooch developed, it just seemed like he would pronounce his "s" like "sh," so that continued. Mr. McDonnell received an irate letter from a woman, saying that it was an absolute disgrace that Mooch spoke in such a sloppy manner. Apparently, the letter went on for a bit, complaining, and only at the end, did he find out why the woman writing it was so incensed: because she was convinced that her cat would never speak that way! That in and of itself was amusing, but Mr. McDonnell said he sent a response to her, and all it said was: "Shorry!"

I knew I would find more reasons to like him!

The other story involves the characters in the strip going to the Jersey shore every summer. Mooch and Earl (the dog) usually run into Crabby (a crab), who generally says things like: "##$!!*&^" - and of course, Mooch and Earl understand him. Well, another reader wrote, because he was extremely upset that "Something so dirty would be published in what was supposed to be a family comic strip" - to which I can only respond like Crabby, to be honest with you. :-)

He talked more about his growing up in New Jersey, his art school experiences, and how he got started with the strip. It was so cool, because basically he is just a nice, normal type of guy, who is fortunate to be talented. He also talked about his work with the Humane Society of the United States, and other animal-related organizations. The strips he does twice a year called "Shelter Stories" apparently not only get a huge response from readers, but cause a spike in the adoption rates at shelters nationwide, which I just really loved hearing.

After the questions were finished, he signed copies of his books, as well as Mutts bookmarks. He spoke to every person in line for a few minutes, as he was signing, and was very attentive and really nice, even after what was probably a long day for him.

A schwell evening, indeed.
Posted by Bridget at 7:37 PM

I'm jealoush! I absolutely adore Patrick McDonnell - he captures the essence of all the animals he draws, and also the humans!

I always look forward to the episodes with Chickpea and Chickpea's brother.

Hmmm-I myself have not nearly as much as I should in recent years. This looks like good reading for my girls, as well as, me! I'll have to try these, thank you!

you know how jealous i am...especially since i totally forgot to go...i just hope you know that i have access to your house and that i'm not above tossin' a brick through your window...the doctor says i need to productively work out my issues...but i'm more than willing to settle this w/ duelin' pistols if you'd prefer...it's your call irish...