A couple of weeks ago, those of us who live in Pennsylvania had a "two-fer" day on April 22 - it was Earth Day, as well as the Pennsylvania primary election. As a person who tries to be environmentally conscious, Earth Day is always a good reminder to me that I can keep trying to do more. As a person who loves to vote, Election Day is always something I look forward to very much.

By now you all know the results if you care, and if you don't, you don't. But the closer that we got to the actual day of the primary, the more calls/flyers/ads there were, trying to convince us to vote for individual candidates. For the most part, this drives me crazy. I make an effort to pay attention to who is running for what office, and what they have to say. Like everyone else, I interpret it for myself, but I usually have a good idea of who I want to vote for, and why. (This year being an exception, I must admit. I was finally somewhere that was "important" for the election, and I was totally uninspired. But I digress.)

The real kicker for me, though, was the actual day of the election/Earth Day. I got home to find this waiting for me: 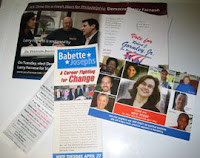 Paper, paper, everywhere! And this is just what had been left at our doorstep or in our mailbox in the afternoon, as The Tim had already recycled the morning's amount. There it was, Earth Day, and we were being blanketed with paper! I could only feel dismayed at the thought that a lot of it would not be recycled, and that there would be random pieces littering the street for days afterwards (yes, and yes, in case you were wondering).

We want our candidates to inform us of their views on saving the planet, while they are also inundating us with pieces of paper that very few people take the time to read, and many never "bother" to recycle.

With apologies to Alanis Morissette (am I hip or what?), isn't it Ironic? It has stuck with me since that day, so I decided to use Irony for the letter "I" in the 2008 ABC-along.

Now, before you get all preachy and worked up over politics, direct mail, and the cost of gasoline, let me tell you that I know how it works. Politics and Propaganda was not one of my favorite courses in college for nothing (oh, propaganda how I love thee!), and face it, we've all been exposed to campaigns long before we can vote for president, senator, etc., when we are voting for class president, or homecoming queen, or whatever else comes along once we are part of any group.

And yes, I know that Al Gore, "Mr. Save the Earth" himself, sent out campaign flyers when he ran for president.

I just think it's ironic.

(That hurts to see that even though I deliberately typed it! Make it go away!)

My brother's birthday was the 23rd. He said he was most looking forward to it because the phone would stop ringing.

Are those four color glossy ads even recyclable? It would be easier if they were black and white ink on recycled paper...

Boy, I thought Canadians were nuts. I can't get over the big production this campaign is.

I'm right there with ya.

That is too funny. I love ironies. Just overwhelmed here these days - hope things are going well for you!