This past weekend was a 50/50 one.  Saturday was kinda lousy, Sunday was much better.  Basically Saturday morning The Tim and I had a huge misunderstanding about plans, and it just irritated me so much I wanted to spit.  I did get over it eventually, and I did some laundry and baked a few cookies to keep my mind on something else, but it ended up being a frustrating, wasted day.  I hate when that happens, but I especially hate it at Christmastime, when I have things I really want to do, and instead I let my mood distract me.  In the end, yes it was nice to have baked some cookies, and have finished some laundry, but frankly those were not high on my list of what I wanted to accomplish on Saturday.  Such is life,  First world problems and all of that.

Sunday I made up for a lot of what I didn't get done on Saturday by getting an early start, and - yes, I actually did this and not for the first time - set our kitchen timer so I would work on things for a minimum of time before allowing myself a break. And then even the breaks were timed!  This is what it's like when you are me.  I don't do it a lot, but when I do, it works pretty well.  But even I can admit it's a little bit sad ... ;-)

So that's the overview.

One of the things I thought would be a great idea on Saturday afternoon, since it was sunny, was to take photos of the Turn A Square Hats and Portfolio Scarves I'd knit for Christmas gifts before I wrapped them up and sent them to their respective recipients.  The Tim and the cats were all dozing, so it seemed like a good time to work without interruption.  And that should have been my first clue that I was being delusional.  Because although Jetsam and Milo the Koodle pretty much stayed asleep the whole time, and just showed up at the end to sniff, Pip and Jack decided that I couldn't be trusted to accomplish this task on my own.

At first, they were each sitting in a window in the guest bedroom where I was going to take the photos.  The light is decent in there when the sun is out, and the bed has a white bedspread, which would work well for contrast.  I got everything set up for the first idea I had for photographing things, and the second I grabbed the camera, both cats jumped onto the bed!  Because of course why wouldn't they?

I tried various distractions to try and get them to leave the room, but really when you are the world's most annoying helpers, why would you leave?  Every time I would try to pick one or the other up to move them, they would get their claws stuck, and I didn't want to risk harming the knits.  So for a couple of minutes, I let them enjoy their hilarity.  Once that was done, they each went to another part of the bed and started to get ready to nap or to take a bath.  Well, until I started taking pictures, that is.  After a while, I just gave up and tried to do the best I could.

Granted, I'm not Richard Avedon.  But I did just want some nice photos ... maybe even one that looked a teensy bit artistic. 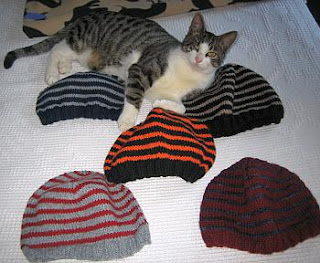 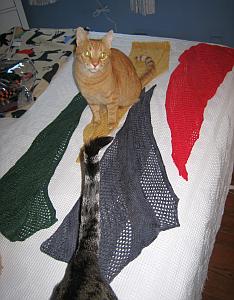 "These would be more comfortable if you could bunch them together."
(Now with bonus Jack butt!)

I tried a few more shots, and got some that might work after some editing.  But clearly the next time, no matter how zonked out the feline members of the family may seem to be, I'm closing the door!
Posted by Bridget at 7:08 PM
Labels: 2016-knitting, cats, Christmastime, Jack, knitted-gifts, Pip

I love the photos and think Jack's butt is perfectly artistic! It's hard enough to take photos at this time of year with the lack of light, but when you have helpers, even more so. My photos are gorgeous (in my imagination only!).

Aw - can't get mad at cute photobombers like that!

Oy-cats. I find that they either won't look at you when you are trying to photograph them...or they photo-bomb every other picture. Your hats and scarves look beautiful. You really got a lot done!

All photos are enhanced by CATS -----at least in the cat's opinion.

The hats look great too!

My kitties do that too. They never come near me until I get out the knitted stuff then they have to plant their behinds on it. I have remember to put it away at night where they can't get it or they will drag it all over the house and even chew on it.

I think your photos are enhanced by CATS! It's always a challenge to get nice photos of handknits -- especially in the winter and even more so when there are multiples to photograph. I love your photos -- WITH cats, please. (And your knitting is wonderful, by the way.)

lovely hats and scarves!! you have been a busy knitting bee :)

You really did a lot of knice knitting! And I'm with Dee--all photos are enhanced by the presence of Cats, especially in their opinion.

(Which, to them, is the Only Opinion Which Matters. Ever.)

What fun! Did you notice the "featured" assistant found a knit that coordinated with their own outfit?

When I had piles of essays and research papers to grade, I'd set a timer for breaks. It made the task more manageable and enjoyable.

I love the cats in the middle of the photo shoot. All of your projects are wonderful Bridget!

You captured that sense of frustration so well. I know what you meant. I get it's not the end of the world but it's still a real feeling.

I LOVE the pictures of the cats interrupting your photo shoot. I think their helping definitely enhances the photos, ha, Jack-butt and all! The cat amongst the hats? Like he just happened to be lying there and YOU put down all the hats is hysterical. You just need an animated gif of him waving his paw over it all as if saying, "all this, all this hat/yarn loot is MINE!"
so funny.

I love Jack more and more.

Looks like you have some adorable helpers with your photo shoot.