Hello there - I hope you are all enjoying and/or surviving December.  Thanks for all the nice comments about my post welcoming the month.

Remember the cold I had, that had started to worm its way into my system over Thanksgiving?  Well, for a couple of days, it acted all casual, like "OK, Bridget, I'll give up and you can feel better, no big deal."  And I was pleased about that.  And then, the Universe apparently stepped in and said, "Nope.  You're gonna have to feel a lot worse before you can even *think* of feeling better."  And I have NOT been pleased about that.  I have, however, carried on as best I can (even if I basically was just able to function well enough to go to work, and then would come home and crash), so I feel that the joke is [mostly] on the universe.   Because in spite of its efforts, I've still been happily thinking about it being Christmastime, listening to Christmas music, and reading Christmas-themed books.  Granted, I have also been taking medicine, cough syrup, and cough and throat drops.   But. Not. The. Point. ;-)

However, as a result, I am behind on things, so I have decided to extend the deadline for anyone who wants to participate in the Great 2016 Holiday Snail Mail Card Exchange, to the end of the day on Tuesday, December 6.  Then I'll send out the list to everyone on Wednesday, December 7.  So far we have a few people, so I think it will be easily manageable for everyone involved, and anyone else who would like to join us.  So please do, the more the merrier!

We did something we haven't done for a while last night - had a small gathering and a dinner party.  We had originally invited people for the day after Thanksgiving, but since both of us were sick we rescheduled for last night.  It was pretty low-key, and nothing very complicated was served, and we had a great time.  Though no one left until about 1:30 a.m.!!  I cannot remember when I have been up so late on purpose, and I was pretty useless today as a result.  But it was worth it.  Though I think the most exhausted family members were the cats ...

This week our Christmas plans and preparations really go into gear.  The Tim is planning to bring the boxes o' decorations up, and we'll go and pick out a tree.  So exciting!

I hope all of you have had a good weekend, and are not feeling crummy at all like I am!  I'll be back soon with more ramblings.  Have a good week! 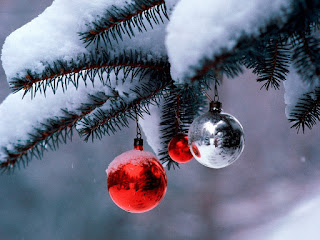 Hope you kick that bug soon!

Guests not leaving until 1:30 am sounds like a clear sign that everyone was having a great time! Hope you're feeling better and laughing at the universe (but not too much, the universe has been known to take further revenge).

I love gatherings with friends. But I cannot stay up that late. I've been known to kick people out when it got too late!

Oh yikes! Sorry you are still feeling crappy. Hope the "bug" leaves you soon. I'm trying to catch up on blogs and everything else after being out of town. Geeze...3 days out and I'm a wreck! An d feeling older each and every day - LOL

Can't wait to see your tree.

I love seeing how people decorate their trees. They are all unique and ALL beautiful.

Hope you are feeling better this week!

Ugh. So sorry you're still not feeling great. Although it sounds like you're not letting it get in the way of things you want to do -- so that's good! Your month is off to a great start. Enjoy. XO

Knock on wood, I haven't had a cold in ages but I know how bad they used to be. Feel better!

Darn it! Above all else (pretty much), I abhor Being Sick. How you had a dinner party whilst ill, I will never know.

Definitely not a great time of yer to be sick. Glad you had fun at your party, now rest!