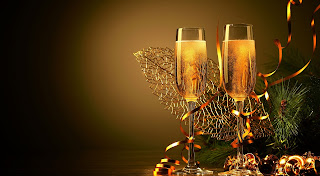 For this week's Think Write Thursday, Carole and Kat asked us to write about New Year's Eve - like or not? Celebrate or not? Musings?

I'm one of those people who enjoys New Year's Eve.  The only time I haven't enjoyed it was the year in high school when I babysat for a couple on New Year's Eve.  First of all, I wasn't really into babysitting. Secondly, they didn't get home until 3:00 a.m. and then they were still drunk.  Fortunately, I lived two blocks away so I didn't have to be driven home.

I've never been one for big parties, though I would have liked going to New Year's Eve in Times Square before that got ruined by TV "events."  Growing up, my parents were either home and had people over to play cards, or they went to friends' homes to do the same.  I used to like staying up and watching the ball drop, and thinking "Wow, it's another year."  I have to admit that the idea still kinda amazes me.

But our New Year's Eve is lovely, if what others might think of as boring.  The Tim usually has to work, but fortunately the bookstore closes about 6 p.m.  So we usually go out to dinner somewhere in the neighborhood, and then come home for the rest of the evening.  Around 10:30, we get the treats ready - always a Christmas cheeseball, often some steamed shrimp, and whatever else appeals at the time - and the champagne.  At about 11:55, we toast away the old year.  Then we watch the ball drop, have our little family "Happy New Year" exclamations and kisses, and have more champagne.

New Year's Eve does make me nostalgic, though.  I miss family members, places, and things.  I feel sad that another year has passed and will never be again.

But in the end, if I am able to celebrate New Year's Eve and New Year's, it means I've made it.  And though every year has it's goods, bad, and uglies, I'd still rather be here than not.

I'm thinking of the going to bed early as a great way to get a jump on the new year - I'm going to wake up early on January 1st and not feel hungover, and start the great new year with gusto. It wounds like that's the way you will be doing it, too!

It sounds like you have a lovely celebration for New Years. For the past few years we've attended a large, loud party. This year we are staying home and I'm so looking forward to it. It will be fun to watch the ball drop and toast in the New Year. I wish you the best, Pat xx

I've attended one actual New Year's Eve party in my life; obviously, I prefer a quiet evening at home.

New Year's for me has always been about potato chips and onion dip. My mother always had a party and we would get a taste of the forbidden goodies just before we were sent off to bed-or really to sit on top of the stairs and watch all the grownups having a ball doing the twist in the living room below. Good times. The Mister and I don't do much of anything. One year we made a fire in the outside fireplace and roasted potatoes and cheese and watched the new year come in under the stars. It was a good time but too much work for us old folks these days.

Bridget- I am not a huge party person myself. Laura usually wants to play a board game, and we did Mystery Date last year.

Sounds a lot like ours except the dinner out. Being married to a police officer we usually don't get to spend NYE together. I totally agree about the "old" Time Square-just not the same with all the commercials and no Dick Clark.

Memories are the best part of New Year's Eve. Wishing you a very happy 2017 XO

We spend it the same as you do....quietly at home. Hoping the next year goes smoothly for us all.