In Which I Try To Figure Out Why I Leave the House; or, To Quote My Mother, "Oh For God's Sake!"

Seriously, I just have to wonder sometimes.

This coming weekend is the Women's March on Washington.  When it was first announced, I really wanted to go, but I knew it would be a tricky thing for me financially. Then they announced that there would be a march in Philadelphia as well.  I was so excited, and signed up right away!  I was thrilled that I would have a chance to do something active to show that I was not a supporter of the ascendancy of the Orange One.  Some friends were also planning to go, and whether or not we went together, I was just happy that so many were participating.

I encouraged people to sign up.  I supported the whole Pussy Hat idea though it's not my cup of tea.  I kept thinking that the whole experience would make me feel like I was and could be doing *something* even if it was not everything I could or would hope to do.

But as it turns out, while everyone else is at the various marches, I'll be at home, able to support them in spirit only.  You may be asking yourself, "WTF, Bridget?  Why the change in plans?"

Let me introduce you to The Broken Ankle of Doom. 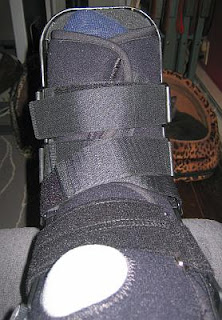 Or, as it is more commonly known, my own right ankle.  Which is now broken.  Because why not?

Last Wednesday, I was walking home from work, and walked past a bunch of the workers building the new(er) Comcast Building (as soon Philadelphia will likely become Comcastadelphia, but I digress).  One of the men bumped into me, and I turned my ankle.  It hurt, but it often hurts when you turn your ankle.  I continued home, did some stuff that evening, and when I went to go to bed, I noticed that my ankle was really swollen.  I put an ice pack on it overnight.

In the morning, it was even more swollen and incredibly sore.  So I determined that I should have it looked at, in case it was a really bad sprain.  Rather than spend tons of time at the ER, I decided to stop at the Urgent Care place on the way to work.  Where they took x-rays and determined that I had a broken ankle.  (Thanks, Comcast.)  They put a temporary splint on it and told me to get a permanent cast within 24-48 hours.

I called the place they suggested, which is a really well-known orthopedic institution, and was told they could see me on TUESDAY (remember, I was calling on Thursday).  I told them that the Urgent Care place said I should get it set and cast within 24-48 hours, and the woman on the phone said, "Oh, they always say that, it doesn't matter."  This just rubbed me the wrong way, so I called the orthopedist I'd seen for a problem a few years back, and her office scheduled me on Friday morning.

The good news:  it's a clean break, and in alignment.  The dr said it was the best possible outcome, and would mean it would be very unlikely that I would have to have surgery.  Also because of that, she put a walking boot on it, so I can still take a shower (for which I - and anyone else around me - am truly grateful!).  I'll wear it for four weeks, they'll do more x-rays to see if it's healing properly, and then if all is well, I'll wear it again for 2-4 more weeks.  She also said as time goes on, I will likely be able to switch from crutches to a cane.

So though I am depressed and frustrated about the whole thing, I'm also incredibly grateful and relieved that it is not as bad as it could have been.

Today was my first day back to work (we had MLK Day off), and it was pretty brutal.  Not the least because none of the elevators in the building were operational. Which is not a completely uncommon occurrence.  And I had to go back today, or be placed on temporary leave and not be paid.  Ugh.  I managed, but what a mess!

ALL I WAS DOING WAS WALKING HOME FROM WORK.  So I have to ask myself, WHY do I leave the house???  Sigh.  I can hear my mother saying not just "Oh for God's sake!" but also hear one of her favorite expressions, "It's either an *ss or an elbow."

So that this is not a complete self-pitying post, I can say that at least I've been able to finish two books I was reading, and the pair of socks I am knitting for myself are nearly finished!  Not that I'll be able to wear them anytime soon, but I was kinda thinking of doing the thing where you try to knit a pair of socks each month, but put them away and don't start wearing them until next year.

And the crutches have been a joy for the cats, so there's that.  Now instead of just weaving in and out of my legs as I walk, they can also weave in and out of the crutches!  And Jack is having a wonderful time attacking them and knocking them over while they are propped up next to the bed overnight.

And when you think about it, isn't all worth it, if you can entertain family members?

For any of you marching this weekend, Godspeed.  I'll be there in spirit at least.
Posted by Bridget at 7:55 PM
Labels: broken-bones, medical-stuff, women's-march

I'm sorry - I had to laugh about the cats and crutches!

I hope you heal well and quickly. I'm amazed I've only had two broken bones with the amount I fall down! (I tripped on my nighty and broken my collar bone when I was a toddler, and in sixth grade I slipped on the ice and broke my wrist).

Oh, sweetie! I was just coming to ask which march you'd be at... I'm so sorry the answer is the march of the injured!

No surgery is excellent, though. And time to knit and read is also good, even if there are exhausting bouts of annoying work in between.

Sending you the fleetest of healing vibes...

Bugger! Hope it heals up quickly (and well).

Oh, Bridget, I'm so sorry to hear about your broken ankle! Glad though that you don't have to have surgery for it at least. Our choir has an all day workshop on Saturday that was scheduled way last fall, so there will be a bunch of us with the marchers in spirit, I think. Heal quickly! And sending hugs.

Oh no!! What a bummer! I broke my ankle years ago when I was in the last half of my eighth month of pregnancy. Had to have a cast on for six weeks and a boot for a bit after that. It was a nightmare. Had to have a c-section. So I'm feeling your pain. At least you won't have to have that hard cast on so that's good. That thing was awful! My knitting needles were not only used for knitting during that time but doubled as really good scratching sticks. They fit perfectly into the sides of the cast. The crutches were no picnic either. And the horrified looks I got everytime I tried to go somewhere....I was a sight for soar eyes. LOL I am sending you healing thoughts and lots of simpathy. Take care and we will be marching for you!

Yikes! Bridget, I am so sorry to hear this. It amazes me with something like this you can still write a humorous post! So glad you don't need surgery. Hoping the cats don't trip you up and sending speedy healing thoughts and wishes your way.

Comcast is awful in so many ways, but this is the worst! Wishing you working elevators, no further injuries (to a** nor elbow), and lots of knitting, including extra-fast knitting of bones.

sorry about your ankle what a bummer! I hope it heals quickly without complications. You can march in spirit!!

Oh Bridget! :/ Speedy healing to you! And, I will march for your this weekend!

Oh for heaven's sake. You poor dear. And you've been nothing but Wonderful And Pleasant And Kind.

You know what that means.

Bridget- There is a bright side to this, at least you won't have to suffer the indignity of the Pussy Hat.

Rude of the workers to crowd the sidewalk and bump into you. I'm glad that you persisted in getting it checked out by a different ortho than the one recommended, and thrilled that surgery is not necessary. About the elevators at work - stay in the lobby and call HR: they can make accommodations for your situation - it's the law.

Get some rest and elevate that foot as much as you can.

Oh, no! I'm so sorry! Here's wishing you speedy healing, working elevators, and smooth "crutching." (At least you can knit and hold a book . . . ) XO

Oh good golly!!!! That is a big ouchie. I'm marching on Sat here in DC and I've been living in fear all week that I'll get sick. I've got a migraine today and I'm even skipping Daddio's visit tomorrow because they called to say they have a flu outbreak at the nursing home. That wouldn't scare me off usually but I have something IMPORTANT to do Saturday. If I make it, I'll be thinking of you!!

Oh my gosh. Im so so sorry. I cant believe there wasnt incredible pain as it broke. Get better ! keep knitting! Im watching the march too with my hats already in a marcher's hand ready to pass it out. I'll be there in spriit too. Big Hugs to you. GLad it wasnt your wrists that broke.

"Oh for God's sake" is right. I won't be marching either, we're leaving the country on Inauguration Day (only temporarily) (maybe).

Oh man. "Just walking home." Wishing you a speedy recover and is it wrong I love that the cats love the crutches?