The First FO of the Year!

Uncharacteristically for me, I already have an FO for 2017!  This pleases me very much. Last year, I noticed a lot of people were participating in the Box o' Socks KAL, where you knit a pair of socks each month, tucked them away in a special box, and then starting this year, you had 12 new pairs of socks.  I like that idea, and though I did not in any way formally sign up for this year's version, I've decided to try and do it for myself and see how many pairs I can end up with.

Because at least in my case, the minute I sign up for a KAL, I seem to lose the desire to knit, or I get sick, or something else happens that keeps me from picking up the needles on said project.  So I'm just gonna see where this leads me. I mean, I love to knit socks, and I only have about three pairs for myself.  As I mentioned before, this year is gonna include more knitting for me, so how better to start the year than with a pair of socks for myself? 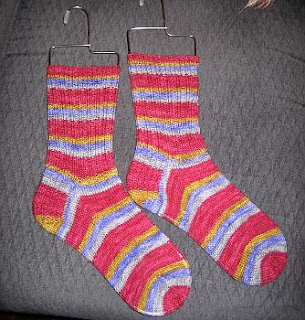 Project:  Ms. Dumbledore Socks
Pattern:  Classic Socks for the Family, by Melinda Goodfellow (my go-to pattern)
Yarn:  Brit Sock from Nomadic Yarns, in the colorway Dumbledore
Needles:  US 1 1/2
Modifications:  I made the leg and foot a little bit longer, for more comfort
Notes:  I am thrilled with how these turned out - especially since they actually match, which is dumb luck, nothing on my part.  (Frankly I can't be bothered to do anything extra to make it happen.)  And I started and finished them in 16 days, which is crazy fast for me.  The woman behind Nomadic Yarns, Ashley, is a former co-worker from Rosie's Yarn Cellar, so I enjoy seeing the color combos she comes up with.  This yarn is pretty easy to work with, and unlike the ball of yarn I used for the Vacation Socks for The Tim, which was somewhat splitty, this ball was just fine. 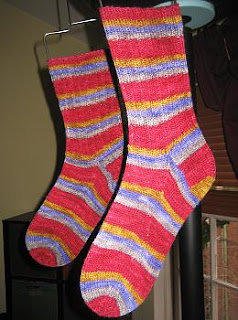 Not a bad beginning, huh?

And I already have another pair of socks on the needles, as well as a hat.  I'm going to strike while the iron is hot, since inevitably, there will be some point when I'm just not in the mood to knit at all ...
Posted by Bridget at 7:10 PM
Labels: 2017-box-o-socks, 2017-knitting, fos, socks

Those great socks are an excellent beginning, and I bet you'll finish more this year! Way to go!

Yay for you! Your socks look grand. Love the yarn...a quick look at her Etsy shop revealed yummy yarn and fun bags... I could be in trouble!!

They are a very happy color!!! Congrats!

Great socks! And it always feels good to have a finish early in the year. I'm betting it will set you up for a year of fantastic finishes!

WaHoo! The sock box will be filled in no time if you keep up that pace.

Love the colors and stripes on this pair.

Great socks! Love the striping! I can't imagine knitting that many socks in one year . . . but what a great idea.

Bridget- Right on. Make sure you wear them.

LOVE them! Self-stripping sock yarn is the best!

I love your socks , the colours are gorgeous ! I joined that KAL as well , my sock drawer needs replenishing , lol .

Good for you! On to the next project.

knitting is great therapy - keep at it!

Those are so pretty! Nice work on the matching!