I hope all of you had a good weekend.  Ours was basically uneventful, but very nice, with the temperatures and humidity at a more bearable level, which helped overall.

As you know, every year I try to work on cleaning up our garden so that in the rare occurrence of a day or evening with bearable temperatures, we can actually enjoy being out there.  A couple of weeks ago, I'd started with the back area, which is not that difficult, not being covered with as many leaves, twigs, etc.  Then last weekend we were gone, so yesterday I decided to get an early start and see what I could accomplish.

I had my work cut out for me, because with all of the rain we had over the winter and recently, tons of leaves and twigs had been sitting there and in some cases, were "glued" to the cement or bricks.  Fortunately I had help - well, let's not get carried away, more like I had company in the garden, in the form of Hamlet and Jack.  Now Hamlet does fine, in that he just enjoys being where you are.  So he will just lie and provide his support.  Jack, though is a different story.  God forbid he not check out everything you do, play attack games, and take random "rests" in that piles of leaves you have created. 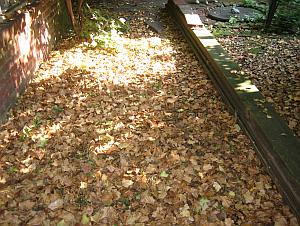 That's about 4 layers (smelly ones!) of leaves, etc. 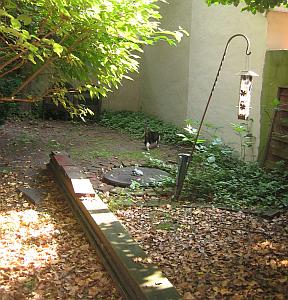 It took me about 2 hours of work, but I managed to get things to the point where the occasional sweep will keep things cleaned up.  I had 4 huge bags of leaves and such that I collected!  I just hope that now we will have enough nice weather to take advantage of this lovely outdoor space.  It's so nice to sit there and read or knit or whatever - you're outside, but not on display.

Everyone was quite worn out afterwards, which meant that the rest of the day was pretty quiet and calm.  At one point, I did look over and see Jack cuddled up with Hamlet, but I knew if I moved to take a photo, the moment would pass quickly.

And so now, we are as ready as we can be for summer.  I'm really hoping that it will be one where we can spend time in the garden more often than not.


Jack hopes so, too.  I mean, there are all kinds of bugs to get up close and personal with ... 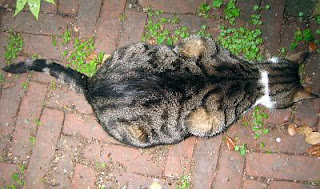 And nothing says "covered by random stuff" like a good roll around on the bricks. 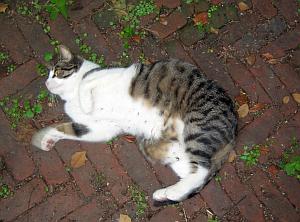 You really can't pay for this kind of help.  (Thank God!)

In other news, today I am home because I have an appt for a chest x-ray in a while, to see if the continuing saga of my cold/allergies/whatever is something more serious.  I'm hoping that whatever is or is not found, I can get some help with this crud.  I haven't had a good nights' sleep in three weeks, and my cough is killing my vocal chords (which I think The Tim finds to be a relief in all honesty).  Here's hoping that soon I can return to my usual dulcet tones ... ;-)
Posted by Bridget at 8:54 AM
Labels: garden, Jack, weekends

Rick waited too long for his seasonal allergy shot, and he ended up with The Crud, too (professionally diagnosed as Acute Bronchitis). He was kind enough, then, to give it to me. We've both been coughing/honking around here for two weeks.

I hope your garden is worth all the work and you get to use it this summer. Especially since you hired on help to get it cleaned up.

Glad you got your garden cleaned up (even with "help") and can enjoy it for at least the next couple non-humid days. Here's hoping for good news and answers from your chest x-ray.

I do love those garden assistants! Sherman is much like Hamlet - laying close by to make sure you keep working, lol. Your space looks lovely and shaded!

I hope you're feeling better soon, Bridget. I hate nagging coughs . . .
Do you have electicity in your patio area? I have a friend with a lovely, secluded patio space -- but it gets quite hot in the late afternoon. She has 2 inexpensive stand-up oscillating fans that she puts out on the patio. It really keeps things comfortable out there -- even on the hottest days. (I equate it to using propane heaters on my patio when the temperatures dip in the fall.) ANYTHING to extend pleasant patio time! XO

Looks like you have the same kind of garden help I have!

Ah yes, cat help. It's a regular thing here. If I am looking closely at something there will usually soon be a furry little head between me and my project "helping".

Hope you are feeling better soon. Just keep chanting "go away crud" ---- it may help and certainly will keep the loonies just a few steps further away.

hoping your X-ray is normal! Maybe just some post nasal drip ?
I am enjoying watching things come up in the yard and the woods.
We cut a tree down and burned it all up today. Time for them to come down and get rid of the bugs that drilled them full of holes and killed them!!!
On with flowers.

I never understood why kitties like to roll around on the sidewalk. Mine all do that. They are usually so clean.
I hope you are feeling better. Coughs are no fun. I slept with an onion under my bed the year I had swine flu. That cough would not go away no matter what I did. It took months.

praying your allergies are just allergies! Good luck with your xray. I never like doing outdoor chores probably because they flare my RA something fierce.