And A Good Time Was Had By Me

I hope you had a good weekend.  Mine started off with exhaustion - Members' Night was especially taxing this year, since the person who filled out our forms did not think to ask for chairs.  So we were not just inundated with people, but had to stand the entire time.  By the time I left, my back was killing me and my voice was nearly gone.  I woke up on Saturday with the beginning of a cold, which was annoying, but it was *my* weekend and I wasn't gonna not enjoy it.

My Going to Rhinebeck By Staying Home weekend did in fact get to start with apple cider donuts.  I walked over to the farmer's market, and managed to get the last package of four!  (I got up later than I usually do - see above - so I'm lucky that any were left ...).  The Tim and I had our apple cider donuts and some tea, and then we headed to a Michael's nearby to look for frames.  I have been wanting to get a frame for my honeybee cross-stitch, and we both wanted to find a good frame for my witchy cross-stitch I made for my niece.  I had looked at a couple of A.C. Moore stores, but the ones near us primarily sell supplies related to painting and drawing, as they are near art schools.  Fortunately, we found the perfect frames and they were even on sale, buy one, get on free.  It was nice since they were not inexpensive.  Once things are framed I'll post photos.

The rest of Saturday, I stayed put, knitting, napping, and watching some podcasts.  We also watched some things we'd recorded.  It was a stunning day, but sadly I didn't get in any walks because I was still feeling kind of icky, and The Tim took Hamlet for a couple of walks. But it was still a good day!

Yesterday it rained steadily all day, so although Hamlet and I went for a couple of walks, they were not terribly enjoyable.  I did still go over to Loop for their Fall Festival, which was lovely!  It was fairly small scale, but I talked to Laura (one of the owners), and she said it had been busy on Saturday also, and there was a good chance they would make it an annual event.  That would be great! 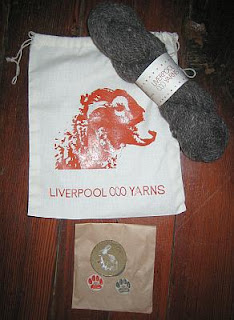 I even treated myself to a few items! I've been proud of myself this year, because other than buying a skein of sock yarn to make the socks for Brian (the person getting the kidney transplant), and two more balls of yarn to finish my Pabaig (hopefully they are making their way here as I type), I have knit completely from stash this year.  So I told myself that I could treat myself to one skein if I saw one I really wanted that was no more than $20.00.  As you can see, I did buy yarn.   This is a skein of Liverpool Yarns, a company owned by a woman who used to work at Loop, and yarn I've been hoping to try since they started up.  I bought a skein of their Bulky yarn, in the colorway Bramble.  At the moment, I think I will use it to make the Bulky Trellis hat, but since I won't be touching it until after the holiday knitting is finished, that could change.  They provided the project bag with the purchase, which is a nice touch.  Then I bought a ceramic notions dish with a bunny on it, and two ceramic pawprint buttons, just because I liked them.  So I spent a total of $25.00, which I didn't *need* to spend, but I did anyway as a treat.

We ended up with Barley-Feta casserole for dinner in the crockpot, and The Tim had made brownies on Friday night, so we each had one for dessert.

So even though I got hit with the start of a cold, and was more tired than usual, and it rained on Sunday, I enjoyed my Rhinebeck weekend!  I think I'll try it again next year - maybe we can even have a virtual Rhinebeck weekend together, who knows?

Here's hoping your weekend was enjoyable as well, and that this week will be kind to all of us.
Posted by Bridget at 7:31 AM
Labels: knitting, Rhinebeck, weekends, yarn

Your weekend sounds quite lovely. I've never managed to get to any yarn festival ever. Maybe next year!
Barley Feta Casserole sounds intriguing!

I could not find cider donuts, but I think the pumpkin donuts from our local bakery were absolutely divine (and they were still warm!) It was the perfect weekend here and I am sorry that rain intruded on your weekend!

I hope your cold is short-lived and that you will be feeling better soon!

I would love to do a virtual Rhinebeck with you next year! Mom and I always talk about going, but it's always when my Dad and brother go for their annual moose hunt, so if we left too, there'd be no one to take care of our respective herd of pets!

That yarn you got looks nice and warm. We're definitely starting to feel a chill here, and I'm trying to resist turning on the heat just yet.

The paw buttons are adorable.

Wawa has the best apple cider donuts but if you don't get there early they are sold out. I've tried twice with no luck.

Having been to Rhinebeck once, for me . . . a virtual Rhinebeck is far better than the real Rhinebeck. (Said the introvert who isn't fond of crowds and hates standing in line. . . ) XO I hope you're feeling better, and that the cold passes out of your life quickly.

Feel better! It sounds like you managed to Rhinebeck your own way!

Not a feta fan, sorry!

Aside from the cold symptoms, your weekend sounds just wonderful! Love those paw print buttons. I hope you get over the cold quickly and this week is a very pleasant week at work.

I gave you my cold. I know I did. Its a killer. Get on some whatever that works for you and fast. Mine started out with just hoarseness. Now its ridiculously on day 8 and Im still struggling with a bad one.
Please tell me your podcasts! I need some recommendations. I loved Patient Zero

So sorry about the cold. Sometimes I think you have to get sick to give yourself permission to stay at home and knit. The yarn is beautiful, you got your donuts and did not have to deal with the Rhinebeck crowds. Good for you!

No chairs!? Make a note for next year.