When You Are Your Own Best Audience

How was your weekend?  Mine was good, with a nice combination of hanging out and also getting some things accomplished.  Today is of course The Tim's birthday, and we went out to dinner last night which was fun.  We tried a new local brewpub and the food was good, but the beers were really wonderful.

Today as previously mentioned, the stuffed cabbage that he requested for his birthday dinner is in the crock pot, and the house really smells pretty darn good!  I baked his birthday cake yesterday, and then added the frosting this morning.  I am always wishing I could think of ways to decorate his cake - not anything elaborate, but just better than a plain cake.  This is mainly because when it is my birthday, he always makes a cake for me that looks pretty as well as yummy.

This year I had an idea, and spent part of the weekend trying to figure out how I could make it work.  I gave it a try this morning, and was pretty pleased with the result.  (If you have already looked at Instagram, you've seen it already - and, spoiler alert, I'll probably post the picture on Facebook later too ...)

I made an old-timey birthday cake, just like during the time of the Romans! 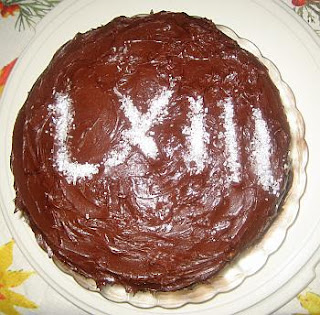 I am not just pleased that I thought to do it, and got it to work, I am ridiculously amused by it.  I mean, Roman numerals!  Frankly, I can't believe it even occurred to me in the first place.  This is the kind of thing that *might* occur to me three weeks from now, and by next year I would completely forget about it.

What a great idea for decorating the birthday cake! It sure looks delicious. If that is yellow cake under that chocolate frosting, then it's my favorite cake. Dinner sounds good and hope The Tim has a wonderful birthday/day!

How cute is that?

What a fun weekend (of course, I'd say anything was better with exceptionally good beers!)

But, I am dying at the Old-Roman-timey cake... lol Happiest of Birthdays, Tim!

That is so clever!! And it looks so much better than those ugly numbers. Once you get past 50 they all look pretty terrible to me.

HAPPY BIRTHDAY to Tim!!!! Enjoy your celebration -- the great dinner and that YUM cake. And you are so clever!!! XO

Yeah Bridget. Saw it on Instagram earlier and loved it

Hope The Tim enjoyed his cake. :-)

Yum! Happy birthday to The Tim!

I want a slice of your roman numeral cake!