In Which The Tim Gets One of His Christmas Wishes 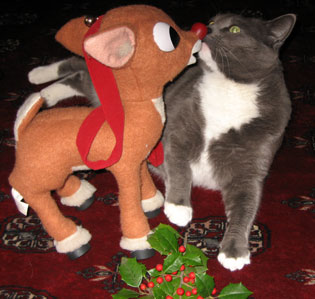 This will always be one of my most favorite Christmas photos.  Every cat we have had has had to be in a photo with Rudolph, but I was lucky enough to catch this instant when it looked as if Jetsam and Rudolph are kissing.  :-)  I miss my Jet so much, but this makes me happy even so.

Today is the December meeting of our crafting group at work.  I brought in some cookies to share, and hope that more than just myself and my co-worker show up.  It's a hit and miss thing - one month there will be three of us, and the next time, twenty people show up!  I didn't bring in a whole lot of goodies, but at least made an effort.  One of the other members also usually brings a treat (her "craft" is baking), so I'm hoping she'll be there too.  It's a nice break in the day, even if not a lot of people are able to fit it into their schedules.  Quite a few of the people who have been laid off (excuse me, "restructured") have been in the group since the beginning, so I hope they can come today, since it might be the last time we'll get to hang out ... our institutional holiday party was mysteriously cancelled, due to "scheduling issues" which all of us take to mean that the administration didn't want to have an event that might turn into a farewell party for the people previously mentioned.

Anyway, we should have a good time - I'm looking forward to it.

I apologize if I've told you this story before, but I at least find it amusing every year.  About three jobs ago, one of the women I worked with was a former pastry chef who had chucked that career for one with "regular" hours.  She was simultaneously the oddest person and one of the funniest persons I've ever worked with, and I was one of the few people she never seemed to be feuding with (and I have no idea why, but it really doesn't matter in the end).  Her husband died from melanoma, and shortly after that, she married his best friend who lived in Maine, and moved there.  On occasion, if she came back to town to visit family, we'd meet for lunch or coffee, and frankly, I was always a little puzzled why she went out of her way (clearly I'm really good at friendships ...).  But every single year, at the beginning of December, we would receive a large box from her full of various types of fancy - and extremely delicious - cookies.  For someone who seemed to truly dislike most people, it was always a compliment, but a puzzling one, since I guess I never really "got" our relationship.

Anyway, last year, we didn't get the box until the second week of December, and The Tim (who can't even make an effort to remember her name, calls her "Your Cookie Friend") was quite put out that they arrived so late.   As of the end of last week, we had not received the box yet and frankly I was surprised I hadn't heard his "concerns" about it.  This past Saturday afternoon, as he was taking a nap, our mailman delivered the Box o' Goodies.  When The Tim woke up and asked if we'd gotten any mail, I said, "Well, you'll be relieved to know that your cookies have arrived," and he responded, "Oh I'm so glad!  If they didn't get here this weekend, I was gonna ask you to ask her if she was sending them this year."  OH.MY.GOD.  I would *never* do such a thing.  But now I've decided that if I happen to finish my journey on this planet before he does, he will not be likely to ever let this woman know ...

Now also keep in mind, if someone else said something like this, he'd talk about it non-stop.

What a weirdo.
Posted by Bridget at 8:12 AM
Labels: baking, Christmastime, friends, gifts, Jetsam, knitting, The Tim

Oh, Bridget, that photo is so wonderful! Jetsam was a gorgeous cat.

It's a crying shame that Tim has so little to look forward to during The Holidays, yet this woman cannot be more regular in her cooky delivery. Hmph. Some people.

What a cute photo! Our cats never have done anything cute.

Oh, what a cute photo of Jetsam and Rudolph. Hope the meeting of your crafting group at work is a special holiday celebration. If you took those seven layer cookies, you will be as popular as your "cookie friend". That was an interesting story and she must really value your friendship judging by the annual bakery treats.

Can you imagine years and years from now when she realizes YOU must be about 110 by now and are STILL getting cookies. LOL

The Mister who used to be a mailman used to get the same baked goods from the same ladies he delivered mail to every year. He especially looked forward to a spectacular nut covered rum cake he would get. I looked forward to it too. It was amazing. You can't imagine how upset he was one year when they gave him a bottle of expensive whiskey instead. I never heard the end of it and had to try to duplicate the recipe. I failed.

Oh Rudolph and Kitty!!!! I am m missing Bear Bear this year