Well That Was a Good Weekend!

I decided on Thursday afternoon of last week that I was going to take the day off on Friday.  The week leading up to that had been bad enough, but Thursday itself was a nightmare, and I decided that it was more important to save my own mental health than it was to not use a day of leave.

I tell you, it was one of the BEST decisions I have ever made!  The Tim had to work on Friday, so it was just me and the critters.  But that's fine, because it was a perfect day.  I didn't do anything amazing or unusual, and that is part of what made it so good.  I took my time over a cup of tea and some oatmeal in the morning, took Hamlet for a nice walk, and then stopped at the market for a few items that I needed for some cookies I was planning to bake.  Then I took a little reading and knitting break, and then it was time to do some baking!

I made Seven-Layer cookies, which are one of my favorites - easy to put together, and excellent payoff!  They turned out really well, and I'm guessing they will be gone soon ... then I decided to work on the craft room/junk room/office, which was just in sad shape.  But no more!  I got it cleaned up, organized, and set out my sewing machine, which will good for two reasons: 1) it means that I will use the sewing machine because I won't have to take the time to clear off the table and then haul it out, and 2) there won't be to room pile up all the crap that tends to accumulate on said table.  It also meant that I could finally put the Christmas decorations in that room.  There aren't many, but I always refuse to put them out in there until it's cleaned up.  It was a good feeling to have accomplished so much, and still have the rest of the day to just relax.  It made a HUGE change in my whole being.

Saturday, The Tim made pizzelles, while I worked on a bit of laundry, and we mostly just hung out and enjoyed some Christmas music, Christmas shows/movies, and watched the Army/Navy football game.  He also made vegetarian shepherd's pie for dinner (not "peppered with actual shepherd on top" for those wondering ...), which was pretty amazing.

Sunday, The Tim was at work during the day, and I did some more laundry, some cleaning, and fixed homemade mac and cheese for supper.  It was a good mix of doing some things that needed to be done, and just relaxing.

Today, of course, it's back to work, but at least it's a day when it turns out that I will be the only one there, so that's a good way to ease back into the week.  Because no one wants to be in prison at Christmastime, am I right??? ;-)

Here's hoping this week will be a good one - or if not that, a quick one!  Take care. 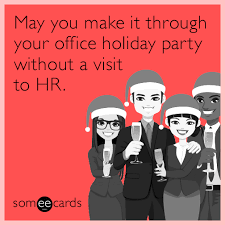 Posted by Bridget at 8:14 AM
Labels: baking, Christmastime

What a wonderful treat for yourself, Bridget! I'm so glad you took the day off on Friday. You must feel refreshed after all that good, soul-filling work. XOXO

Seven Layer Cookies are that perfect cross between candy and cooky. They're so addictive.

Days off like yours are Practice For Retirement! I'm so glad you had such a restful and pleasant break.

Smart move taking Friday off and that cartoon at the end is too, too funny!

That sounds like a pretty good weekend to me!

Now I have to go and look up seven layer cookies. I swore I wasn't going to do cookies this year but I think I am starting to cave.