Happy Tuesday all!  I'm here with an FO post of something you have heard me talk about for months.  My Pabaigh top is finally finished!!

Yes, I managed to finish it last Tuesday night, then it took me a while to weave in the ends (so many ends, due to the balls of yarn not having a lot of yardage).  I soaked it and blocked it on Friday, and it was finally dry by Sunday night. 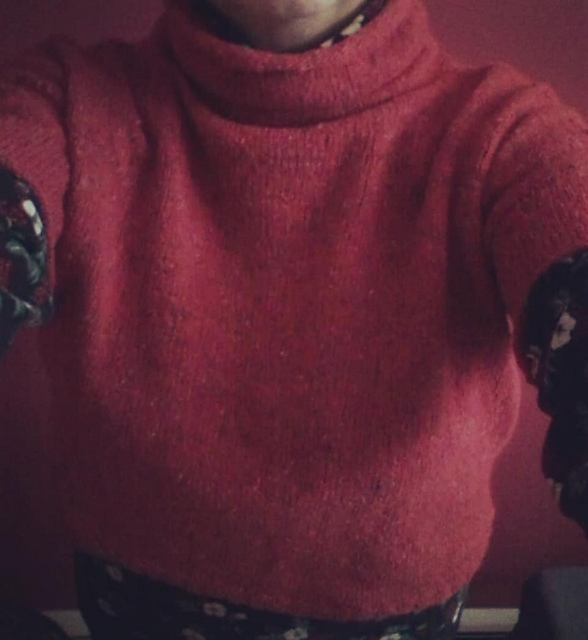 Here is a terrible selfie I took yesterday morning to give you an idea of how it looks.

Project:  Red and Tweedy
Pattern:  Pabaigh, by Kate Davies Designs
Yarn:  Milarrochy Tweed, in the colorway Cranachan
Needles:  US size 2 and 3
Modifications:  I made the body and the sleeves much longer than called for in the pattern (really, I did!), and made the funnel neck 3 inches shorter than called for in the pattern.
Notes:  This was not a difficult knit, but it took me longer than it should have for a couple of reasons - one, I ran out of yarn and then the extra yarn I ordered never arrived, so I ordered it again, and then of course it all arrived; two, I stopped to knit some Christmas gifts while waiting for the yarn to arrive, and wanted to finish them before going back to this project, since it was for me and had no real deadline.

The Milarrochy Tweed is a nice yarn, however, you have to be careful when you knit with it - when you say, get to the beginning of a round, and want to pull the yarn to make sure things tighten up, it can break.  That's largely because it is a thick-and-thin yarn, and a couple of times I didn't pay attention and tried to tighten things up when it was at a thin part.  Other than that, it's lovely yarn and I can tell you it makes a warm tee top - I wore this to work yesterday with a cotton turtleneck underneath and was plenty toasty!

I am not generally a fan of cropped sweaters - frankly I will be happy when the current trend for them is over.  But this hits me at my hip which is OK, so it's not as cropped as it could be; and since it's a layering piece, that also helps.  I think it will be especially nice to wear over a shirt with a pair of jeans, since it is definitely pretty casual.  I was determined to wear it yesterday to work though and it looked fine with a nicer pair of slacks.

Yesterday morning, I asked The Tim to take a photo for me for the blog and for my project page.  After a HUGE SIGH (he is SO put upon, WHY do I ask him to do things???  Please keep him in your prayers, people!), he took this one, where I look slightly crazed.  But if you know my history with The Tim and project photos, you know this was as good as it was gonna get.  His only comment (having been FORCED to do this) was, "It looks nice.  But the picture will be red against red, good choice."  Being that it is Christmastime and he is a bigger PITA in the mornings than the rest of the day, I just smiled and said, "Thanks for doing this."  (But I will admit I mentally slapped him.) 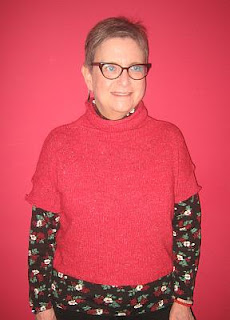 I'm glad this is finished, and I have to say it is a pretty easy pattern which would likely go quickly if you didn't have yarn issues and then get interuppted with gift knitting.

And if you knit this, PLEASE don't ask The Tim to take a photo of the finished item, he is apparently *very* busy with other things ... ;-)
Posted by Bridget at 8:03 AM
Labels: 2019-knitting, fos, sweaters, The-Tim

LOL! I think it looks great on you!

LOL about The Tim!

This turned out really nice Bridget. I've debated making it - definitely would have to make it longer (this body does not do cropped at all) and I think I would make long sleeves.

Congratulations on a great Christmassy finish!!

LOVE!! Oh.my.gosh! IT is adorable on you! Perfect length, perfect sleeves, perfect funnel!

beautiful! if you wear it for our coffee date this weekend, i will HAPPILY take photos for you. outside and in natural light!

Please extend my Gratitude along with my Sympathies to Tim. Bless his heart.

That sweater looks terrific on you. You look very stylish and Audrey Hepburn-esque. Nicely done.

In spite of THE TIM'S dislike of photography, the photo looks great and you look great in it.

Congrats on a beautiful finish.

It looks really great, Bridget! I bet you're going to love having that layering piece in your wardrobe -- for work or for just hanging around at home. I actually think the cropped style looks better on ALL bodies than people think it's going to. (I mean . . .it's not like we're talking bare-midriff cropped here . . . which is another thing altogether. . .) The cropped, layered look is flattering on all bodies, really. (Plus - bonus - quicker to knit!) Your sweater looks divine. XO

Great sweater but you had me in stitches talking about the photo shoot. Men are that way, aren't they? I can stand and hold something for The Mister for hours while he is working away at something but if I ask for a quick favor it's like I am asking for the moon.
Congrats again. Finishing a sweater-especially one that fits is a huge deal!!!

After I stopped laughing about your photo session, I went back thru the photos. Your sweater is just beautiful and even red on red shows its beauty. Layering makes cropped tops so very attractive. Hope you wear your sweater frequently this winter.

It looks fabulous on you! Well worth all that trouble!

Philly Tim needs to sort out his priorities --- to quote ron Weasley.

I like cropped sweaters, too. Very cute, and very handy if you don't need full woolly coverage.

What a great sweater! It looks great on you! Give my condolences to The Tim on all the wasted time it took for the photo.

beautiful finish!! I do love the color too :)