I am feeling quite pleased with myself at the moment, because I have completed a project for Christmas gifts that means one entire family is already marked off my list! 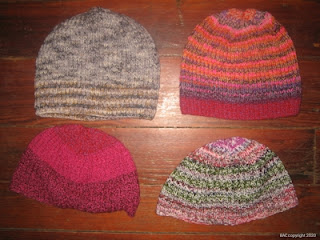 Yarn:  See each individual project. Everything was leftovers from previous projects.  Except when I used yarn that remained from my Crazytown Cowl (which was DK yarn to being with), I used two strands together to make the DK weight needed for the pattern. 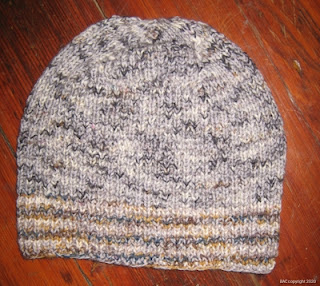 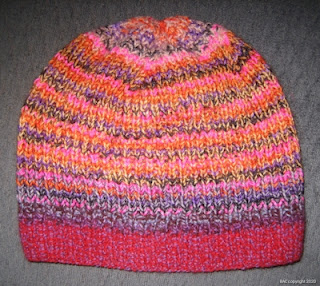 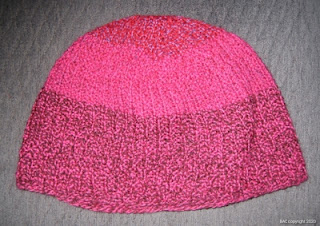 P Hat - leftover yarn from my Shift Cowl (aka Crazytown Cowl) by Andrea Mowry.  Adapted for a kid's head. Cast on 96 stitches, and knit for 5.5 inches before starting decreases.  Started: August 25 ... Finished: August 29 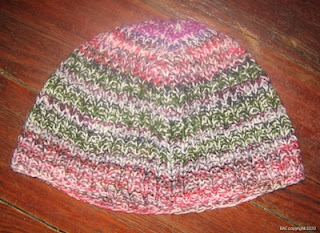 O Hat - used Ancient Art Fibres sock in Grey Tabby, along with Lorna's Laces Shepherd Sock in Peppermint Mocha; Nomadic Yarns Twisty Sock in the McGonigle and the Dumbledore colorways.  Cast on 92 stitches, and knit for 5 inches before starting decreases.  Started:  September 1 ... Finished:  September 12.
I love how each hat turned out - different but with some similarities.  After making a hat for The Tim last year using this pattern, I thought that it would be very adaptable to size, since it is a pretty versatile pattern that starts out stretchy when you follow the pattern exactly.  I adjusted sizes mainly so that none of the hats would be too slouchy, because when I tried on the one I made for The Tim, it fit me just fine, but there was a lot of extra material to be either slouchy or for a large folded over brim.  In any case, I highly recommend this pattern.  It is very clearly written, very straightforward, and knits up quickly, since the only point where you have to pay close attention is when you get to the decreases.
So now I have some Christmas knitting completed - early enough to give me some time to decide what else I should attempt for others. 😊
******
I've been able to do a lot of knitting during the pandemic, and I have to say that not only has it given me something to keep my mind and hands busy, but it has also helped me maintain a certain degree of normalcy.  True, there have been plenty of times when the world has been too crazy and too upsetting to even consider doing anything at all that required any brain power or concentration.  But when I was able to rein in the panic, being able to read or knit or stitch meant that I wasn't constantly in a state of major anxiety.
Unfortunately, it's not looking like things will settle down anytime soon here, at least not in the U.S., so I hope I can continue to manage my feelings with things that are only only enjoyable, but that take my thoughts in another direction and allow an escape, no matter how brief.
I have never been more grateful to have a decent sized stash, let me tell you!
******
I hope all of you have a good weekend.  It's the last weekend of summer here in the Northern Hemisphere, and in Philadelphia, there has definitely been some hints of autumn in the air.  Whereas some people find that depressing, since it takes us into the seasons of colder weather, and fewer hours of daylight, I look forward to the cozy.
I'm especially grateful my biggest concern right now is locating some warmer things to wear; I don't have to deal with flooding from hurricanes or evacuating due to wildfires, or face the daunting fact of starting over with nothing.
Take care, everyone.
Posted by Bridget at 7:00 AM
Labels: 2020-knitting, christmas, family, fos, hats, knitted-gifts, stash-knits

Oh my I am extremely impressed! I wish I could type that sentence on my blog..

Nice work! Four hats done by mid-September for Christmas gifts is a heck of a start.

Here in NEO, we've definitely transitioned to autumn. Temps have been peaking in the sixties, with nights in the forties and fifties. I'm happy not to be sweating and running the AC, but like you, feeling blessed that I'm not battling the fires and floods of our neighbors in other places.

Nice hats. I have a feeling we are going to have a cold winter. Those hats sure will be appreciated!

I can't imagine trying to start over with all that is going on. Getting anything done is always a trial and even MORESO with all the restrictions.

The hats are fabulous.
Knitting and sewing have definitely kept me sane. I'm not a huge worrier, but the pandemic has meant Dave is home 24/7. One of the things I love about our relationship is that we were always good at being apart. We missed each other, of course, but I also looked forwards to the nights he was working and I had time to myself. Now he's here ALL.THE.TIME. Being able to escape to my studio for a few hours, or sittin in the garden knitting, has probably kept me from murdering him.

I've had to cocoon more than once of late, to keep my sanity. Thank goodness, as you say, for books and yarn.

I sincerely admire people who can crank out hats. I love to wear them but hate to make them. Well done!!!

Oh how satisfied you must feel to be ahead of schedule. When it comes to gifts I am very willing but often bereft of ideas. Hats are a great option.

While you are digging out warmer clothes, I took the opportunity yesterday to wear my new boots before it got too warm here down under.