I had another post in my head to share today, but I'm going to put that off until another time.  Because today on my way to work, I saw something that not only amused me, but also made me think of a good thing for Three on Thursday.

As you may have guessed by the post's title, I am thinking of three particular pieces of art that have amused me greatly.  I'm not making any commentary as to what is or is not actual "art," because I have no real ability to speak to that.  But I do know the kinds of things that amuse me.

1. What started it all: On my way to work I pass a store that sells framed art and that will also do framing.  They always have a variety of things in the window.  Today there was a large black and white photograph that got my whole brain going on this topic. It showed Nelson Mandela sitting in chair, smiling, with his hands held out as if he was speaking to a crowd of people.  To his right on a small couch, there was Martin Luther King, Jr., Muhammad Ali (back when he was known as Cassius Clay), Malcolm X, and Barack Obama - all leaning forward with serious expressions, as if they are listening to every word.  Now, let me say that I get this - these are all men who all made a huge difference in the world, particularly in their respective areas, and they are all icons.  But I am amused these days by photos that you know are Photoshopped, but look completely convincing.

And that reminded me of two other art pieces that have always made me laugh when I remember them.

2.  A friend of mine in high school brought in a picture drawn by her younger sister who was in first grade.  It was depicting the Holy Family's Flight to Egypt.  It showed Mary, Joseph, and baby Jesus in a plane!  Apparently the friend's mother asked why they were in a plane, and the little girl said it was supposed to be a flight.  OK.  Then they asked who was flying the plane, and she said, 'Pontius Pilot' (of course meaning "Pilate"), and every year around Easter I think to myself what would have happened if in fact they had all left Egypt on a plane in the beginning of the whole story ...

3.  And now one of my all-time favorites.  When we lived in DC, one of the places I worked was in the library at George Washington University.  Our department had one wall that was all windows, and looked out on a plaza where people came up from the Metro.  There were all kinds of street vendors located there, but my favorite was the guy who sold paintings on velvet.  Of course, he had the usual suspects: Elvis, Jesus, and The Beatles, as well as some scenic views.  But for me the best one will always be a triptych he had in place of honor and clearly felt was his masterpiece.  It depicted JFK on one end, Martin Luther King, Jr. on the other end - and then in the middle: 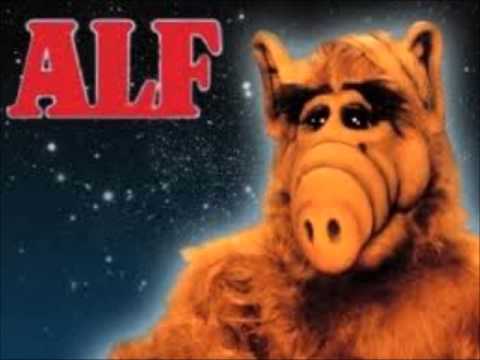 For real, honest!
Every time I remember this, I laugh really hard, remembering not just how all of us used to talk about it, but how much fun it was to watch people come up out of the Metro, walk over to take a look and then do a double-take!  To quote The Tim when I told him about it, "I don't know why you think it's so hilarious. I know I always think of those three together."
😂
Posted by Bridget at 8:09 AM
Labels: three-on-thursday

Thanks for a laugh this morning. I can give the first "photo" a bit of a pass since it is communicating a message of sorts (no pun intended). I'm sure, however, that lots of people are amazed at That Moment In Time that all of those incredible people were together at once. ;)

The flight out of Egypt helmed by Pontius Pilot/Pilate is tremendous. Better than any Art Linkletter show could have produced.

The trio including Alf? Nothing less than visionary.

I needed that laugh!

The airplane story is FUNNY.

I could see the Pontius Pilate answer coming from a mile away (we have a dog named Pilot and often make a similar comment during easter). All these made me smile, which I desperately need today.

They need to bring back ALF!

Oh, those are GOOD, Bridget! :-)
(One of my favorites . . . was a "painting" I saw every year at Bronner's Christmas Wonderland (my mom and I used to go every fall). It depicted Jesus blessing the UN building. Jesus was as tall as the building, and standing right next to it. I understood the sentiment, surely. But . . . it would have looked perfect next to, oh, say . . . Alf.)

When we lived in California the annual Christmas parade in our town went by about a block from us, so we went every year. The best year of all was the year the local Catholic school had a float that was the end of the parade. It was lovely: Joseph and Mary, baby Jesus in the manger, and Santa Clause.