First of all, thank you for the comments about my office decorations.  One funny thing is that technically, we are not supposed to have decorations that could in any way offend anyone.  But my office at work is so out of the way, that you only arrive there if you mean to get there.  And over the years, I've noticed that other very behind-the-scenes work spaces are the same with how they celebrate various holidays.  If I go down, I'm taking them with me! 😊

So, you know how I am always talking about holidays having "rules," especially Christmas.  Well, even if you refuse to admit it, I'm sure you have your own set of rules.  According to The Tim, mine are "vast" but I notice that he goes along with all of them so who's the problem there, bud, HUH???

I have one friend who, every year during Christmastime sends me some version of this, because she knows it infuriates me, which amuses the heck out of her: 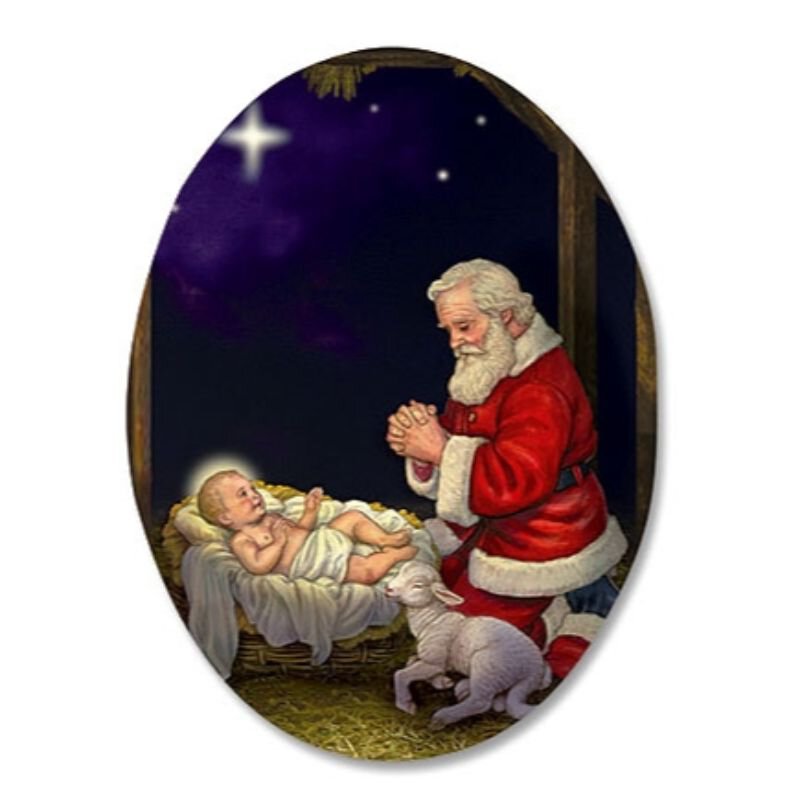 NO. NO. NO. NO. to infinity and beyond.
Now.  I know that there are a bazillion versions of nativity images, sets, live action shows, etc.  And even more interpretations of said scene. That's fine with me, for the most part.  I like some, and ignore others.  But this one is something that I simply cannot and will not tolerate - for the people in the back:
SANTA HAS NO PLACE AT THE NATIVITY/BIRTH OF JESUS
Keep in mind that the aforementioned friend does not care about this one way or another, she just asked me once why I marked a Christmas card from her "Return to Sender" when it had a sticker seal on it of this variety.  When I told her that Santa at the Nativity scene is something that I find so annoying and appalling that I refuse to acknowledge it, I inadvertently started this tradition.  Sigh.
Yes, Santa is also known as St. Nicholas.  Yes, Santa shows up at Christmastime, and in a lot of ways for a lot of people, he is the best part of it.
Then there is Jesus.  Whether or not you are a believer, Christmas is the celebration of His birth. Which once again, if you believe, happened many many many many years before anyone even thought of Santa.  They are two separate aspects of Christmas, and though I'm sure that some of you have no issue with this, or even think it's lovely, in my world with my rules this is just a big NO.
One time, The Tim pointed out to me that there is a well-known family story of how, when I was a little kid, I used to take all the people out of the manger scene, and put them on the sidelines while all of the animals went inside.  I then pointed out to him that according to all stories of this event, animals were present, and it was actually *their* living space to start.  He's never brought it up since ...
So, to review, according to my rules:
Animals at the Nativity = Yes.
Santa at the Nativity = DON'T EVEN THINK ABOUT IT.
Thank you for coming to my Christmastime TED talk.**
**P.S.  And even though I'm writing this for the humorous aspect, it's still true.  😉
Posted by Bridget at 10:05 AM
Labels: Christmastime, holiday-rules, Nativity, Santa-Claus

Next you'll be telling us there weren't any dinosaurs in the manger either.

You had me laughing so hard! I've only known Santa at Christmas since my family never did the baby Jesus thing-or any Jesus thing actually. My dad was raised in Catholic boys homes so that put an end to any talk about religion in our house. He wouldn't hear of it and you wouldn't want to hear what he would say about any of it.

Could not agree more.

The Santa factor at Christmas has been way over hyped in the last few years. Kind of how ADULTS have taken over Halloween from a kid's holiday.

I will admit ...........we only ever had Santa Christmas. If my parents were believers you never would have known it by our celebrations. Santa was at Christmas and Easter Bunny was at Easter. I was pretty old when I realized that Christmas was actually a celebration of Christ's birth. I mean "child" old, not like .............last year or anything.

I have no problem with Jesus and the wise men (guys as some kids will say) and I also have no problem with a Santa putting present under a tree and sleigh on the roof top. One of my brothers however was a strict no Santa in any form ever. Okay, but I didn't know it until I sent his family an extremely cute Christmas card of a wintery house with a chimney and a 'pop-up' Santa at the chimney. My brother when he saw me at Christmas thanked me for the card but took me aside and told me that they 'removed the Santa' from the card as that was not something they did/believed in for Christmas. Ohhh Kayyy. We still love each other and I just send more 'generic' cards.

I agree with you there :) Holly the cat likes to knock off the animals at the manger scene so maybe she thinks differently, lol!