Hello - I have to tell you that for a change, I am in a relatively good mood on this Monday.  It is the week leading up to Christmas Day, and we had a good and productive weekend.  And then when I got to work today, the woman who is the early morning security guard was telling me that her daughter was finally improving.  The daughter had surgery about a month ago - the kind that shrinks the stomach, you know something with "gastro" in it - because she was horribly overweight.  And she was not recovering well at all.  But apparently over the weekend, things started to look up, and she was improved every single day.  That made me so happy, because though I don't know the daughter, our security guard is such a great lady, and I had been feeling so bad on her behalf, because they were trying everything.  Good news like that is especially welcome on a Monday, right??
As I said, we had a good weekend, combining getting some things accomplished and then also just relaxing.  We finished all of our decorating, I finished all of the pre-Christmas Day cleaning, and some more baking was done.  The Tim made some pizzelles, and also some *incredible* cookies that were new to both of us.  I forget where he got the recipe, and the exact name, but they are chocolate chunks, cherries, and ginger and OMG are they amazing!  So rich, one is plenty (and that's saying a lot from me!).
Of course, all of these activities required snoopervision from Hamlet and from the Koodle, so they took twice as long to accomplish.  Pip however, was apparently feeling quite taxed, and was unable to assist us because he was taking some much-needed rest. 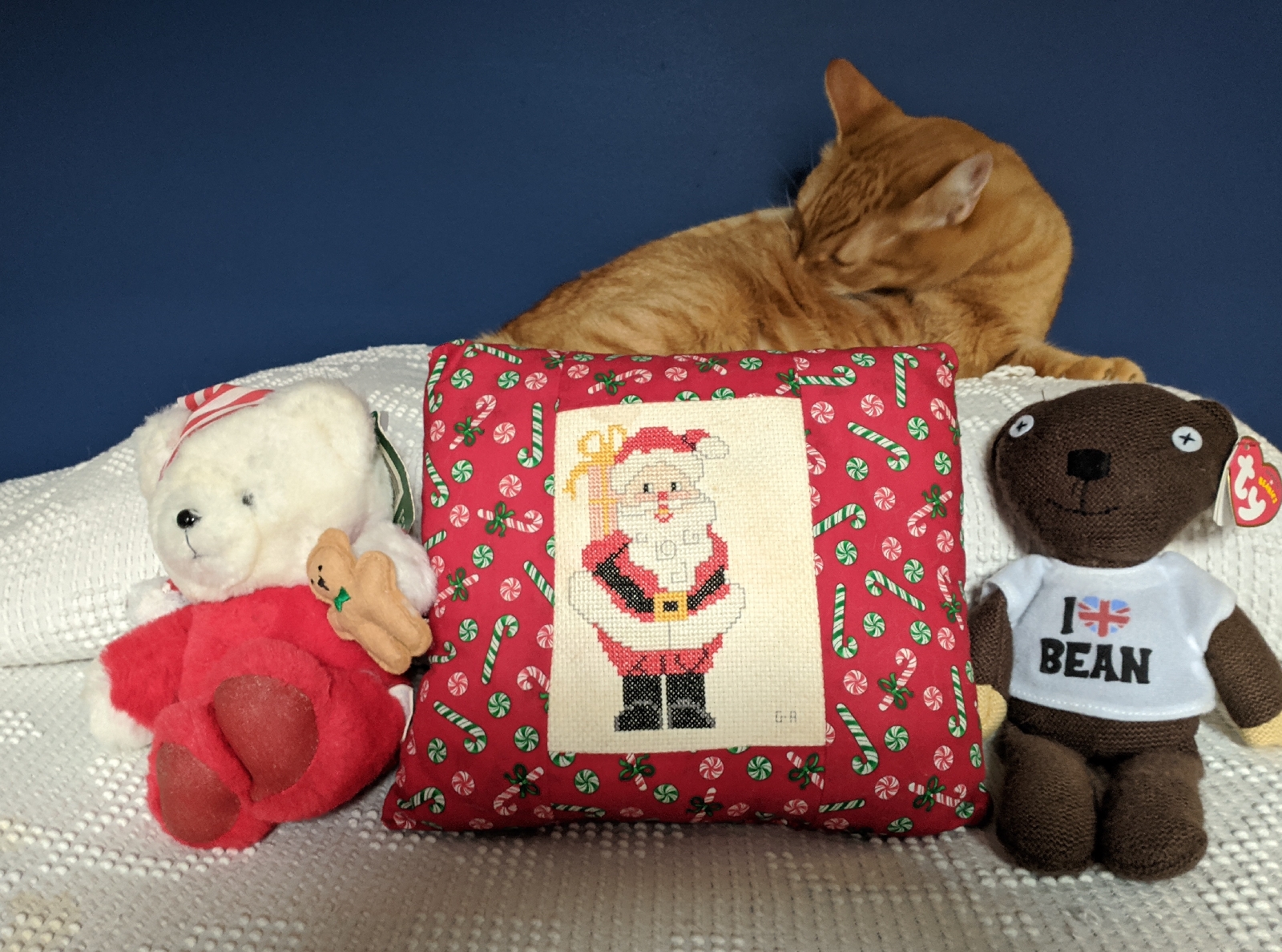 You'll be relieved to hear that he is fine, and was also quite comfortable with this setup.
This week will be a sad one at work for me.  Our archivist's last day of work here is on Wednesday.  She is the one person in my dept that is bearable, and who knits as well.  She got a new job which will begin in January.  Which is great for her, because our terrible boss treats her only slightly better than he treats me.  So our dept of four people will now be only two, as the other person left in mid-November.  And even worse, the one person besides me who is left is the person who is the absolute worst.  Plus, she is the terrible boss' favorite in the world, and the two of them together is just more than anyone should have to bear.  Fortunately, she took this week as vacation, and since I'm taking next week off, I won't have to deal with her until January.  I'm not looking forward to it at all, but at least she isn't around right now.  I'll miss Jennifer, but she found a really wonderful sounding job that will even pay her considerably more, so I do hope for her that it works out.
That's all for the moment.  I hope your week goes well, and that if you are also counting down to Christmas Day, that it is enjoyable for you.
Posted by Bridget at 8:19 AM
Labels: Christmas-cookies, Christmas-decorations, Christmastime, Pip, weekends, work

Poor Pip. Why must you work him so viciously?

Perhaps Jennifer could put in a good word for you at her new workplace if a position there opens up. How nice that would be!

I wish we lived closer to one another so I could benefit from all of your Christmas baking. It sounds wonderful.

Sorry your friend is leaving work; that will make it tough to go back in January. Maybe you should look for a new job also? My daughter is doing that now too and so we have fingers crossed that she will find a new position in the new year. Here's hoping!!

The cherry/ginger cookies sound amazing. I'm not sure I could stop at one.

So sorry about your work situation… we have a new über boss at work who is causing much unhappiness, but at least my direct co-workers are nice. Not that we don’t often have strong differences of opinion, but we do get along.

Recipe link for cookies, please? They sound fabulous, I love cherries and ginger.

I'm sorry you're losing a good work friends, that's always hard. Enjoy the lead up! I love this time of the year, the days right before Christmas! Last night we sat around our fire singing Christmas carols, for no good reason at all except it was cozy. We've never just sang things before!

Sorry to hear about your work situation. Your turn is coming in 2022... I feel it!

A husband that makes cookies? Yes, please.
I want this week to slow down. Christmas really crept up on me this year. If I'm going to enjoy any of it I better start soon-the problem is The Mister and I can't seem to get out of construction mode. It's a lifestyle now...lol.

I agree with Nance and Dee! Hoping Jennifer can put in a good word for you and you can escape where you currently are. and the cherry ginger cookies soiund amazing...recipe link PLEASE!!!

I'm sorry that your best colleague is leaving. Being in a department where favorites are also played, I truly sympathize. Maybe the evils will have to move in the new year and their replacements will be amazing.