Seriously These Past Couple of Days ...

Oh dear, you may have noticed I was MIA yesterday, which was unplanned, but also no big deal.  This week is clearly trying to get me, but HA! I am prevailing.  At least for now ...
Tuesday I wasn't at work, but I was at two medical appts - one that took all morning, after which I had 1 1/2 hours reprieve, before another appt that took all afternoon!  Neither were anything serious, it was mostly waiting while the respective physicians were behind on their schedules.  But nonetheless, I was really tired on Tuesday evening - waiting with no indication of how long it will last stresses me and wears me out.
The good thing is that on Tuesday evening, I finished the first of the pair of Christmas socks I'm knitting for myself: 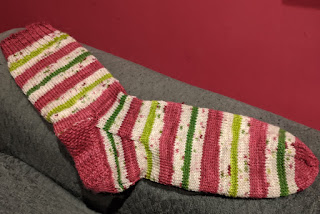 I truly lurve this - both the sock and the knitting part!  It's Lollipop Yarns in the Christmas Waltz colorway.  Since I knew there was a good chance I'd want to knit yesterday, I immediately started on sock #2, so I could at least get cast on and the cuff ribbing underway.
Yesterday, not to be outdone by Tuesday, more medical stuff - but this time, it was for The Tim.  He had his colonoscopy scheduled, and I was the "support person" designated to accompany/wait for him.  Things looked promising, as they took him back to get started right on time.  But then it actually turned out to be 3 hours until he was finished!  He said there was a code called at one point, and then who knows what else was/was not happening.  The good thing is that they have a computer board set up in the waiting room and you can see exactly what part of the whole thing your person is in - for example, it shows the first three letters of the last name, first initial, and then, "In Prep, "Procedure in progress," and "In Recovery."  So it's not like I thought the procedure was taking that long.
I got started where I'd left off the night before: 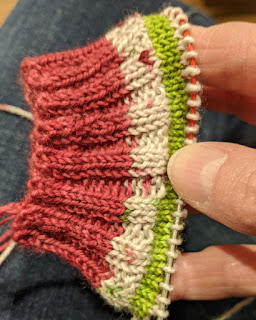 And, by the time he was finally finished and we could go home, I had made it to the place where I will start the heel flap!  So although it all took a long time, I did get lots of knitting done!
However, by last night, I was *really* tired - I mean, I'd still been catching up with the day before!  Today I have to be at work until 6:30, because I'm part of a program presentation, so it's even a better thing than usual that tomorrow is Friday, you know???
Yesterday, when we got home, this was happening.  All's well that ends well.  😊💖 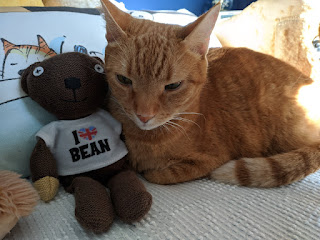 Oh, I do like that yarn. The speckly part is so nice between the solid stripes.

I detest waiting so much. Even when I have something to do, it drives me batty. Patience is not my virtue, and I have been working on this my entire life.

Pip is a snuggler. I think it's an inherent trait of marmies.

It's those kinds of days that make me glad I'm a knitter!

I had a dental check up on Wednesday that took all day. I've never waited so long. They put me in a room as soon as I got there and I sat there for what seemed like forever. Then the cleaning took all of 10 minutes and then I sat and waited another 45 minutes for the dentist to come in and tell me everything is fine. I told The Mister that the next time I go I'm packing a bag of things to do. I was bored out of my mind. I could have knit a sock.