Yesterday was a looooong day.  I left the house at 6:45 a.m. and returned home at 7:15 p.m.  I really thought I'd never get home, you know?  Anyway, when I finally walked in the door, The Tim met me, and he didn't say "Hi," "Good to see you," or even "Go to hell" - nope the first words he said to me - in a reverential tone - were "The Box arrived today."
Magic Christmastime words:  The Box arrived today."
The Box: 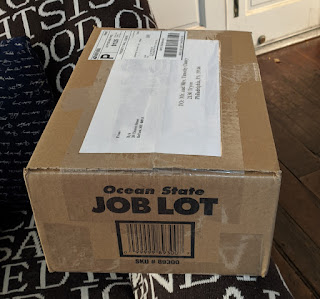 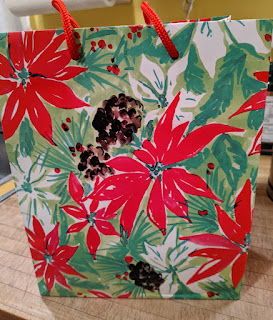 And, the piece de resistance, what is inside the bag inside The Box: 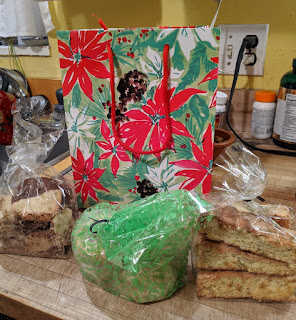 You may be thinking that yes, it looks like we got some cookies in the mail, and you may also know that we bake cookies ourselves, so what is so special about The Box?
Well, about 25 years ago, I worked with a woman who I can truly say was one of the oddest people I've met in my entire life.  She is just ... odd.  Nice enough, but not a warm personality, extremely direct, not overly social, and could never be accused of being friendly overall.  But she is smart, and pretty funny in a sardonic way, and she loves cats.  At the time we worked together, it was (surprise) in a library, but that was her second career.  She had originally trained and worked as a professional pastry chef.  After years of doing that, she decided she was burnt out and switched to working in a library.
Through no real understanding of mine, she decided I was an OK person, and would talk and joke with me.  Then she started bringing in her baking experiments for me to try ("by the time I'm finished, I don't want to try it, and ____ [insert husband's name] doesn't really care, so you are my taste tester").  As I'm sure you can imagine, I was more than happy to try her concoctions.
After a couple of years working together, her husband died (which is sad anyway, but they were both a lot younger than me, so that just seemed extra sad).  She worked about another year longer, and then remarried her late husband's best friend, and they moved to Maine.  His mother still lived in Philadelphia, so they would come to visit here about two or three times a year.  Each time, this woman would e-mail, and we would meet to have coffee or something.  Which seemed weird to me, because again, I never really felt like we were actual friends, more like agreeable co-workers.  But, it was always nice to see her, and catch up and hear her stories about her new life in Maine.
But the really crazy thing is that beginning the year she moved to Maine, and every single year since, The Box arrives at the beginning of December.  It always contains three different kinds of holiday cookies, some old favorites but always a new recipe, and a chatty note from her, catching us up on things.  Now I know from working with her all those years, that she sent Christmas packages to her mother, her sister, her niece and nephew, and of course exchanged gifts with her husband.  Apparently we were added to her list.  Again, through no actual effort on my part or even awareness that we were so ... close?
I have to say that even though it surprises and puzzles me, I do enjoy it, and hearing her update every year, and realizing that I must have actually been someone she decided she likes.
The Tim, however, has decided that his life is given new meaning every year when The Box arrives.  One year, it got to be late in the month, and we hadn't received it.  He wanted me to contact her and ask if she was sending on that year!  I nearly fainted when he suggested that - I know he was [sort of] kidding, but still ...  (Just so you know, it did get to us - she had just gotten behind on her baking!)
And so now you know the story of The Box.  This woman's mother-in-law who lived in Philadelphia died a couple of years ago, so they don't really come to town anymore.  Nonetheless, every year, I get her update in a long, newsy letter tucked inside The Box.
And The Tim finds his Christmas miracle as well.
Posted by Bridget at 8:30 AM
Labels: baking, Christmas-gifts, Christmastime, friends, The-Tim

You ARE friends! She feels a connection to you and shares her baking with you each year and that is what friends do. What a nice treat to look forward to each year.

How wonderful! And I can only assume the goodies are delicious.

I love this! I used to get a "box" from a pen pal in France every year and it made my Christmas. Every thing from France was so wonderful. I had a very hard time coming up with anything as nice. We decided not to exchange anymore two years ago and Christmas has not been the same since.

That is such a wonderful story! I do think you are friends with shared history and the annual "box".

You know, Bridget, you ARE kind of likeable!!!

What a lovely tradition!

What a wonderful, magical, Christmas-y THING! Sometimes we don't even realize the impact we make on someone else's life. That must be the case with you and this former co-worker, who is definitely now a friend. Such a great story, Bridget. XO

I love this story!