A Stitchy Saturday Leads To a Tiny Needle Tuesday

Before anything else, I know that today is the first day of summer, and for those who love summer, Happy First Day of Summer!  For the rest of us, let's hope for the best.  I have to say that the final long weekend of spring was absolute perfection here in Philadelphia - cool nights, sunny warm but not hot days, nice breezes - what you actually think of (or at least what I think of) when you think "spring."
We had a long weekend for the observance of Juneteenth, so this is a four-work week for me, which is 100% fine.  I had a combination weekend of accomplishing things, and also relaxing.  I cleaned up some in the garden, which made me really happy.  There was one part that was left to clean up after I ran out of energy a week or so ago.  Not only did I get to it yesterday, but it took less time than expected, which was a bonus.  Most of the rest of the things I managed to do are things that need to be done, but don't necessarily show up to anyone but myself, if you know what I mean.  But that's OK.
On Saturday, I got to spend some time with my stitching project, which had languished for weeks after a decent start.  You may remember what I had before, having finished with one of the colors: 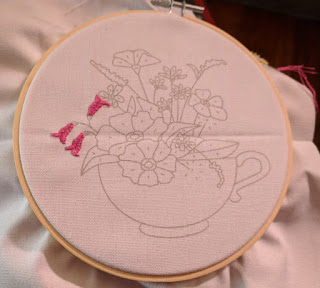 So I thought I'd see if I could get another color's worth of  stitching completed, and though in the photo it looks like the same colors, there is a barely there difference.  But I did manage to get everything done in another of the colors, and I'm pleased with how it looks: 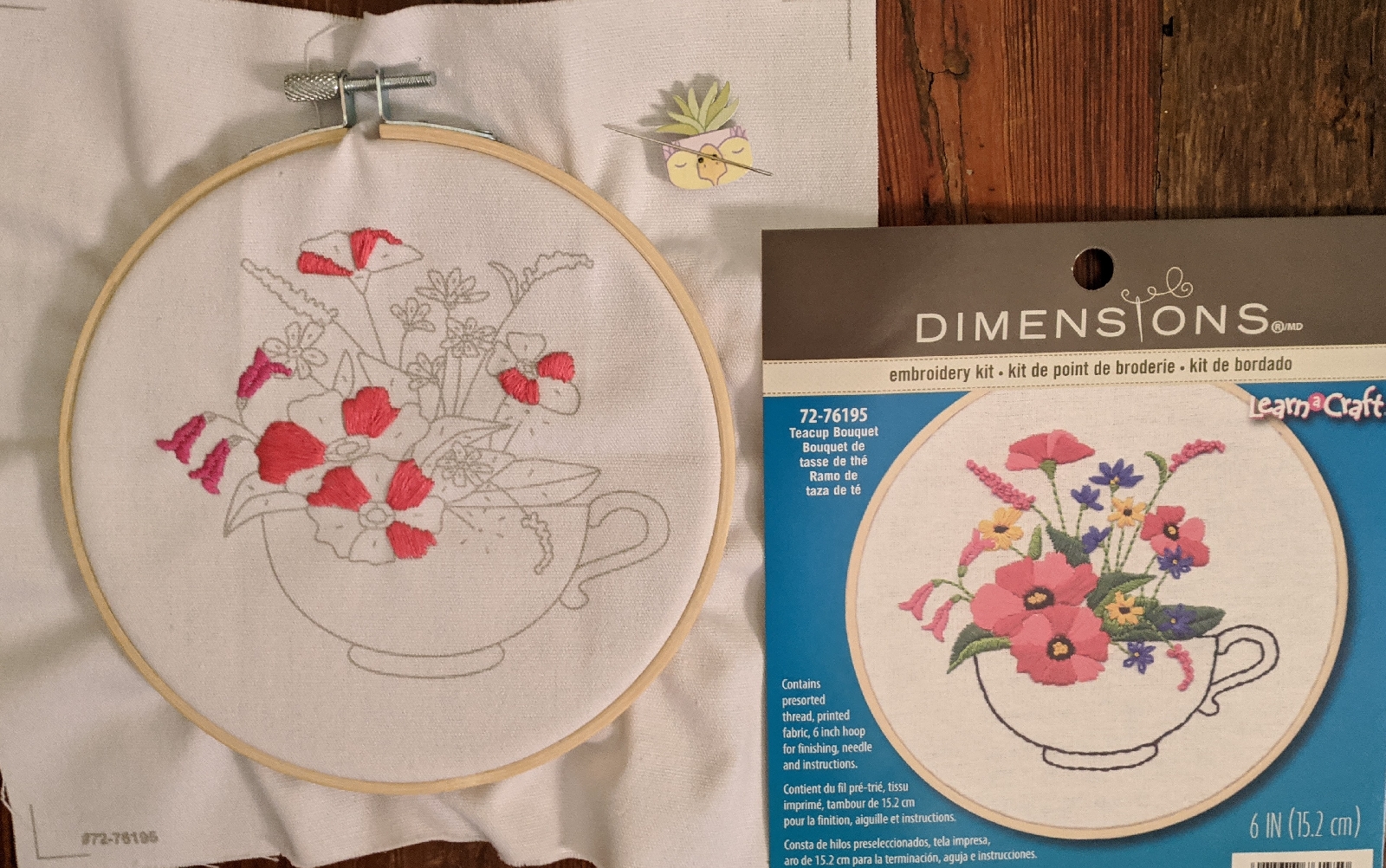 (Picture of completed project for reference)
Keep in mind that I haven't really done any embroidery since I was probably 8 years old or so.  I did take a workshop a couple of years ago, to review the different stitches, etc., but I'm still at the beginner level.  I'm really enjoying this project, and it also allows me to participate in Tiny Needle Tuesday!  Every week when I would see others' projects, I'd be itching to get back to this one, but at least at this point, I still need to be in a place to concentrate on what I'm doing, with few interruptions.  So it doens't get worked on as often as say, a knitting project.
Other than that, I also started two different pairs of socks - one for me, and one that will be a replacement pair requested by my niece's husband, which makes my heart so very happy!  Right now, I have two cuffs knit, and about 3 rounds on one of them.  It was what my brain was able to handle and I was quite surprised to cast on and be able to start knitting on both pairs right away - usually I have to cast on, rip out, and cast on again, at least 4 or 5 times.  But apparently I was on a roll this past weekend.  😊
Other than that, the only things going on this week are a dr appt for me on Wednesday, and The Tim working every day this week.  Which I'm certain will confuse all of us.  This morning when he got up and was taking a shower, I kept wondering why, since Tuesday is generally one of his days off.  But then he reminded me that this week he is working M-F, so hopefully I'll remember.  The cats were very suspicious, particularly Alfie, who just thinks The Tim is the best!  So between having Monday off, and The Tim working today when he usually isn't, I keep having to remind myself of what day it is ...
I hope you have a good week and that it's at least a little less confusing than ours!
Posted by Bridget at 8:11 AM
Labels: Tiny-Needle-Tuesday

We had similar weather this weekend. Now it's just hot and humid and GROSS.

Your beginner embroidery skills are pretty darn impressive to me. I can only make x's, which is why I stick to cross stitch! Lol

I love it! Embroidery is so challenging but it looks so good when you get it right.

Love the embroidery!
We made a point of treating yesterday like a 'normal' Monday except Tim didn't have to work, so we're in a bit better place than we normally are after a 3 day weekend!

Now that I am retired, I have to constantly think what day it is. SO CONFUSING!!!

It doesn't take much for me to get mixed up about which day it is . . . so good luck getting through your 4-day work week. (I'm sure you won't be mixed up anymore when it's Friday!) I love your embroidery project, and I look forward to seeing it emerge in all its colorful and textural wonderfulness. XO

Your embroidery looks lovely. That project is such a good one.

We had the same weather--gorgeous and coolish, with sun and breezes. Now we're in high heat and humidity, and I'm already over it. Completely.

So glad to hear that Alfie is in love with Tim and feels so anchored in your home. I knew it would take no time at all.

I like that embroidery - it will be so pretty! I think I may have to check out my local stores to find an embroidery kit to do. I am always looking for ways to fill my time and that looks fun! Thanks!