Today is another Unraveled Wednesday, so it's time to show you what is going on with me as far as reading and knitting.  The "babying" part of this is my effort to not do too much knitting at all until my arthritis flareup has disappeared.  It's much better than it was, and if I can just knit a bit and then put it down for a while, it should be fine.   I just have to keep reminding myself so I don't get carried away!

Over the weekend, I started this book:

So far, I'm enjoying it.  There have been a couple of times when it's made me laugh out loud, and these days especially, that feels good.  I hope it will continue to be a good read - it aggravates me how so many books are good at the start and then suddenly it seems like the editor feel asleep.

During the past year or so, I've been usually only working on two knitting projects at a time, and that has been a good practice.  But currently I have three things going: my Scattered Wishes Shawl, my Social Security Number Socks, and these: 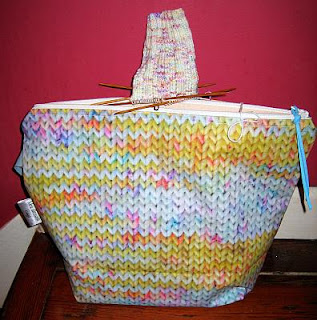 The Scattered Wishes Shawl does not look much different than the last time I showed it.  I got to the lace border, and was going along *very* slowly when I realized I'd made a huge mistake.  So I ripped back the 6 rows and will be starting over.  Not a big deal, but since it requires concentration, I just haven't picked it up in the past week after ripping out.  The lace also requires some needle maneuvers that I think are probably better done when my hand is in better physical condition, so it may be another week or so until I try again.

I finished the first one of my Social Security Number Socks, and have just finished knitting the gusset of the second one.  I switched around a couple of the colors, so they will match but not match once finished.  Which pleases me.

You saw the yarn above in last week's post, wound into a skein ready to knit.  This is the very beginning of the first sock of a pair.  I'm using the Solar pattern, which is easily memorized, and so far seems to be a happy match for this yarn.  Incidentally, the project bag is one of Mrs. Brown's Bags, but I got it as part of a combo from Yarn Ink - it was the July Bag + Yarn Club choice (and we nowhere near as expensive as the June choice on the website!).  I've always like the bags, and had hoped to get one, but the shipping was just too much for me.  This offer of the yarn and bag together was a better deal, and I'm glad I went for it.  The bag pattern is made from a print of this yarn knit up into a large stockinette swatch - how cool is that?

I'm making slow progress on each project, and haven't yet started the swatch I mentioned doing in the other yarn shown in last week's post.  Mainly because I hate making swatches for knitting in the round, but I'll get to it soon because I really do want to knit the item.

On an unrelated note, we had a Customer Service workshop at work yesterday, and here is an actual exchange that happened at the beginning:

SHE ACTUALLY SAID THAT.

Holy Moly ...... that instructor needs a little diversity workshop. Steve taught those (and ethics training) for years. Maybe he could catch her up to the fact that it is now 2017 and women are no longer sweet little objects.

Solar is a GREAT pattern. I have some yarn ear-marked for that pattern somewhere along the great sock way.

OH.MY. You should see me scowling at that whole "women smiling" bit.
What.the.heck??? Is it not 2017??? And the instructor was a woman???? This makes me so mad. I've been a "you should smile more" victim my whole life.
I'm sorely tempted to say this to the next person who tells me to smile.."Oh, I am smiling... on the inside... where I'm picturing lighting you on fire and dancing around you as you burn."
Though admittedly, I may have a sick sense of humour...

Seriously?! Under what rock did they find that instructor?

I suspected you might be the attendee! Good for you (and everyone else) because someone had to call out insulting sexism disguised as customer service. On a happier note, your yarn and bag are wonderful, and I hope your hand continues to improve.

Wow....your instructor appears to have missed the turn of the century. Time traveler maybe? Good on you for being the fly in the ointment.

Bridget- Love the yarn and bag. I will admit to being a full-on bag ho.

Good for you to speak out... smile my arse! Your book looks excellent and I will be adding this to my read list - I am in need of some laugh out loud reading!

Your project bag is eye-catching and so is your started project. I hope your arthritis flare diminishes quickly.

Sounds like your company is operating in the dark ages...not just this example, but others you have provided that would actually be very funny if they were not real. Geeze. Good for you speaking out (of course I'm sure that doesn't help you any there...).

Love your yarn and bag (so cute!!), and hoping your flare up continues to diminish and that soon you can be knitting away for as long as you like.

Thank you for speaking up and for being instructive when doing so. I've actually had elderly men tell me to smile at the grocery store! Usually I ignore them, but once, I turned to one who made the suggestion and said, "Why are you looking at me?" in a slightly raised voice.

That took care of that.

There I was trucking through your lovely post. I was having all these happy thoughts about your book and bag and knitshare and wincing at your arthritis when my eyes got all cartoon big with "Are you YOU KNOW WHAT kidding me?!?" I'm so sorry that something like this is being taught, trained to professionals. I hope you made a complaint. Approachable for everyone or smiles for everyone in the context of customer service, fine. But there are not different rules for different people. UGH.

hmm. Actually I hate the smiles of women in customer service, just take me seriously and help me :) I read that book and enjoyed it overall!!

Serious? In this day and age a woman is supposed to smile and a man look approachable, I find that extremely disturbing. I hope you are on the way to your very fun weekend and have a great time in Baltimore.