Ugh  Back to work tomorrow after a week of vacation that even though it wasn't perfect, was still better than being at work.  I'm already telling myself that at least next weekend is a long weekend for Labor Day.  I hate wishing the week away like that, and am trying not to do it other than related to work.

Thank you for all of your kind words and concern after my last post.  To make a very long story short, I had been lucky enough to have two interviews for a new job at a place I think I would enjoy working.  I had not been assuming the job would be mine, but I felt I'd done pretty well at the interviews, and more importantly, it gave me hope that I could leave where I am, which is becoming more and more toxic every day.  So even though I hated going to work, I had hope.  Well, last Tuesday I got an e-mail from the HR person at the other place, telling me they were not "going further with your candidacy."  That's bad enough, but it was also the very first thing I saw on Tuesday morning, which didn't help.  Jobs of any kind are few and very far between around here, and it was the first call I've had for an interview in 2+ years of looking.  To say it was upsetting is putting it mildly.

I worked really hard last week to not let it ruin my whole week, and to concentrate on the good as much as possible.  For the most part, I was successful.  And as a dear friend said, try to focus on the small good things, and that you enjoy your life outside of work.  It doesn't solve anything, but it does help.  Those are wise words - I just hope I can keep them in mind.

So you see I am fine, and plugging away at other things.  Like my lemon meringue pie, which was a success - nice and tart but not too sour.  The last pieces will be for tonight (bad timing there!).  I am really thrilled with how well it turned out.

Our beach day was perfect - the temperatures were in the low 80s and there was no humidity to notice at all.  After we left the beach, we went and had a late lunch/early dinner at our fave clam shack, so that was a treat as well.  Sadly, it's the first time we made it to the shore this year.  Not that we usually go every weekend, but almost always it's more than just once by this time during the summer.

I've also been knitting of course, and I gotta tell you - I was really hoping the Scattered Wishes shawl would be finished by Labor Day weekend.  Not because it had to be, just because I thought that would be a good time for it to be finished.  I am on the lace border, which is 26 rows - 13 lace-patterned, and the other 13 just knitting back.  As you may recall, lace knitting and I do not have a solid relationship  And that lace border is kicking my butt!  Whether or not I've been using a lifeline, regardless of how slowly I go, it's just been a mess.  I am however, determined to "get" it.  I am back at Row 1 of the border, and will try my practice of *only* working on it first thing in the morning when I am freshest (and possibly only on weekends), and only do two rows at a time.  Every time I feel confident going past the second row I'm doing, I screw up.  I'm sure it's as much psychological as anything else, but I am determined to get it done!  Maybe just not by Labor Day ... ;-)

My socks are going well, and I've been reading a book I'm really enjoying.  This morning I spent about an hour and a half cleaning up in the garden.  Other than watering things, when it's really hot and humid, I just can't handle cleaning up.  But it looks pretty good right now  A few of the flowers we planted never made it, so I just pulled them up, but others are doing OK, and some are very happy!

This has also recently started: 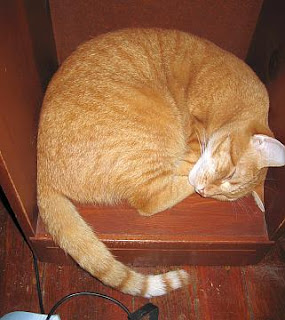 Here is Pip, happily curled up and napping.  You can't necessarily tell from the photo, but he has decided that the small cubby under the table in our TV watching area, where I keep my laptop, is his new fave place to relax and hang out,  He barely fits, and it takes him a few minutes to get situated.  He's content to be there whether or not the laptop is.  Sigh.  He is a weird cat!  If any of the others attempted this, he would narc them out in a second, especially if they got on top of the laptop ...

The weather is still nice here, which is enjoyable not just during the day, but nice for sleeping at night.  I keep thinking of everyone having to deal with the hurricane and its after effects in the Houston area, and hope they get some relief sooner rather than later.  It looks as if a lot of people are checking in on their neighbors and trying to help one another, and I know that some Philadelphia firefighters left today for the area to do what they could.  When something like this happens, it really does take a village.

And that's all from here on a Sunday night.  I hope you had a good weekend, and that the week ahead will treat you well.  I'll be back soon with a giveaway to celebrate (belatedly) my blog anniversary, so stay tuned!
Posted by Bridget at 7:05 PM
Labels: beach, cats, knitting, pie, Pip, reading, summer, vacation, weather, work

I do hope your Monday re-entry is as good as can be, and work gets better. I know it's a long shot that things/people might change, but I'm going to be holding out hope and good thoughts for you. Maybe Scattered Wishes needs a short time out? You can do it, and it will be beautiful, whether by Labor Day or later!

Six years ago I was where you are... in a job I couldn't stand that was getting worse every day. Going through job interviews (sometimes several for the same place) and feeling sure it would be the one... only to get the "sorry" email, or sometimes nothing at all.
All I can say is keep at it. Try not to let work creep into your private life, and just keep looking.
It took me a while, but eventually I found a better job - and one that gets better every year.
Yours is out there - it may just take some time and patience.

Pip looks absolutely relaxed in his cubby. He is such a handsome boy.

Sorry to hear about the job problems. I hope something better comes along.

But ..........you have the kitties to snuggle and the memory of a delicious pie to keep you going this week.

Im so sorry that your job hunt hit a glitch. Keep applying! You are a talented woman with so much to offer. Im glad you pie turned out wonderful. Big hugs to you

Kitties gotta sit where kitties gotta sit. Mine are all taking turns shoving themselves in an Amazon box I threw out on the deck. It's the most entertainment I have had all day.

I'm sorry to hear about the potential job. I recently applied for a job I really wanted & never heard back, so I can sympathize (although your job is definitely way worse than mine, so I hope something even better comes along soon).

I'm so sorry about your setback in the job search process. Disappointment is always hard -- but when it takes away your hope, it is particularly brutal. The advice you got from your friend . . . to focus on the small, good things . . . is excellent. Even though our jobs take much of our time and frequently drain our energy, there are many truly good things in our lives OUTSIDE of "work." I hope you can focus on the good things away from your job. Sending good juju for new opportunities! XO

I am so sorry about the potential job - but, I think your friend is right with her advice, even though it might be hard to follow. Wishing you better opportunities and the best of luck!

Oh, bother. So sorry. But you never know--the person they hired may not work out, so toss off a "thank you for considering me; please keep my application and information in your files for other opportunities in future" email/letter to them and keep your fingers crossed.

Love the picture of Pip. Every so often, my kitties will decide upon a "new" little cubby/clubhouse for their Very Own as if it hasn't been there all along. Who knows why?

Glad to hear the pie was a high point.

Pip is just too cute. Was thinking about you yesterday and hoping your re-entry wasn't too awful!

I understand the disappointment Bridget. Hang in there. We are all cheering you on. It's not easy but you have your wits about it and a bunch of human knitters, curled cats and family who believe in you and lots of things to enjoy in the meantime.

I too am trying to get some knitting done this weekend for myself. Partly to start that fall KAL with the gang. I just need a sense of completion I suppose.

I'm sorry you were disappointed in not getting that job, what a bummer. I agree, keep at it, you never ever know when and if you will find a better place to work!!

I'm sorry about the job thing. Working in a toxic place just sucks the life out of you.

Cats are weird indeed. Zoe has been sleeping out on one of our patios at night, which is fine, but she has chosen one of the tree planters, she sleeps in the dirt under the tree.