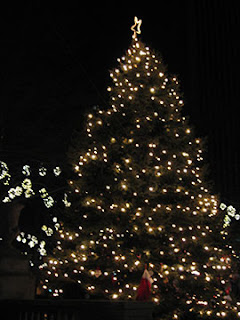 Here's the thing about Christmas though:  You don't need to be a child to love it.  I for one love it even more as an adult than I ever did when I was little.  And if you ask me, the single most exciting day on the calendar is today, Christmas Eve.  What?  But isn't Christmas Eve just the day you have to get through so you can get to the "real" holiday?

Christmas Eve is the very last day of Advent, the season of waiting, of expectation, of hope.  We've been told something is coming, and we have been preparing, and the hope has grown.  The anticipation is at a fever pitch.

Growing up, and now, Christmas Eve is a busy - but definitely fun busy - day.  As a kid, I would wake up early and have breakfast with my dad, who was an early riser.  Everyone else would still be asleep, and we would eat, drink, and discuss the day.  I'm sure I did most of the talking, and that 99% of it involved Santa - what should we leave for him and the reindeer, did it matter if there wasn't any snow - you know, important things like that. 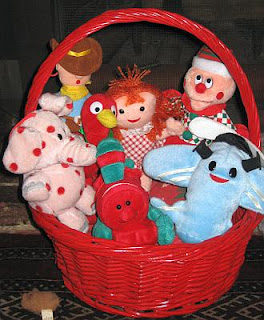 But the big thing at our house for Christmas Eve was the Christmas dinner.  My parents were very social, and at some point they decided that since we had so many people who stopped in on Christmas Day, it was better to have our "official" Christmas dinner on Christmas Eve.  And that was as exciting as opening gifts the next day, because dinner was always full of "fancy" foods (read: things we could not regularly afford to have), and preparation happened throughout the day.  The fanciest linens came out to go on the table (after someone would iron them of course!), and - get this - we had appetizers!  Yep, every Christmas dinner started with shrimp cocktail, and if that isn't the height of living, I don't know what is. 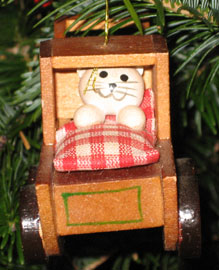 Christmas Eve now is so much the same, but different.  The Tim usually has to be at work on Christmas Eve, as he does today.  So, the day starts with me having breakfast and planning the day with the cats.  We will decide the order of what needs to happen, which mainly involves making sure we have the ingredients for dinner, and some gift wrapping.  At some point this afternoon, I'll take a walk up to Rittenhouse Square, to be around people, and enjoy the hustle and bustle of this day without needing to worry about not being ready for it.  This is the time when Dug was alive when we would put on his reindeer antlers and jingle bell collar and make people smile when they saw him.  It's not the same at all without him, but it's still part of my Christmas Eve. 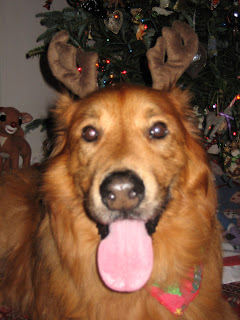 Then I'll come home and start fixing our Christmas Eve Risotto.  This year, The Tim will actually be home after 3:00 instead of at 7:00, so that will be exciting!  (Though I'm guessing he'll probably take a nap, so my day will be mostly the same.)  After a leisurely meal, we'll just spend the evening relaxing and watching corny Christmas programs.  This one (but only "The Night Before Christmas" part) is an absolute must-see:


We absolutely LOVE this because it is just so ... much.  (The Tim:  "I think the Nativity one is really bad.  It looks so fake."  This is why we don't watch it.  Apparently the high quality of the first one causes the second to pale by comparison ...)

Before we head to bed, we put gifts under the tree, and put the Baby Jesus into the creche (but only after we have all given him a kiss and said, "Happy Birthday, Baby Jesus" ... yeah, we're weird that way).  Then we ring the sleigh bells that hang on our front door to remind Santa where we live, and it's up to him from there.

And you know what?  Every single year, when we get up the next morning, he has remembered to stop at our house!  We have stockings filled with goodies, and it's time to get Christmas Day underway.

It's the best.  But nothing beats Christmas Eve, because it's a day of Hope. Anticipation.  Love.

And there were in the same country, shepherds abiding in the field, keeping watch over their flock by night.  And lo, the angel of the Lord came upon them, and the glory of the Lord shone round about them; and they were sore afraid.

And the angel said unto them: "Fear not:  for behold, I bring you good tidings of great joy, which shall be to all people.  For unto you is born this day in the city of David a Savior, which is Christ the Lord.   And this shall be a sign unto you; Ye shall find the babe wrapped in swaddling clothes, lying in a manger."

And suddenly there was with the angel a multitude of the heavenly host praising God and saying, "Glory to God in the highest, and on earth peace, good will toward men."

This post is part of sprite's Virtual Advent Tour, and for another year, not only have I participated, but I've enjoyed it all.  Thanks to her for keeping it going and getting it organized so that we can all appreciate others' thoughts, traditions, and ideas for the season.

Joyous Christmas Eve to all of you!

This is a lovely, lovely post, Bridget. You truly do love Christmas more than anyone I know.

Happy, Merry Christmas. I know you will make it a good one.

Bridget, I wish you and The Tim every magical moment you can get. i loved to hear about your Christmas with your Dad, I hope you have a wonderful holiday.

Christmas Eve was always the big day in my family too. We would all make a big lasagna and meet at Mom and Dad's for dinner to wait for Santa on the fire truck to come down the road. The kids would fall asleep all over the house while the grownups drank their nog and danced to the sweet sounds of Mitch Miller until the wee hours. Good times.
That photo of Dug in his antlers is so precious. What a big sweetie.

There was a certain thing we ONLY had at Christmas meal --- tomato juice!! Sometimes it IS the simple things that make the holiday.

A lovely, perfect post, Bridget, and exactly what I needed before diving into today. Thank you for writing it and for being a part of our Virtual Advent Tour family.

Merry Christmas to you and The Tim and the kitties.

This is a beautiful, heart warming post you have written for this blessed time of you. I wish you and The Tim a very Merry Christmas! Hugs, Pat

I love this post! I'll be the first to admit that for me some of the excitement and magic of Christmas is gone. I need to make some changes.

Love the reindeer antlers on Dug. He had a sweet smile.

I loved your Virtual Advent Post. I too believe that we are all children and we can love the magic of Christmas.
Loved hearing about you and your dad as you got up early together!

Just beautiful! (And shrimp cocktail is the epitome of fine dining.)

Absolutely. No other day even begins to come close to Christmas Eve. (BTW, the Eve must-watch here is "The Muppets Christmas Carol." I also like "A Wish for Wings That Work," but was always alone on that one.