Oh what a wonderful Christmas Eve and Christmas Day we had!  Of course, we are still celebrating, but I thought I'd share some photos I took while we were enjoying things.

First of all - The Tim had to work on Christmas Eve, which was not in and of itself weird, since while he was at the bookstore, that was always the case.  However, in past years, he worked until the store closed at 7 p.m., and would usually get home and we would eat dinner by 8 p.m.  Not a lot of evening left after that, which was always fine, but not as good as this year by a lot!  This year he worked until 3 in the afternoon, and was home by 3:30 - it was like we had the whole day together, and that was THE BEST.

Christmas Eve while we were setting the table, etc. for dinner, Milo the Koodle sat on the chair across from the tree the entire time, and later into the evening.  We decided he was either a) hoping to catch Santa visiting, or, b) making sure Santa saw what a good boy he is (ahem). 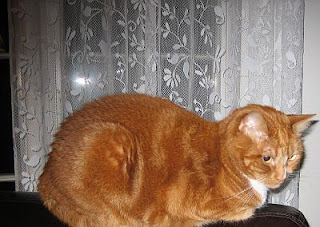 (He had been nervous all day (and is still recovering) from an event earlier in the day, so this is as much as we saw him.  That's a story for another post.)

We were amused at our Surprise Dinner Guest: 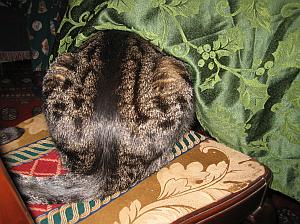 Even though we didn't do as much decorating as usual this year due to one of The Tim's projects, our tree still looks great. 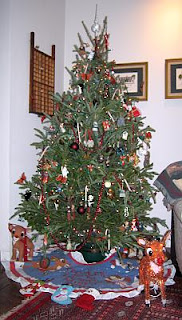 And yes, there are two Rudolph's under the tree.  The one on the right lights up and is supposed to be outside, but The Tim doesn't "want the weather to ruin him," so he stays inside ...

Jack was the first kitty to come downstairs on Christmas morning, and was quite pleased to see that Santa had in fact visited our house! 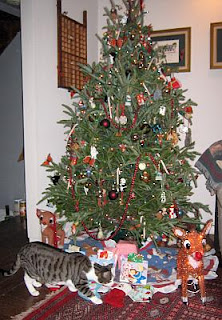 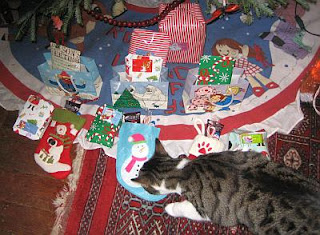 Stockings and packages were opened, toys were played with, treats were eaten, and general hilarity was the tone of the day. 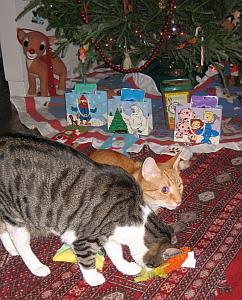 The Tim put this ribbon/garland/whatever on Pip - when he was busy with something else, it was fine, but when he'd remember he was wearing it, he'd go nuts!  We took it off after a few minutes after taking this picture. 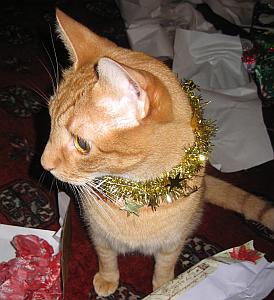 A few years ago, a friend sent our cats at that time a catnip-filled Newt Gingrich toy, and they really hated that sucker - they would attack it and tear at it, and it was hilarious.  This year, that same friend sent a catnip-stuffed version of our current Eejit in Chief, and he got a LOT of attacks, etc.  Which pleased us immensely. 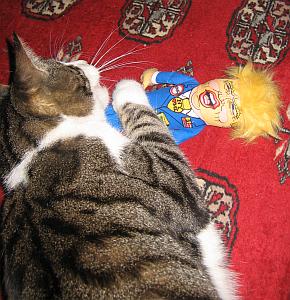 Eagerly waiting to hear the rest of the story. . . 😎

OMG --- that Eejit in Chief toy is TRULY frightening!!! YIKES!

I wholeheartedly agree with your cats' political views! Enjoy the rest of your celebrating.

Attacking the catnip Prez would have been hilarious to see. So glad you had a good day.

What a great post! I smiled and laughed all the way through it. I love Jack resisting and his butt visiting the Christmas party. hehe. I'm glad you got to spend even more of the day with your dearest. Merry everything to both of you.

Hilarious! I need that Catnip Prez toy for myself so I could stick pins in it.

looks like a perfect Christmas to me :) Love that you had a great day!!

Oh, your Family Christmas sounds Joyful! I'm so glad for you all.

I love your family.

It sounds like you had a wonderful day! Your cats were lucky for sure. I love the cat nip filled trump, it would be so fun to give that to my cats too!