Well, this is definitely a case of the best laid plans and all that.  I signed up again this year for sprite's  Virtual Advent Tour, and I have known for a while that today was my turn.  I had my post all decided in my brain and knew what photos I wanted to use, and I was set.  Then last night I picked up my laptop to get it set up, and ... nothing.  Zippo.  Nada. I did what I thought might "fix" it, with no luck at all.  The Tim was not home, so I couldn't get his assistance.  So I decided that I would get to work early and at least have my post up using my work computer, even if there were no other photos.  So here I am, and I'm glad it's Friday at least!

OK, you don't necessarily care about that so let's move on, shall we?

Growing up, our family didn't leave near any of our other family, so holidays were completely on our own.  My mother was an only child, and though my father had siblings, they had been broken up as children to live with other relatives when his father was killed.  So he was close but not really with them.  And my parents were not the types to stay in one place if moving offered other opportunities, so we moved around a lot.  However, they both had decided that their own family was going to be different.  So we were pretty close-knit, and every single holiday was a BIG DEAL at our house.   Especially Christmas - my parents thought that was the highlight of the year!  (So you see I get my holiday love honestly.)

Our Christmases were so much fun!  We usually started decorating after December 2, which was my mom's birthday.  She was a firm believer in letting people with December birthdays actually celebrate their birthday the same as if it came in July.  We always had a tree, and lots of decorations, and stockings.  There was cookie baking (just the basics, my mother was only "domestic" at holidays), sing-a-longs (in the house, in the car, everywhere!), and just general fun.  On Christmas Day we would wake up and go to church, which could be excruciating, since Santa *always* showed up, and we would have leave the fun to go.  Always there were presents, filled stockings ("Something you want, something you need, something to wear, something to read," plus an orange and some nuts), and one or two presents from my parents.  We ate!  We drank!  We made merry for the entire Christmas season!

My parents never seemed stressed out.  They never complained that it was too much.  They never told us not to expect much.  I remember as an adult, I once mentioned this to my mother.  She told me that they both loved Christmastime so much, it was always as much fun for them as for us.  I asked her once why she never freaked out about holidays, meals, gifts, etc. and she told me it was because the only expectations she had to meet were hers and my dad's - no one else was around to compare, comment, or judge.

Now the thing that most amazes me about this when I think back on it, is that my parents had pretty stressful lives.  Most of the time, we were ridiculously poor.  Sometimes we were farmed out to stay with relatives for a while when they were out of work.  There were a lot of huge medical bills.  When things were good, they were really good.  And yet, only as an adult did I realize how bad off we were!  Oh sure, other kids lived in nicer houses/neighborhoods and had more possessions, better clothes, etc., but it never seemed like a big deal.  If we wanted something, we'd be told that it wasn't something we could afford, and even though it was disappointing, that was that.  My mother used to say that just because you were poor, it didn't mean that you had to be dirty, or that you didn't still need to have manners, so even if we didn't have the best things, we always had clean, solid things and knew how to behave.  We went to Catholic schools most of the places where we lived, so we wore uniforms like all of the other kids.

I do not ever remember a Christmas that wasn't a big deal.  I don't remember us ever not being all together, and having the time of our lives.

When I think about it all now, it makes me realize that although my parents were not - by any definition - perfect, or saintly, they gave us the best they could and the best they had, often in really crappy situations.  But they kept the simple idea of what Christmastime should be - family, fun, and togetherness - intact.  So much so that my memories are happy, simple, and lovely.

We should all be so lucky as to be able to pull that off, right?

And now that I poked around on my work computer, I was able to find one photo of my own for this post, so enjoy Christmas Moon Man, a handmade gift from a former co-worker long ago.  :-) 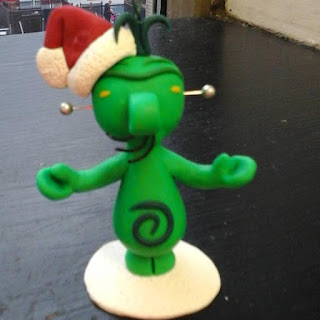 Have a great weekend!
Posted by Bridget at 8:25 AM
Labels: Christmastime, family, Virtual-Advent-Tour

Oh, Bridget. What a lovely story! No wonder you love Christmastime so much . . . but also . . . no wonder you are such a kind, thoughtful, and giving person. Thank you so much for sharing. Your story will make me smile all day.
XO
PS - Christmas Moon Man is pretty awesome.

What a wonderful story about your childhood Christmas memories. Thanks for sharing it. Also, I absolutely love your current header with the Christmas kitties in the window!

This is a wonderful remembrance, especially moving to me because I had stressed parents who maybe didn't deal with things quite as well as yours. I think mine did their best, but I was often told that it was too much and too difficult for them, and your parents showed your family what is really important. That is an amazing thing to do. Thanks for sharing!

I had a similar childhood, and also realized as an adult how my parents struggled to survive with six children. One year, my Mom made five or six dresses for my doll from scraps of fabric as a Christmas gift. Those dresses, candy and an orange were all that I needed. The dresses brought many hours of enjoyment. I learned early that my parents were actually Santa.

I think your post today exemplifies the holiday spirit -- both in terms of your parents' approach to Christmas and in terms of your making the best of the laptop situation (since I know how painful spending extra time at work must have been for you). Thank you for sharing such a wonderful story.

What a lovely post Bridget. Thanks for sharing! Mr. Moon Man is great!

What a wonderful tear jerker of a post. YOUR parents were amazing! That is true Christmas spirit!
I love the Virtual Advent posts so much!

It was so nice of you to share this reminder of what the season is really all about. With this winter storm approaching today, all the hustle and bustle has come to a halt and I have to admit I am enjoying it immensely!

It sounds like you had wonderful Christmases growing up with your parents. IT is really nice that they made it so special for you. I love this time of the year! Hope you enjoy celebrating this year too :)

This story of Christmas Past--minus Catholic school--could have been written by me. With a father who was a union steelworker and a stay-at-home mother, we were quite poor also. Especially when the mill went on strike or my dad was felled by serious illness. Like you, I merely accepted our situation as The Way Things Were, and didn't feel envy or deprivation.

Thank you for sharing your life with us Bridget. Your parents really sound like amazing people. I think it is hard when you are a child to realize that your parents are people too, just trying to do their best. OF course your memories are good, so are mine. My parents always made a really big deal about Chrstmas. We weren't wealthy, but we had what we needed. My Mother often went without so we could have what we needed. That is what parent do!

I was thinking about my childhood Christmases the other day. I, too, have memories of happy days, despite learning when I was grown that my mother was not a fan of Christmas. At all.