It occurred to me that although I had said I was going to make this Rosemary and Peppermint Sugar Scrub for some Christmas gifts this year, I never followed up to let you know how well it did or did not work.  So today is the day to give you my report.

According to the recipe, each batch makes two cups.  I looked at several different options for jars to use, and finally decided on some clamp type jars that I got at Ikea.

As you can see if you have looked at the recipe, it's really straightforward.  The only thing that was different for me was that it took approximately 45 to 60 seconds for our microwave to melt the coconut oil; and, I used more drops of each essential oil for scent.

I had also considered adding some color to them, but I couldn't find any of our food coloring.  Finally, The Tim informed me where he had "put them away" after Easter last year - when I was on the last two!   But I added just a couple of drops to those, and got a lovely pale pink color.  Here's how it all looked when I was finished. 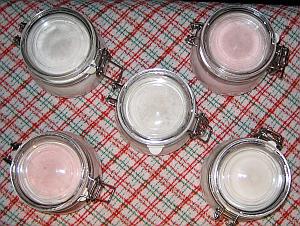 I have to say that if you need a fun but also quick gift, this is a good one!  The hardest thing for me was getting the coconut oil out of its container to put into the measuring cup to melt, as it was pretty solid.  But otherwise, it was really easy, and it was also fun to see the ingredients become a scrub.  The house smelled so good for the rest of the day after I made these!  I took the small amount left in the bowl once I was done, and put it into a small jar to use myself - it is so nice, and my hands have never been softer. :-)

The whole thing was discovered to have one drawback though - the jars are glass, which meant that sending them through the mail could be trick (no problem, bubble wrap), and well ... they ended up being kinda heavy.  So they added a bit of weight to packages.  Overall though, I still saved some money with this idea, which was the original plan.

Switching gears, I'm glad you all enjoyed Santa Pip!  He's such a funny cat - he wasn't exactly thrilled to be dressed up, but didn't really make a fuss, and seemed more puzzled than anything else.  I told him that he made people smile, and that is what Christmas is about, so I'm guessing that the real Santa will reward him for being a good boy ...

Also, we had tickets this past Saturday night for the Christmas concert by the Philadelphia Boys Choir.  It was fantastic, but I had to laugh when they started one number - "Carol of the Drums" ... or, as most of us know it, "Little Drummer Boy!"  The Tim almost had a heart attack, and at least 10 times on the way home told me he has NEVER heart it called that (neither have I).  From some of your comments a few posts back where I learned he has many compatriots in  his distaste for that carol, I thought you'd enjoy the story.

I am behind on responding to comments, but I plan to do the best that I can to catch up. Though for some of you I have either misplaced, or never had, your e-mail addresses to respond.  So please know I'm not ignoring you!  I guess I should try to respond on the blog, but I just never think to do so.  I'll get it together one of these days, honest.  :-)
Posted by Bridget at 5:57 PM
Labels: Christmas-carols, Christmastime, familly, gifts, Pip

That looks like a great Christmas gift -- fun (and fairly easy) to make, pretty, AND useful! I'll bet each of your recipients will appreciate your very special gift. XO

That scrub looks and sounds really nice. I can see the advantages of using plastic for mailed gifts, but there is something so much more elegant about glass.

Bridget- Those are a great idea- I'm never organized enough to get that kind of thing together. Great gift.

And Santa Pip- too funny!

Your scrubs look beautiful and I'm going to make some for myself so I can enjoy softer hands, too. With cold weather, lower humidity, and doing some outdoor work, my hands are quite scratchy, enough that they're beginning to snag yarn (and we can't have that). Thanks for the recipe!

When I was coming up with that carol-year trivia post I wrote a couple weeks ago, I learned that "The Little Drummer Boy" was originally published as "The Carol of the Drum" and that it was written way later than I would have guessed -- 1941. It wasn't recorded for another decade (instead having been intended to be an a capella choral piece), when the Von Trapp Family Singers released it. In the late '50s, Harry Simeone re-titled it and released his arrangement, for which he gave himself a writing credit. Having not heard the Von Trapp version, nor played the sheet music of the original, I can't say one way or another how deserved I feel that was, although I do know it was a very common practice at that time.

Mmmm....I can smell those scrubs from here!

Your scrubs look quite lovely in their jars. I'd be very happy to receive one, especially with that scent.

I have always loved "The Little Drummer Boy", and I always loved singing it with my high school chorale in four part harmony. It was a very moving song and popular in concert whenever we sang it.

Those turned out great Bridget! I love this idea. I may need to make for my Sisters' Weekend next year. I may make some sooner for me - LOL

Your scrubs look great! What a nice idea. I'm also a little jealous. If I attempted to dress Minnie, she'd eat me alive while I slept. Santa Pip is adorable!

The recipients are going to enjoy the scrubs. Where do you buy the coconut oil?

I laughed out loud at the office over the Carold of drums. spittake!! Sugar scrubs are a great gift idea! I'm too lazy. Seriously WAY too lazy. The color turned out fabulous too. Well done! Wishing you well Bridget!

The scrubs look so pretty! Glad it all worked out for you.

I made some sea salt scrub last year and really loved it. I did a grapefruit scent --- which seemed perfect for Florida.

Your scrubs look wonderful Bridget. As for Little Drummer Boy I can deal with that one but any version of Feliz Navidad puts me over the edge. I can honestly say I detest that song.