If you recall, when I sent out the last package for my Christmas in July giveaway, all I showed was this: 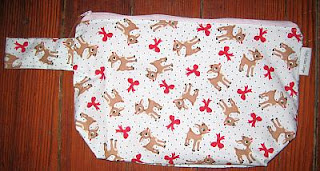 Which, frankly, would be a good enough giveaway in my world, as it has Rudolph on it and you all know my obsession love of Rudolph, right?

But since it was the grand finale of the month of giveaways, I wanted it to be extra special, so I promised surprises inside of the bag.  This past week, Cheryl let me know that the package arrived in Canada, so now I can share what was tucked inside.

I wanted it to be full of goodies, but also not weigh too much, especially since it was headed across the northern border (wall-free, as of this writing!).  So I pulled out my bag o' yarn from my Cozy Squares of Memory blanket, and, including yarn from my Christmas in July socks, made up some minis - 24 of them, in fact! 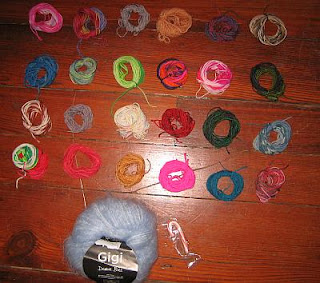 Along with a ball of soft, pretty mohair yarn, and a mini-candy cane, I thought it was a happy surprise - or at least it would be for me!  I arranged it so that it would look more like an Advent wreath 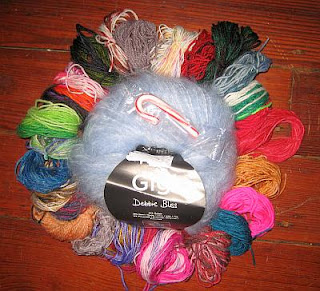 and then I squoojed it into the project bag, so that [theoretically] it would have some semblance of that when opened.

The Debbie Bliss Gigi yarn and the candy cane were always going to be part of the package, but I had several ideas about what the other contents would be.  I don't have a scale, or any way to really be sure that the minis were of significant yardage, but I tried to make them all the same size, or as close as possible to that.  Cheryl reports that all was received safe and sound, and that her daughter claimed the minis for a scrappy project she was making.  Cheryl sounded really happy with the package, and that made me especially happy.

I have heard from a couple of the other winners that their packages arrived safely, and that they were pleased with the contents, so I feel that my Christmas in July was as successful as I'd wanted it to be, which is very exciting, since it was so much fun on my end!  Thanks again to all who participated.  I'm hoping I'll be able to make it an annual event, since I think I enjoyed it more than anyone else.

Have a lovely Labor Day weekend for all of those in the U.S., and have a lovely regular weekend to everyone else!  If you still have things you wanted to accomplish during August, I'd suggest you get moving ... ;-)

Posted by Bridget at 9:05 AM
Labels: christmas-in-july-2018, giveaways, packages

That really is an extra-special prize! If someone wasn't already knitting a memory/scrap blanket, all those minis would be wonderful inspiration to start one. I hope you're enjoying your long weekend, and that the rest of it is wonderful.

Hope you have a good, relaxing Labor Day weekend and hopefully we will see you next weekend at the sheep fair.

How clever! That is a great surprise.

I hope you have a wonderful weekend!

What thoughtful surprises! You really put together a very fun contest-month, Bridget. I'm glad it was as much fun for you as for the winners!!! XO

You were very generous! I hope the winners are thrilled

What an incredible prize! Wow! It was an awesome contest!

Wall-free as of this writing...love it! (It would be perfectly understandable if Canada decides to construct one at this point. Sigh.)