I am a big fan of patterns - polka dots, plaids, but especially STRIPES!  They just make me happy, and I recently started a project that involves knitting stripes: 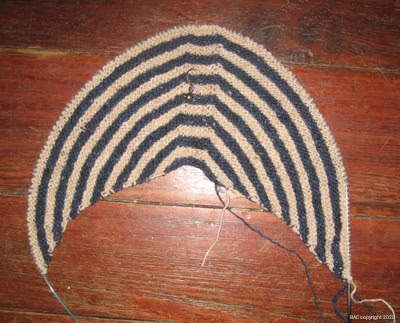 This is the start of my Stripey Kerchief, using the Polkagris pattern by Kate Davies.  I've had the pattern in my library for a long time, and also bought the kit when it was offered when the pattern first appeared.  I kept thinking I'd knit it, but then other things would jump the line and it would get pushed away again.
One of the items I'd knit that was the most worn/used ever was my Silk Kerchief.  It was just the right thing to wear around my neck with my coat for most of the winter - warm, but not bulky.  I wore it all the time, except when it would be bitterly cold, and I'd pull out a large scarf to wrap around my neck and my face.  As a matter of fact, I wore it so much, for so many years, that it finally got worn spots and started to unravel!  So last year I had to admit it had lived its life, and was ready to be laid to rest.  However, since the Silk Kerchief pattern had been duplicated and sold by several other designers in spite of legal actions, Kate took it down and it is no longer available.  Which would not have been a huge problem, if my old computer had not died along with all of the information stored on it, which included that pattern.
So there I was, with no neck kerchief, and though I didn't think it would be that much of a problem, it was actually really frustrating.  Everything else was either bulky, or too warm, or just not the thing.  And then the light bulb went on, and I remembered that I had everything I needed to start a Polkagris!  So last Sunday I sat down to start, and WHOA is this pattern addictive - I mean, it's seriously a case of wanting to do just one more row/stripe.  To the point where I have had to force myself to put it down so that I don't end up with sore hands and wrists!
Even so, I think this is going to be a quick project, and that I will definitely be wearing it regularly.  As a matter of fact, I told myself that I could make a few of them, and that would serve as 1) an extra for myself so that when one wears out, I have a spare, and/or 2) great gifts for the holidays.  Any fingering weight yarn would work, and stripes - though fun - would not be required.
Of course, you could use any weight yarn if you wanted something a bit bigger.
I don't know if I'll do anything other than this one right now, but in the meantime
OH THOSE STRIPES!!!
Posted by Bridget at 8:59 AM
Labels: stripes, wips

Wow! As a non-knitter, this looks complex to me!

I love all things Kate Davies yet I have never seen this. I love it. I'm a big stripes fan too and could use one of those myself. I may have to go stash diving as soon as I finish up a few things.

That silk scarf is adorable. It's so sad that it's unavailable.
I love stripes, too, and it looks like you've found a replacement!

Knitting addiction is the best! Love your new project, I see many in your future. Stay safe.

I love the look of knitted stripes. I just finished up a stripey block on my scrappy blanket.

THERE IS JUST NOTHING LIKE A KNIT UP THATYOU CANT GET ENOUGH OF!!! ENJOY IT LOOKS PRETTY ALREADY

I have to admit I do like striping for knitting as well!