I Do Have Knitting. I Don't Have Photos.

I'm usually pretty good about taking in-progress photos of my knitting to post here.  So even though it takes me a while to finish a project, I can still document how I'm progressing (mostly for myself, but if you like the photos, more power to you).  Lately though, for whatever reason, the knitting has been going on, but the photos have not.
Well, OK, I have been taking some photos, but they are non-knitting screenshots from the TV: 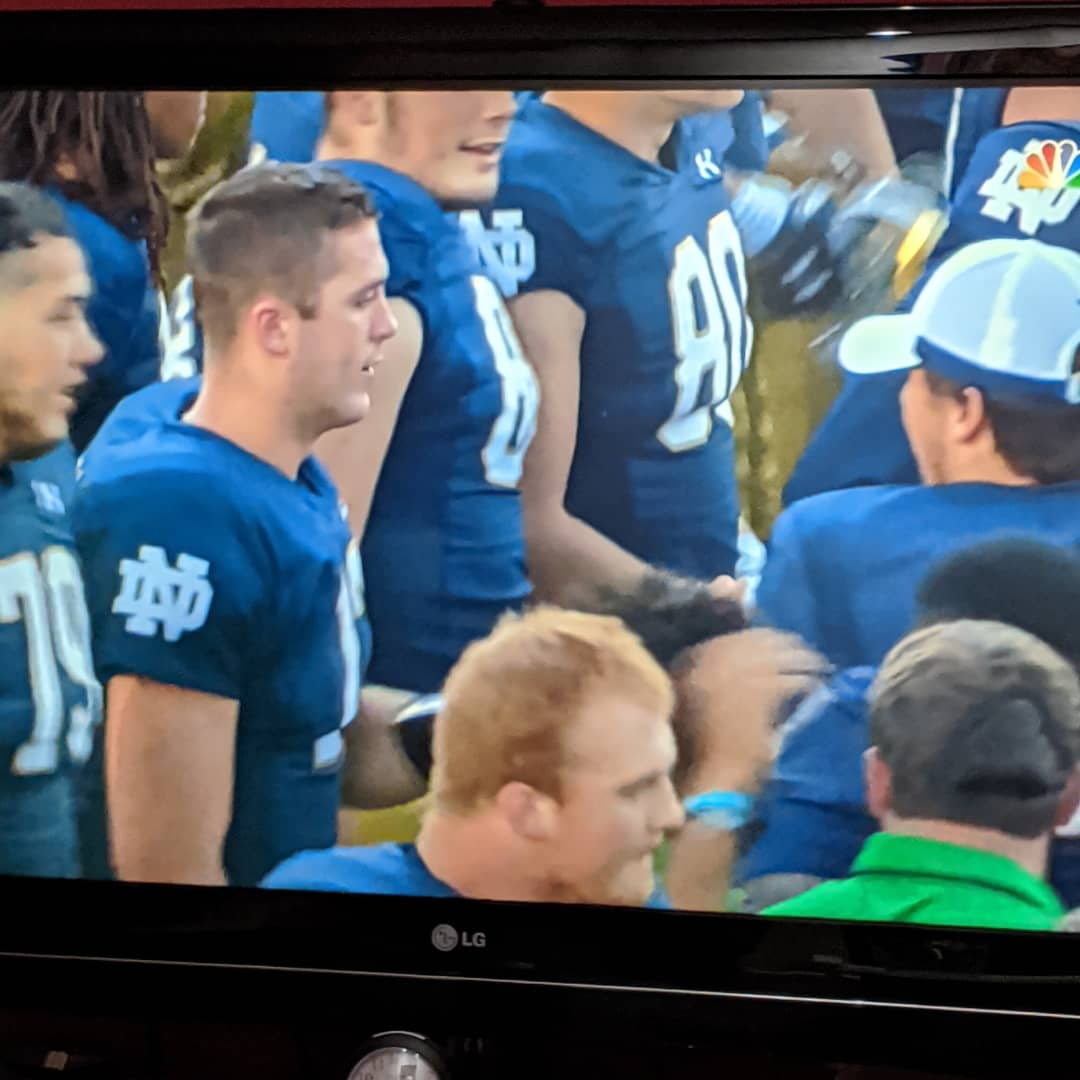 The end of a Notre Dame football game, and a victory - YAY! 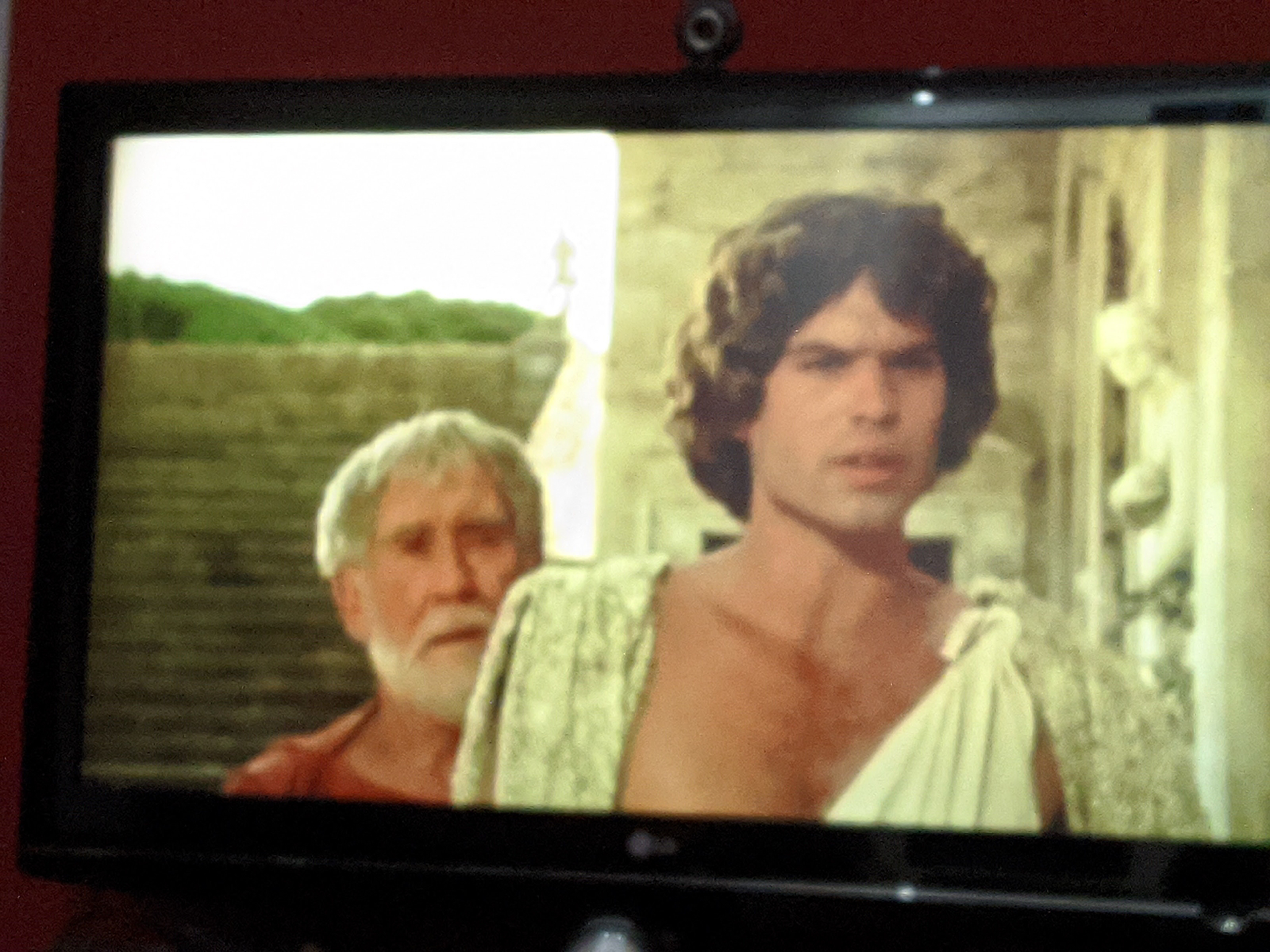 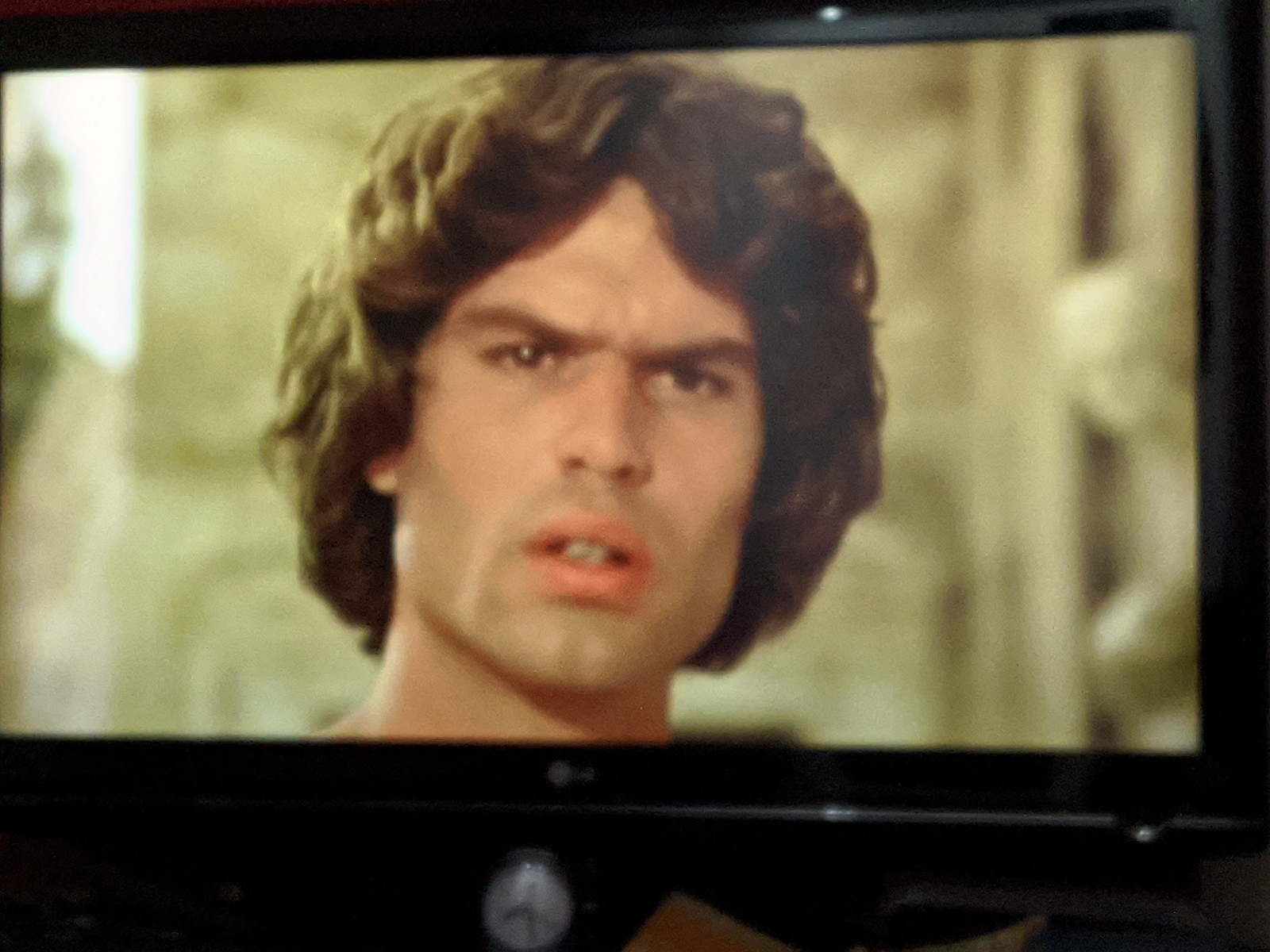 Two shots from the movie "Clash of the Titans" that I came across last night.  OMG this has to be one of the worst movies EVER!  You have to wonder why Burgess Meredith agreed to be in it - did he need the money to afford a sandwich??  And then of course the dramatic stylings of one Mr. Harry Hamlin (or as he is known at our house, Harry Hamhock)!  I posted these on Instagram and my friend Lisa commented "His face never got any smarter," and well, I had a good laugh at that.  I remember seeing this masterpiece in the theater and it was SO BAD, that I laughed my head off the whole time.  Which was a problem, because everyone else in the theater was taking it very seriously.  Which of course made it even funnier to me.  Wendy commented on Instagram that she saw it on a double feature with "Raiders of the Lost Ark" and I cannot wrap my brain around that combo.
So anyhow, I can *tell* you about my knitting for now, OK?  I'm at the heel of the second sock of a pair I was making and showed a few posts ago.  I am hoping to finish it by the end of the week, so I can start a pair of socks for The Tim as an anniversary gift.  It's doable, I just actually have to do it!
Then I am also working on this pattern (Ravelry link, beware if that's a problem) for my niece Liz.  Remember a while back when I showed you the photo of the very beginnings of the Hipster Shawl I was making for my niece Julie, who is a hipster?  Well, scrap that project.  I managed to get the crossed stitches OK, but oy there was a lot more going on in that pattern, and my brain had neither the available real estate nor the desire to continue, at least not now.  So I frogged the bit that I had, and switched projects and nieces, so to speak!  Actually, this makes sense, because last year I knit hats for Julie and her family for Christmas.  So I have decided that this year Liz and her family will get knitted gifts.  I'll make her this shawl, knit a Musselburgh hat (non-Ravelry link) for her husband Greg, and then a still-to-be-determined item for their son Zach.  I knit him a hat last year, so I was thinking fingerless gloves.  The idea there was that since he is a teenager, he might wear them, even if he doesn't wear gloves or mittens.  Of course, it's likely a moot point regardless what I knit for him, because he is a teenager, and I'm sure would rather have money or some other item that I know nothing about or can't afford.  I just figure for a few more years, he is stuck feeling like the kid in the movie "The Christmas Story" who gets the bunny/footie pajamas from his aunt, and his parents make him try them on.  But Zach is a good kiddo, so he will know it's the thought that counts.  😊
I also have a continuing saga of swatching for a sweater I would like to try.  It required a regular stockinette swatch, and a garter lace swatch.  I hit the nail on the head with the stockinette swatch, but not with the garter lace swatch.  So I tried again, and still no luck.  Then I realized that I had done both of the garter lace swatches with the wrong sized needles.  What a maroon!  So over the weekend I made sure to make a swatch with the correct size, and hopefully when it dries and I measure it, I'll be good to go.  Word to the wise - when you have issues with a swatch TWICE, you may want to be sure you are using the needle size indicated in the pattern.  Geez.
(OK, so at least that last link was to a photo related to knitting ... 😉)
Posted by Bridget at 8:28 AM
Labels: football, knitting, movies, wips

Clash of the Titans was my two son's favorite movie when they were kids. They watched it over and over. I could probably recite the dialogue by heart this many years later.

I watched Clash of the Titans about a billion times when I was little - that and Jason and the Argonauts. Dad loved stuff like that and I watched a lot of what Mom dubbed "crap".
It's funny you should mention it actually, Dave and I just watched a documentary on the man behind the special effects in those movies. You might enjoy it:
https://www.youtube.com/watch?v=6DgdJyOBN9Q

Sounds like your needles are going to be VERY busy!

Two things always come to mind with that movie. First, I enjoy Ray Harryhausen effects. Second, when it was in theaters, one of the marquees near me had it as "Clash of the Titnas." It's still the title I hear in my head.

You have a ton of great gifts ready!!