Perfection In One Day

First of all, thank you for your kind support and commisseration about my work situations in my last post.  Please be assured that everything that can be done has been done, even if to no avail.  Though I'm guessing that now you can appreciate more than ever why I am dreading next week, when we have to return to the building to work five days a week.  At least being at home some of the time gave me some space and a buffer.  Oh well
ANYWAY, the important thing here is to share some of our weekend with you.  This past weekend, both the NJ Sheep and Wool Festival and the Lehigh Valley Fiber Festival returned to in-person events.  I love going to the NJ one, but this year just didn't get myself together to go.
Instead, since it sounded as if the weather would cooperate, The Tim and I planned an outing where Hamlet could join us.  So we got into the car and headed a bit northwest to the Andorra Meadow - about 20 minutes away on a Saturday with little traffic that early in the morning.  It's a little more than 2-mile trail that ends up in a meadow.  We hadn't been there before, so we were exploring as well. 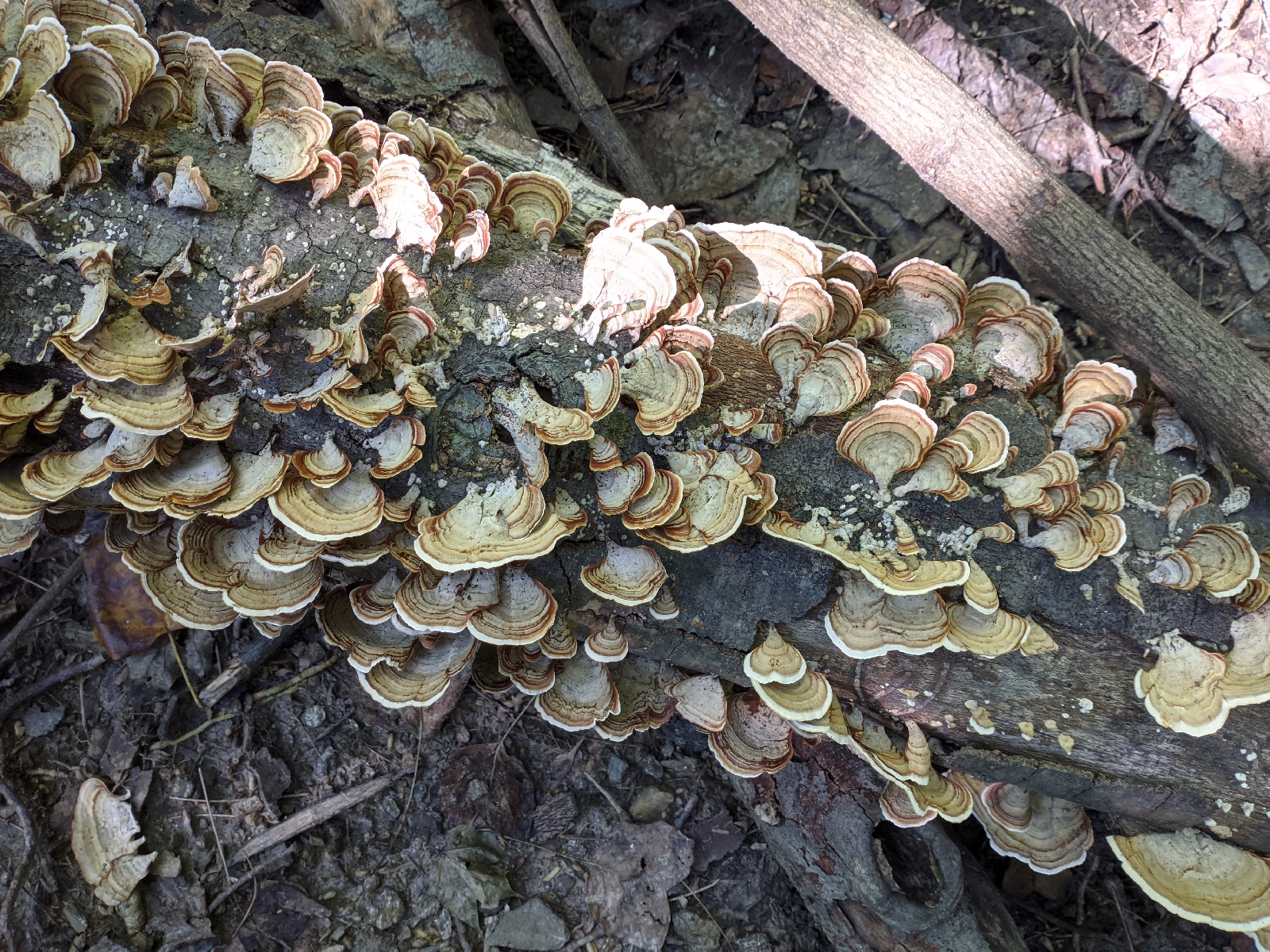 Me to The Tim: We can tell people we went for a hike, and found some fungi(s).
The Tim: [crickets]
In any case, it was wonderful, and Hamlet had a great time!  For the whole time we were there, we ran into only two other people (and of course Hamlet made sure that they petted him).  It was perfect. 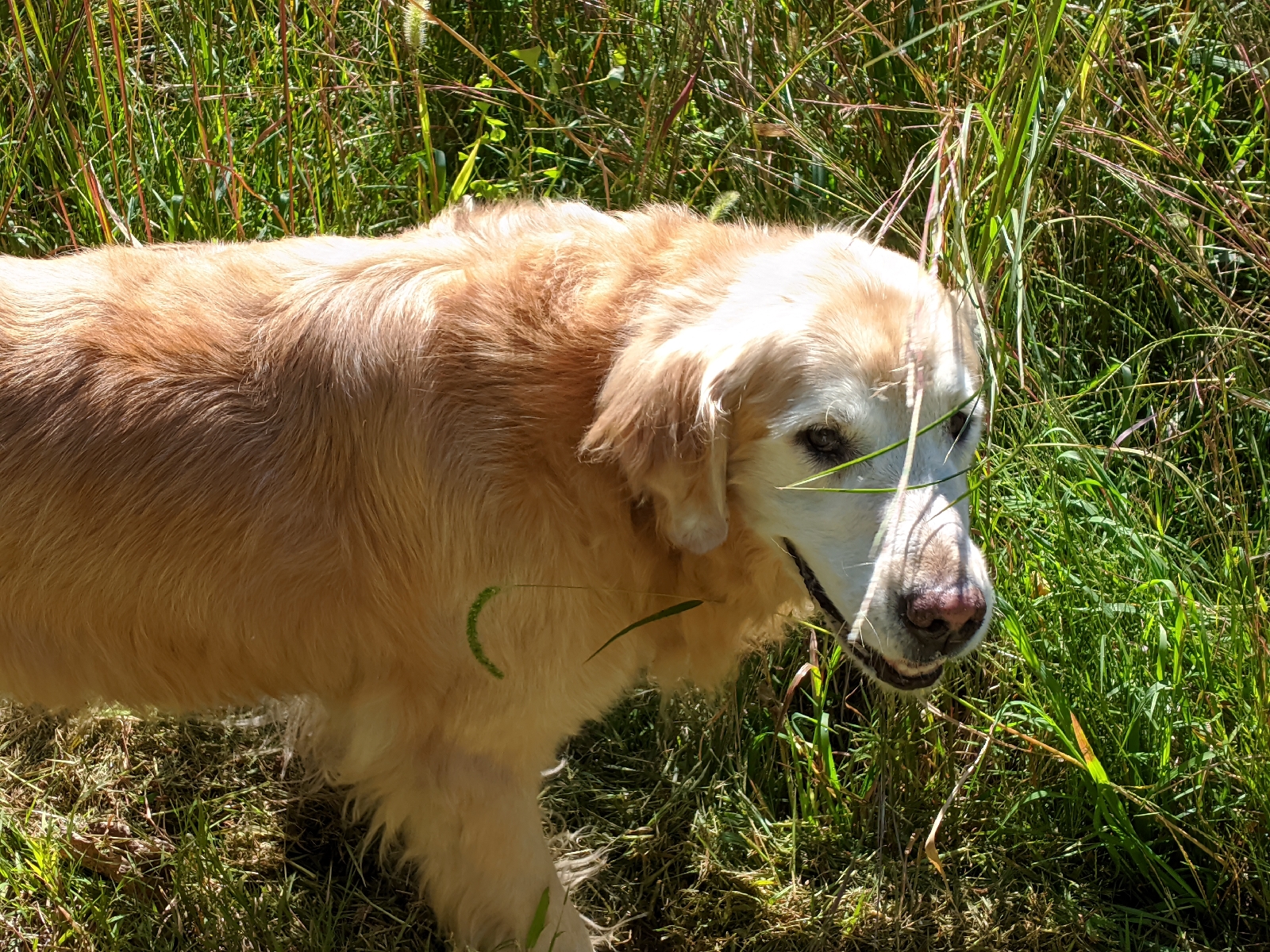 Apparently, the grasses were very tasty.  The Tim and I did not sample them, but Hamlet took his time doing a tasting all along the way. 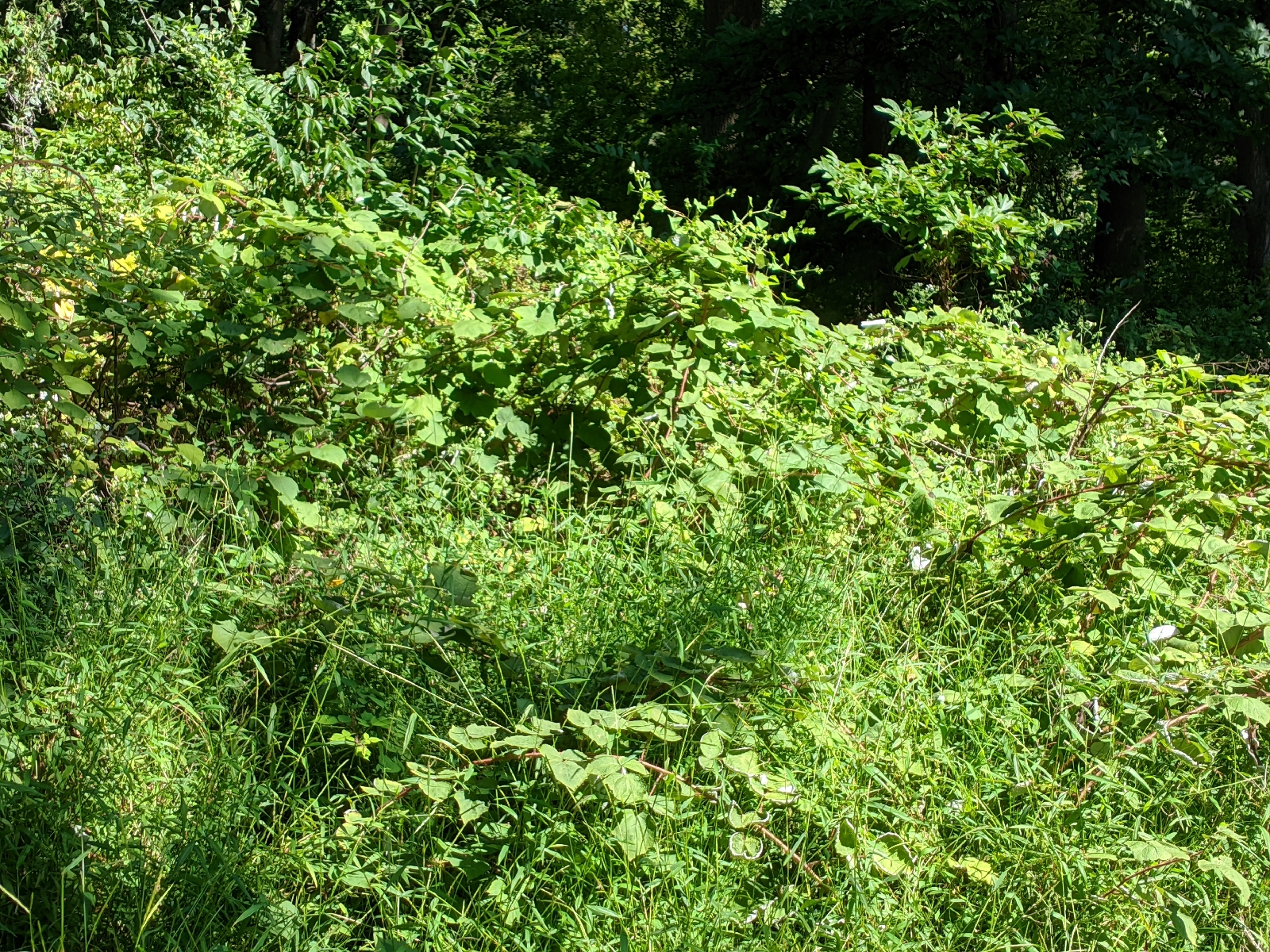 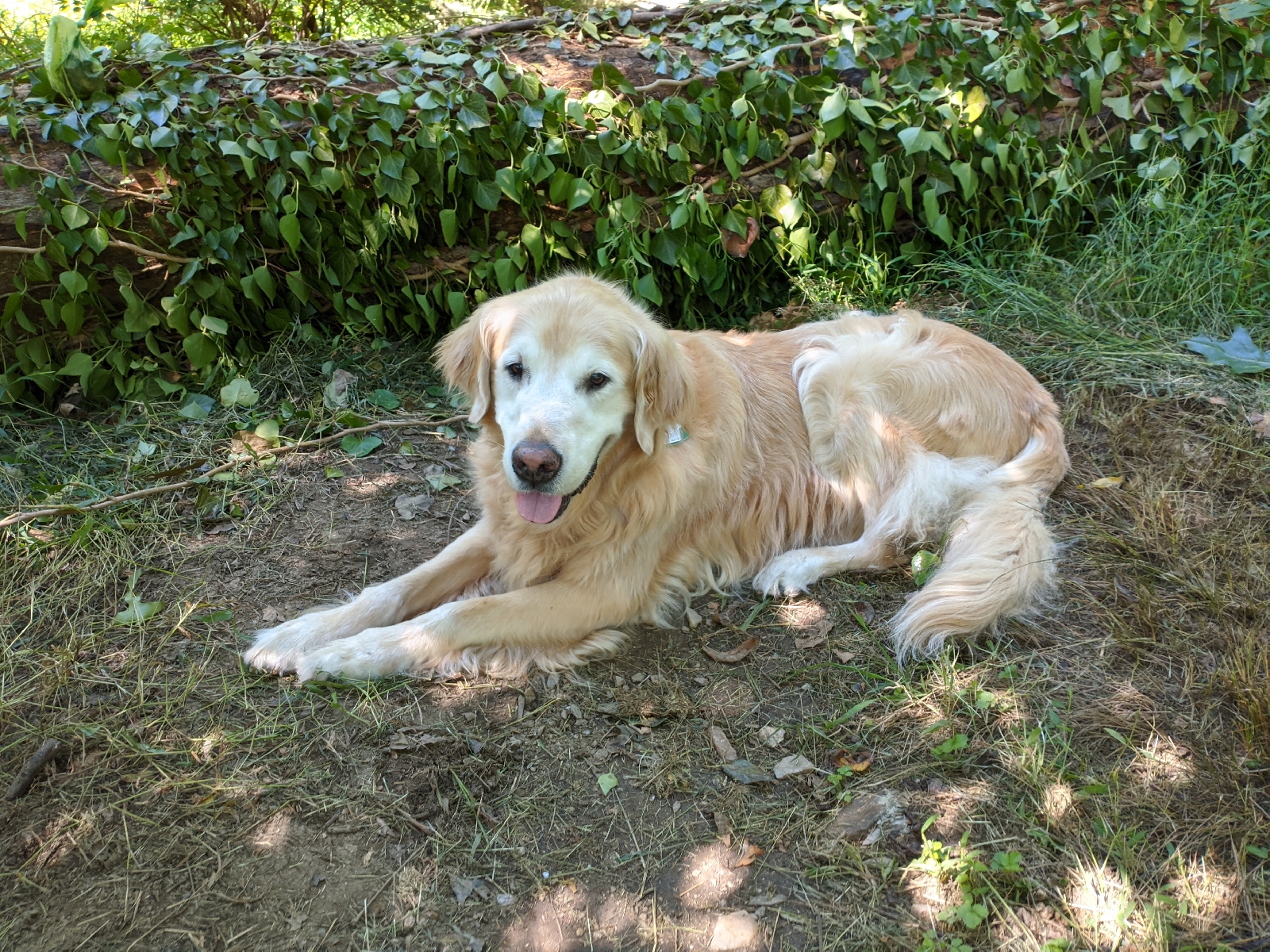 In the photo above, Hamlet is right in front of a log that was blocking the trail and required one to go over it.  I went over first, and then Hamlet lept over it, "just like Lassie!" (OK, that's what we told him - in reality, I pulled, and The Tim pushed and lifted.)  Then The Tim joined us and we continued along.
I always love seeing little wild daisies like these: 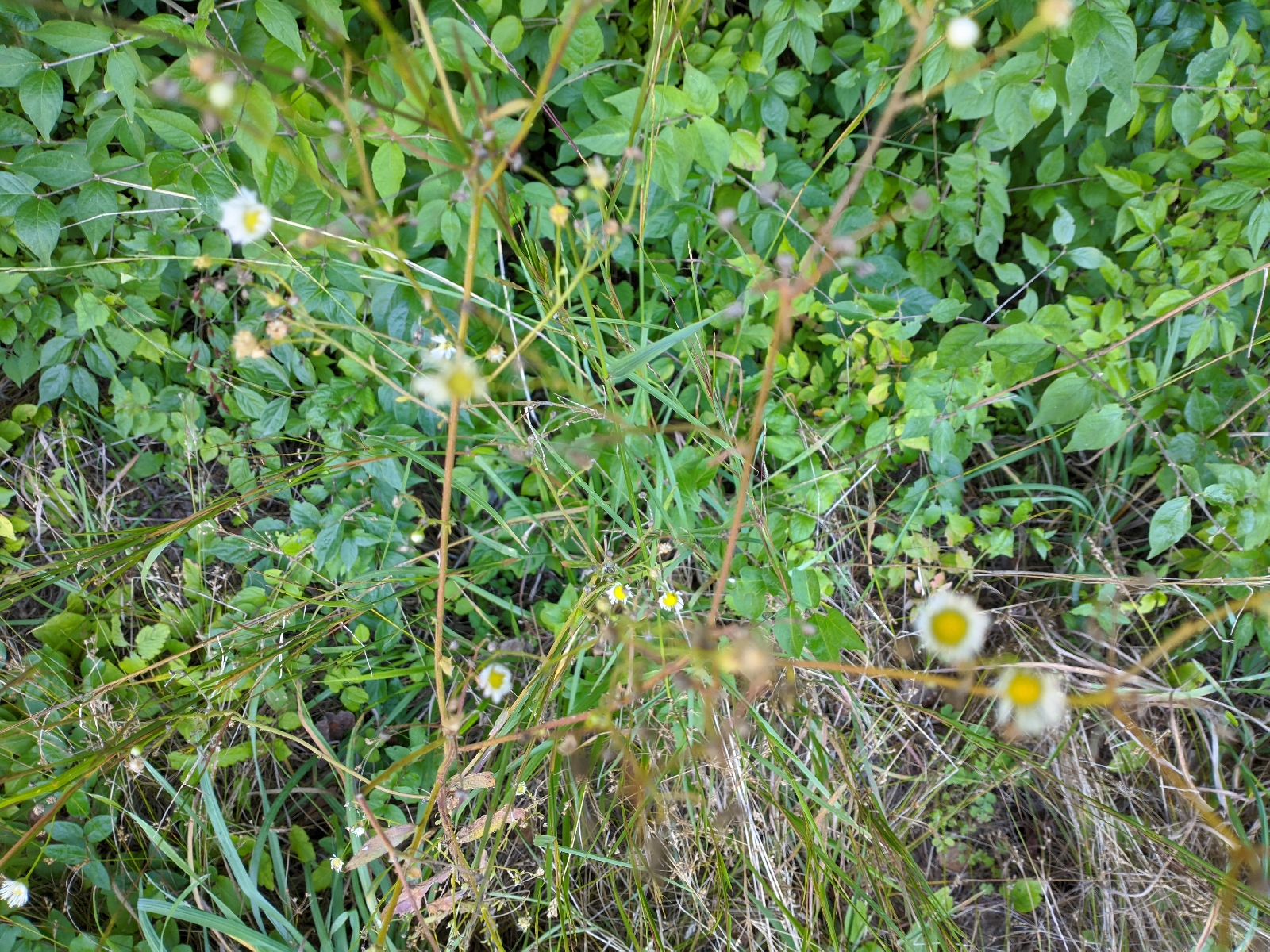 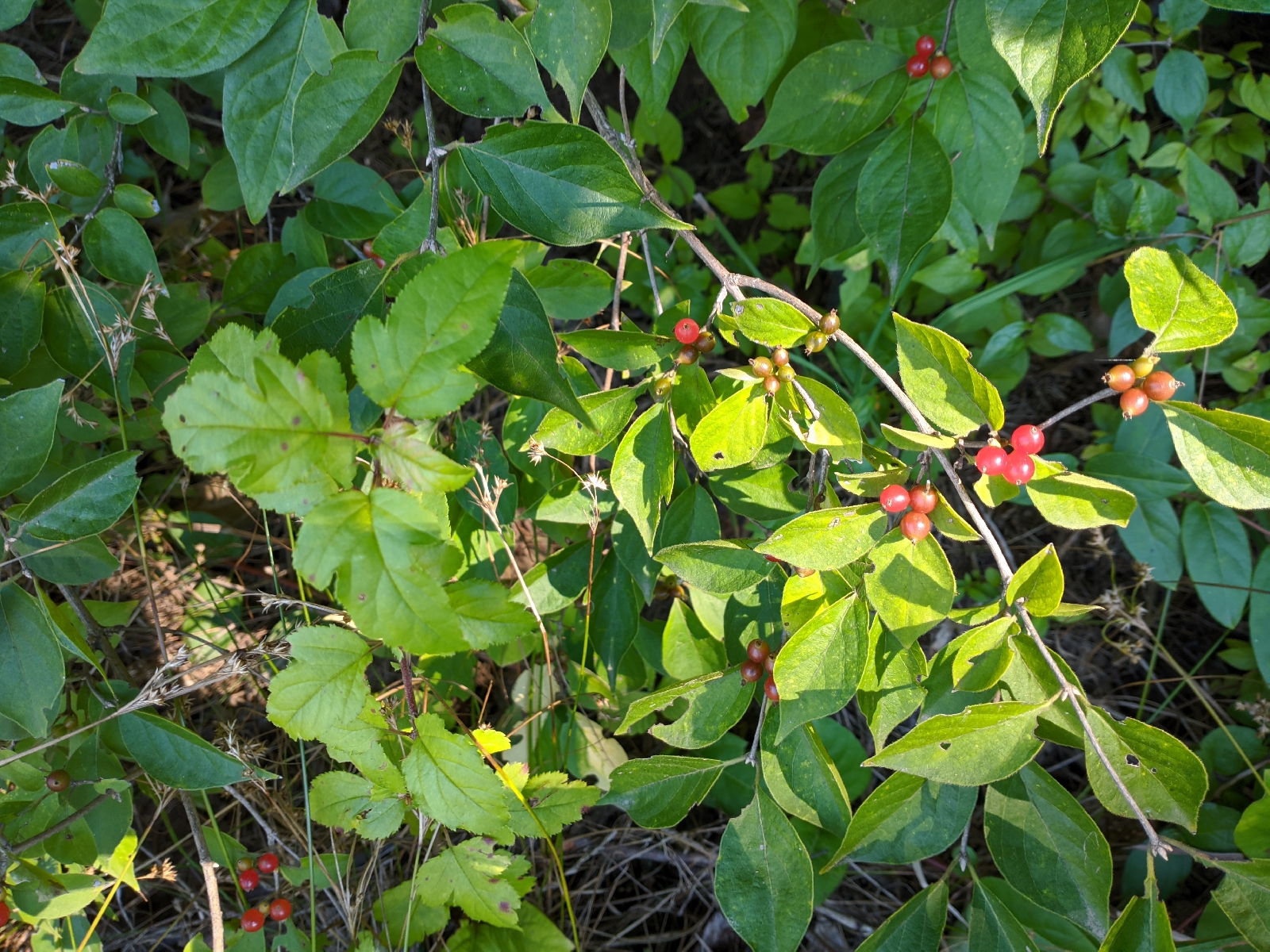 And seeing these little berries pleased me! 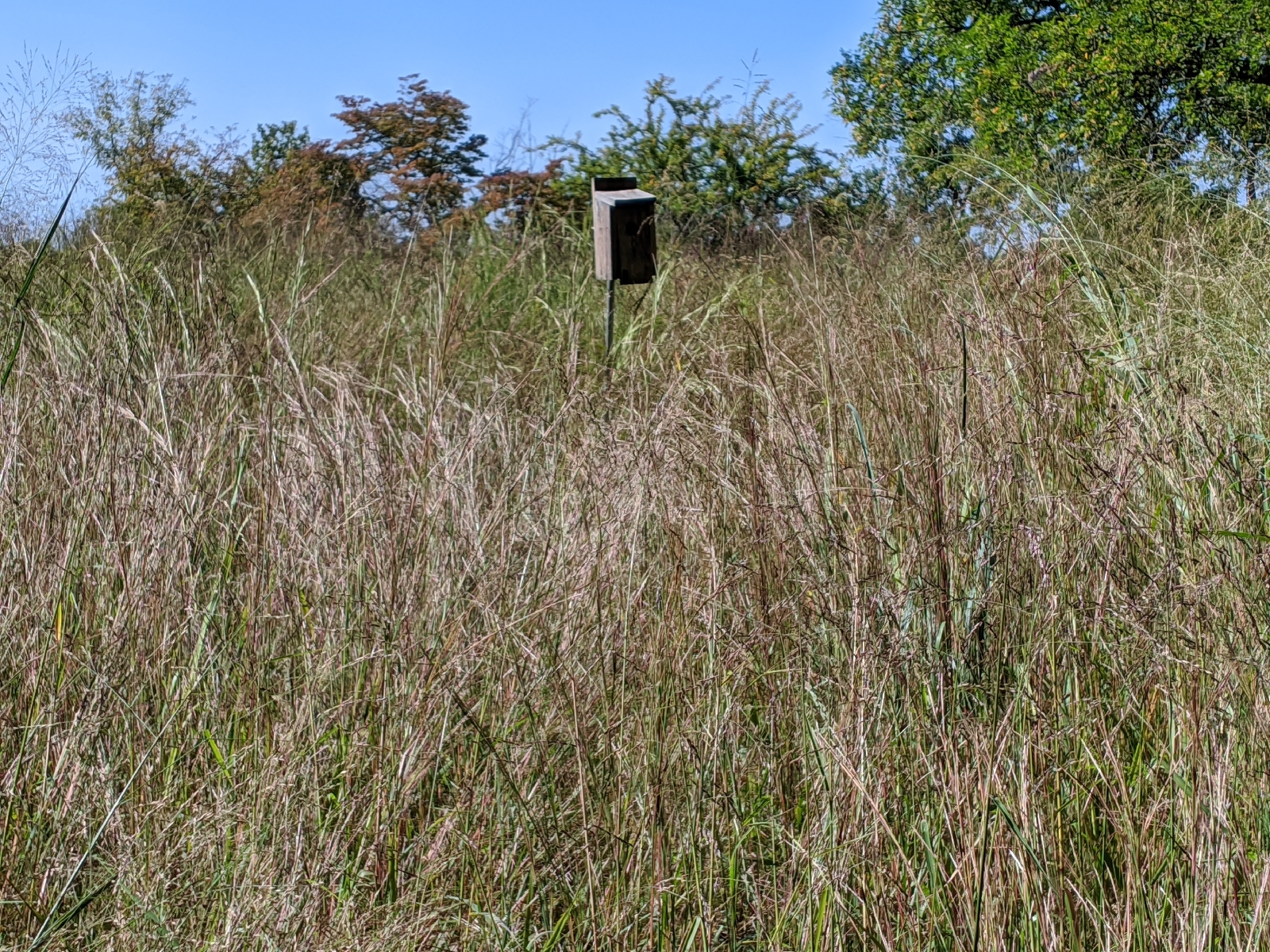 This was in the meadow, where they had these little houses scattered all around. 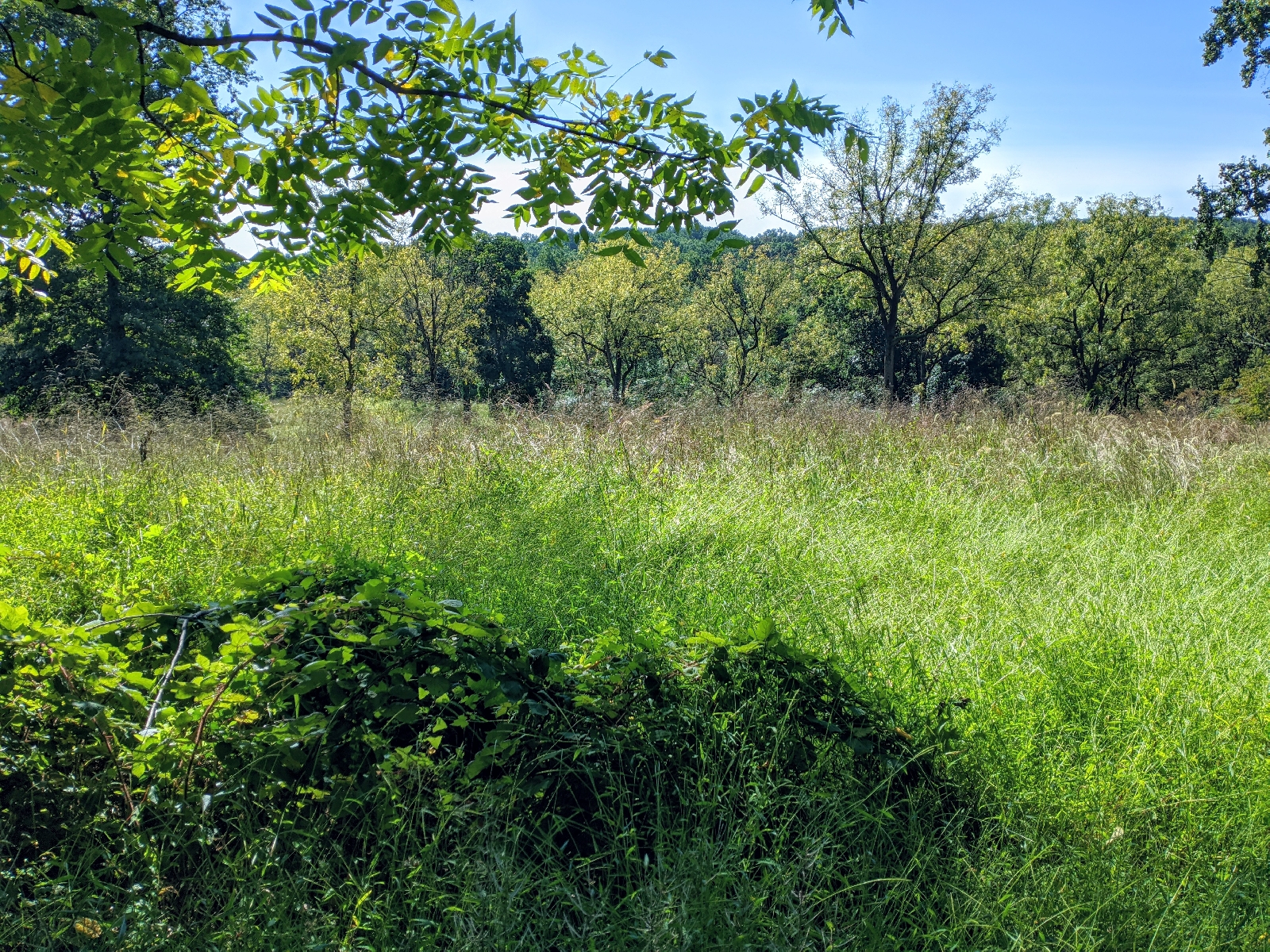 Just look at that sky!  And if you saw these photos and didn't know where you were, who would think that less than a mile away was a major road with stores and houses?
On the way home, we passed a corner where one side of the street had a place called Pete's Pierogies, and the other side of the street had Murphy's Tavern.  We decided that was the best corner in town, since it would cover all of our needs ... 😊
The day finished up with some knitting and reading in the afternoon, and then The Tim made a pizza for dinner.  We watched some shows we'd recorded and just relaxed.  There aren't many days that are that perfect, but Saturday turned out to be one of them.
As we were walking around on such a lovely day, it struck me that it was the same kind of day that it was here on September 11, 2001 - a little bit cool, very sunny, and the kind of day that made you smile and believe that nothing could go wrong.  And it made me think once again how lucky I am to be able to still be here, enjoying those kinds of days, when so many never had that privilege, through no fault of their own.
Posted by Bridget at 10:10 AM
Labels: Hamlet-the-dog, hiking, September-11, weather, weekends

Hamlet looks like he had the best time. You know salad-on-the-go is just the best! Hamlet would agree!

What a wonderful day! Hamlet looks like he was a good time. Grass tasting is something Pup is very fond of too. Not sure why.

What a wonderful day for Hamlet! (and you both of course!)

What a nice place to explore. Glad all 3 of you had a good day!

My fuzzy boy has to taste at least one plant every morning on our walk. Every. Morning.

Those little houses are bluebird nest boxes, but their tenants will have moved on to further adventures by this season.

Lovely to feel surrounded by nature, even when the city is so close!

"Just like Lassie." Oh, you make me laugh! :-) I'm so glad the three of you were able to get out to enjoy such pleasant weather and a GREAT field trip together. XOXO