New Year's Day and Then Some

I just have to say up front that I am glad that this year is an even-numbered one, I enjoy even numbers.  Though 2-0-2-1 did add up to five, which is another good number.  Yes, I am a weirdo with numbers, which is funny because math freaks me out, and has been the cause of low grades all through my school days.  Math and science - ugh.  Anyway, I do like numbers, as long as there are not difficult expecations ...
We had a very quiet New Year's Day, as expected.  It was too warm for this time of year, and incredibly dreary, both of which were dismaying.  I'm just hoping that it was not a symbol somehow for the upcoming year.  We just stayed put, and watched some movies, read, I finished a pair of socks I had been knitting, and there were a couple of walks with Hamlet.  Later in the day, we enjoyed our New Year's Day dinner: 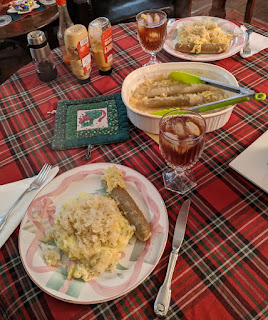 Veggie bratwurst, sauerkraut, mashed potatoes, and blackeye peas (added after the photo was taken).  When I posted this picture on Instagram, Kim commented about the "his and hers Dijon mustard," but I had to disappoint her by telling her that one is Dijon and one his honey mustard, so they're not as quite "his and hers" as she suspected.  Anyway, it was really yummy, and we had leftovers for dinner last night, so we got two meals out of it.  Also, three different times that day, I kept saying "green-eyed peas" (instead of blackeye peas) and I don't think peas can be jealous?  So who knows what that was about.
Yesterday was just a day of getting little things done and/or out of the way, and (at least for me) wishing that work didn't start again today.  If wishes were fishes, etc.
I have a dentist appt this afternoon, for a cleaning.  I'm looking forward to it because it means I get to leave work an hour early.   You know it's bad when a DENTIST appt is something you look forward to happening!
I still need to make a final decision on my word for this year.  I thought I had one chosen, but the more I thought about it, the less I liked it.  I would rather not spend a year begrudging my word, you know?  So it's time to give it some additional thought and find one that is actually meaningful to me.
And that's all of the excitement from me, and no, it's not really exciting.  But a lot of life is just going along from day to day, doing the best you can, so I'm on track so far this year! 😉
I hope your day and the first full week of 2022 is good to you.
Posted by Bridget at 10:15 AM
Labels: health, life, New-Years

Hope the dentist appointment went well. While I hate going to the dentist, I do love how clean my teeth feel afterwards.

Your New Year's meal looks so good. I used to buy veggie sausages all the time but then our store stopped carrying my favorite brand.

My sister is a "weirdo" about numbers, too. She's always adding them together and then declaring whether they're "good" numbers or "bad" numbers. (She's also incredibly talented at turning words around and can read things "backwards.") (Such talent. . . ) Anyway. I hope your dentist appointment goes well -- and makes for a pleasant "work diversion." XO