The Rest of the Twelve Days of Christmas

Hello!  It was so nice to be at home yesterday for the holiday.  It's not so nice being at work today, but I have no choice, so time to move along.
You may remember that I showed you this photo a short while back: 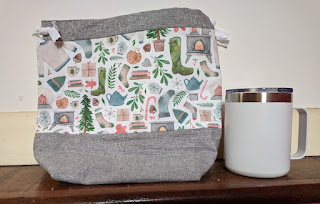 It's the first two items/"Days of Christmas" from a Winter Holiday Box I purchased a few months ago from Joanna at Stitching the High Notes.  Whereas most people opened theirs leading up to Christmas Day, I waited for the Twelve Days of Christmas, and I have to tell you - it was so much fun to still have some little packages to open every day!  Especially once I had to go back to work - there was still something good to look forward to!
Anyway, here are the remainder of the goodies: 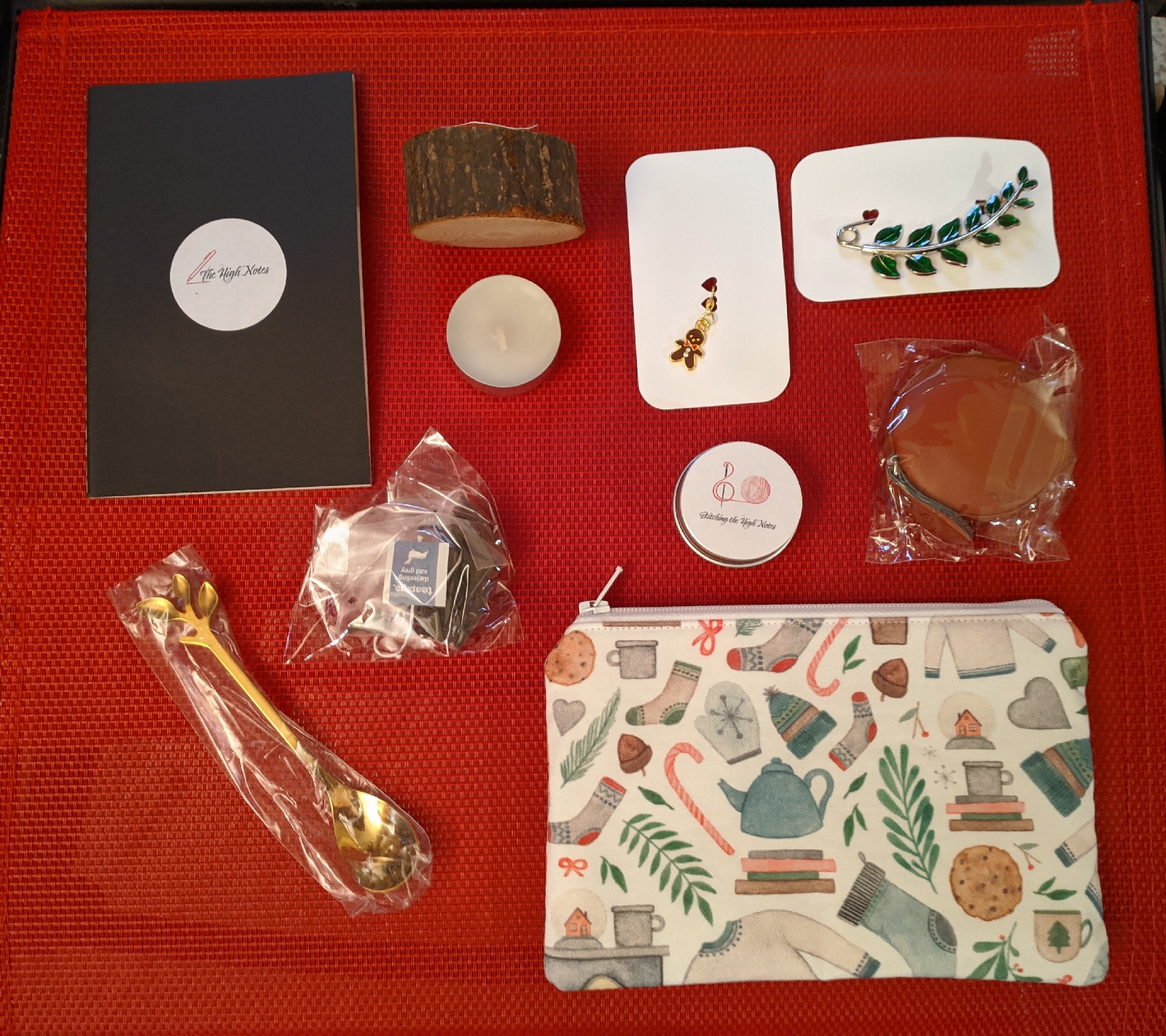 A small journal with Joanna's logo on the front; a small candle and small part of a tree? (More on that below.); a gingerbread man  progress keeper; a leafy shawl pin; a tiny brass spoon with a leafy design on the handle; some Earl Grey tea; a small tin of stitch markers; a tape measure; and, a notions pouch that matched the project bag.  This was such a great group of items to include and to open - they followed a theme, of course, but were not necessarily that predictable (at least not to me).
And that "small part of a tree?"  It's a candle holder for the little candle pictured below it! 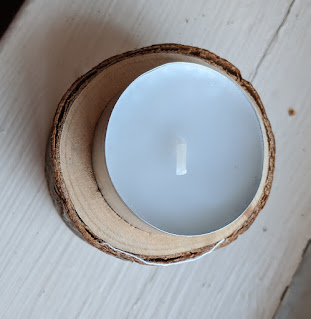 I love this so much!  We have lots of little tea candles too, so once this one is done, I already have refills!
And then on the twelfth day, this lovely skein of yarn: 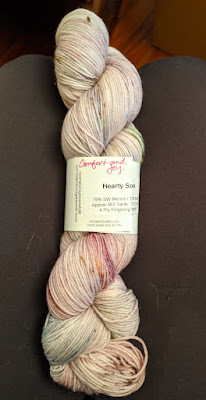 It's from Speckled Finch Studios - a new dyer to me, but local to Joanna - and the colorway is Comfort and Joy.  It's hard to see in the photos, both due to my lack of skill, but also due to the subtlety of the colors. It's on a cream base, and there are light shots of pink, light red, and green, as well as speckles in those shades.  Just really so pretty.  It's sock yarn, but before I start using it, I want to decide if it will become socks or something else.  I think it would make really beautiful socks, but then again, they would be on my feet ...
We'll see.  In any case, if Joanna does this again next year, I can recommend the splurge!  She also did a cross-stitch one, which - if I have any funds at all - I may try next year and see what goodies are found in that box.
Posted by Bridget at 8:29 AM
Labels: Christmastime, gifts, knitting

The yarn is quite pretty. If you made fingerless gloves, you could see it all the time and enjoy it during the colder months.

I think it was a very nice gift for yourself.

Fun stuff! And that yarn is gorgeous!!

What fun. That yarn is lovely!

What a nice assortment. The shawl pin is so pretty.

I love the bag too. The grey fabric on the bottom is perfect.

What lovely treasures! How much fun must it have been to put together those gift boxes.

That's a nice box. I'm always hesitant now with boxes because of the unknown (what do I do with the stuff I don't want?). But that one looks like a good score.

gorgeous presents!! That candle is pretty neat. I exchange with knitting friends and I get THE BEST gifts :)