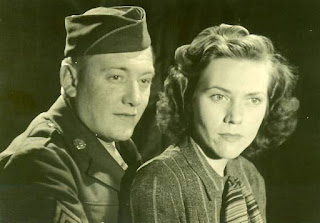 This is a photo of my parents, though I can't say exactly when it was taken.  But I can tell you that today would be their 74th wedding anniversary.

When I was a little kid, I could never fathom why anyone would get married the day after Christmas - I mean, Christmas is big enough as it is, so why try to add something else really big onto it?

But as it turns out, their wedding date was December 26, 1941, because my father had been drafted into the Army after the attack on Pearl Harbor on December 7, 1941.  They wanted to get married and move to wherever he was assigned together, but there was a hitch.  At the time, it was not possible to have a wedding in the Catholic Church during Advent.  The first available day for a wedding then was December 26.

Now of course, people can get married during any liturgical season, so it wouldn't be an issue.  But I can easily imagine the two of them working this out so that it would fit into things perfectly.  My dad was a very organized type, and my mother was an extremely determined type.  Both of them had good senses of humor, so I'm sure they appreciated any of the irony or ridiculousness of whatever happened as well.

When my father died in 1969, they had been married just shy of 28 years.  On their 25th wedding anniversary, they renewed their wedding vows and my dad made sure they threw a huge party (it was even catered - *that* was how fancy it was!), and I'm pretty sure they invited everyone they'd ever met.  It was quite the event, and I like to think that it was one of my mother's happiest memories after he died.

So as you are still enjoying Christmastime, raise a glass in honor of two people whose lives were not perfect, and actually quite difficult, but who were the very center of a weird and happy family that still misses them every day.

hello bridget...thank you for sharing your parent's wonderful story...your description illustrates a warm, generous, fun, lovely couple living their life...from my family to yours a joyous, healthy and blessed new year...take care...sally

Beautiful picture - they look like they stepped off a movie set!

Absolutely. And I'll also raise a glass to the wonderful daughter they raised.

This is such a beautiful story, so sad your Dad died so young. My parents were married 67 years before my Mom passed away, they got married right after the war was over and my Dad returned home.
Hugs to you,
Meredith

I'm actually drinking some bubbly as I read this so I'm toasting your parents in style. The "greatest generation" have the most romantic stories to tell about their wartime romances and your parent's is one of the sweetest.

What a lovely story. Happy anniversary to them!

That really is a beautiful story!

What a lovely, and sad story. I wish they could have had twice as many years together!

Such a lovely photograph! I too wish they could have had many many more years together (and with you)!
My Mom and Dad got married right before he shipped out. He was in World War II - in the Navy - on Saipan. He is now 89 - and my Mom is 88. She has Alzheimer's - and doesn't really remember who he is to her - but they are still together!

I am sure they are among the clouds celebrating the big occasion in a grand way!

Happy anniversary to them!