Well, we had a great day on Christmas.  Quiet and relaxing.  It was too warm and humid, but we tried to ignore that and enjoy the day anyway.

Our house ended up looking nice, once we got everything ready, and then actually cleaned up! 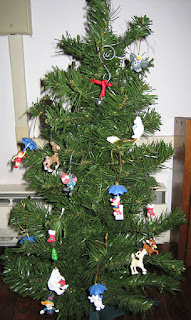 This year, the Misfit Toys had a little tree of their own. 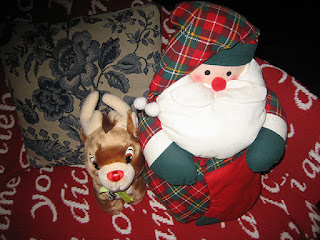 Santa and Rudolph were at the ready. 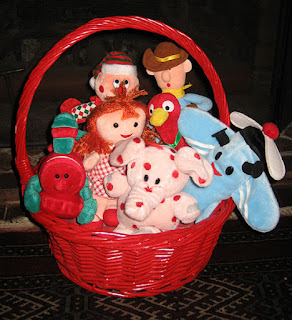 As were the Misfit Toys. 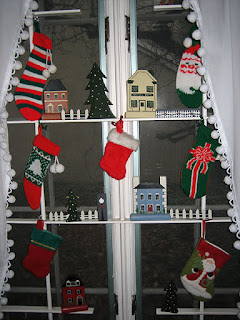 One of the windows looking out onto the garden was especially dressed up! 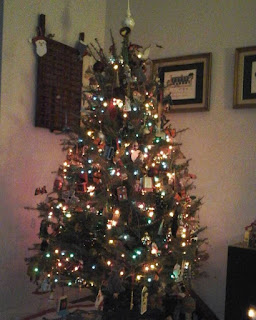 The Christmas tree was just waiting for Santa. 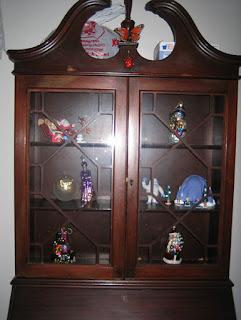 The secretary was even fixed up!

And there were tons of other decorations that you'll see one way or another. :-)  If you are on Instagram, I have some pictures there as well.

Anyway, Santa did in fact show up and it was quite exciting. 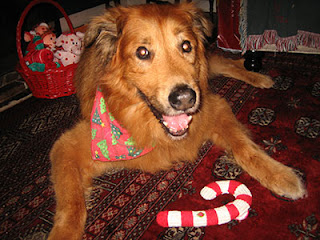 One of Dug's favorite gifts was a corduroy candy cane. 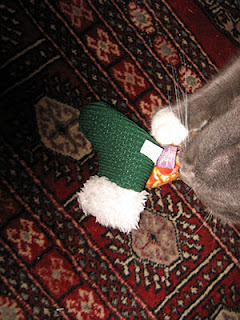 In typical kitty fashion, Jetsam played with Pip's gifts - a catnip stocking and a catnip wedge of pizza! 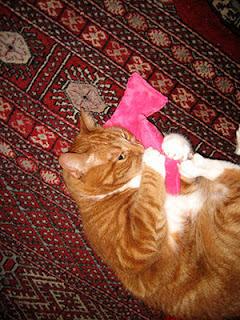 Milo the Koodle found the Little Pink Socks (like Mooch has in the "Mutts" comic strip) to be completely irresistible. 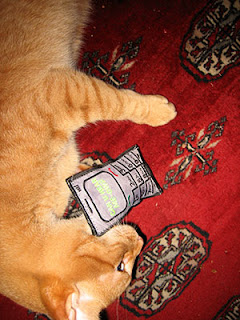 Pip repaid Jetsam by playing with one of his toys, a catnip cell phone. 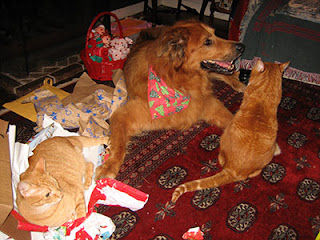 There were several pauses in the action, which meant that we actually spent a good part of the day opening presents and finding out what goodies were in our stockings.

Later in the day, we had a great Christmas dinner, and watched the end of "National Lampoon's Christmas Vacation," which we had started watching a few days before.

Many lovely, sweet, and funny gifts were opened, many carols were listened to and sung, a lot of food was eaten, and we had wine in the afternoon and eggnog in the evening.

The only thing missing was cold weather and a fire in the fireplace.  But we were all together, and it was a wonderful day.  You can't really ask for more than that.
Posted by Bridget at 7:02 PM
Labels: Christmas-Day, Dug, family, gifts, Jetsam, koodle, Milo, pets, Pip

Looks like Pip, Jetsam, Milo and Dug had a PURR-fect Christmas! :-)

It sounds like you had a really lovely Christmas.

Oh....look at all those Rudolph toys!!! I have a small Abdominal that hangs on my skate bag but you've got the whole gang!

Looks like all the critters in your house had a wonderful holiday! I love that the misfit toys had their own tree.

It looks like you had a marvelous celebration! (I adore your misfit toys . . . ) Happy New Year! Here's to a wonderful 2016 -- full of all the best kinds of adventure. XO