First of all, thanks to everyone for the well wishes earlier this week.  My test was completed, and if nothing wonky turns up, I don't have to have another one for two years!  That would be a lovely gift.

Do you like Christmas movies?  It will probably not surprise you to know that I LOVE them!  I have several favorites, different times, and different genres, but one that speaks to me very closely is "National Lampoon's Christmas Vacation."

It is quite easily one of the most stupid movies ever made, which is part of the reason I enjoy it so much, but really it is mostly because it is so evocative of my family.  Truly.

I love my family, and we enjoy each other's company, but it's a pretty loony bunch.  In a good way, but still ... the interesting thing is that we all managed to marry people who have no trouble fitting right in, albeit in their own special ways.

I think every single niece and nephew of mine - and now some of the great-nieces and great-nephews - can recite all/part of the movie.  We go around saying things to each other and responding in lines from the movie.  We have cousins like Cousin Eddie, Cousin Catherine, and their family, who we would sometimes see only at Christmastime growing up.  They may have lived in the same town as we did on occasion, but everyone always ended up at our house.

One of everyone's favorite things though, is more recent.  Years ago, The Tim decided that he needed to recreate Cousin Eddie's Christmas Eve look for Christmas Eve at my sister's house. 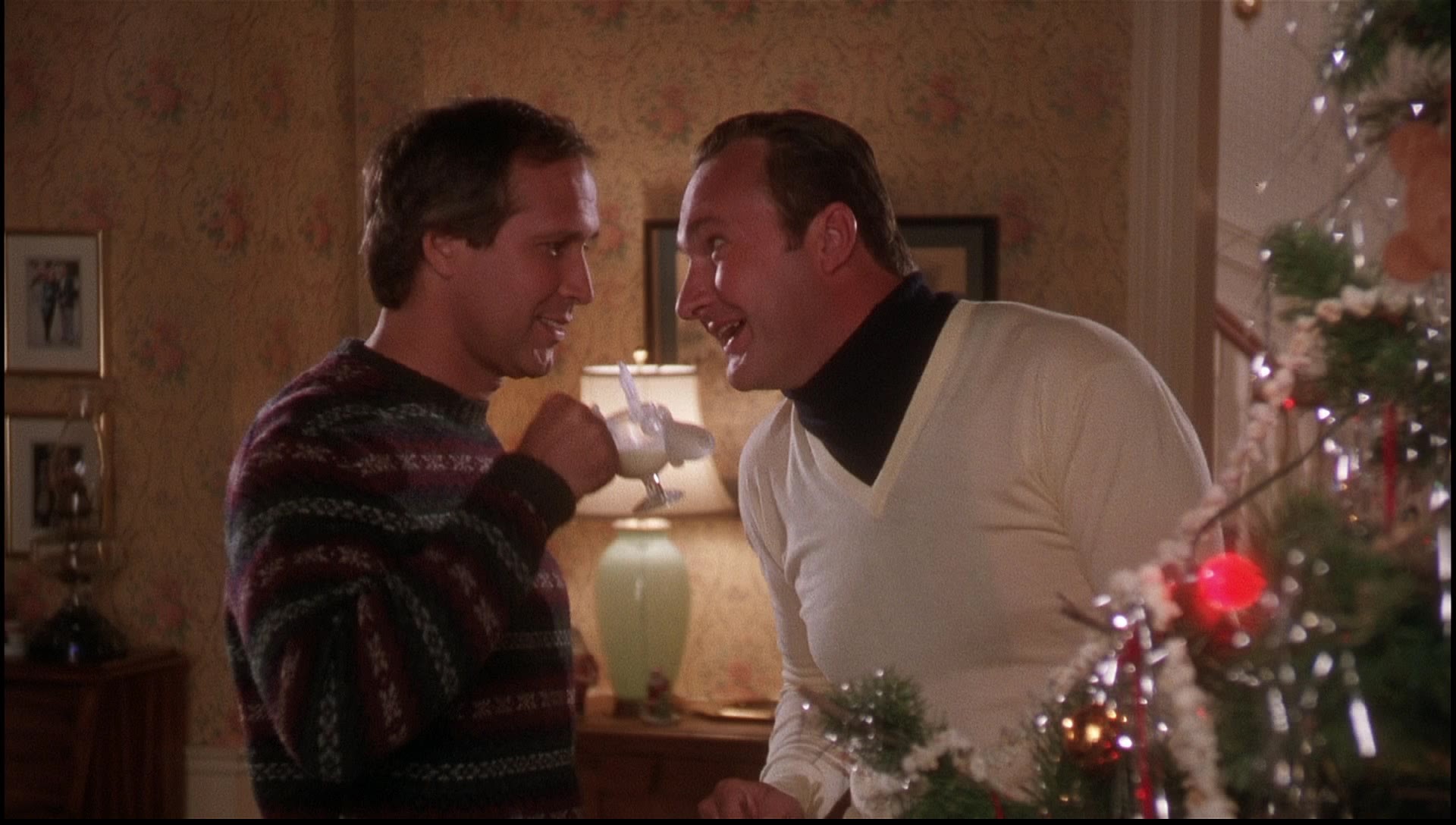 Well, he found a white sweater and belt for $3.00 total at a local vintage shop, but had real trouble finding a black dickey.  The best part for me was watching him go into stores and asking clerks if they sold dickeys.  This was before online shopping was prevalent, so you pretty much had to find most things by going into different stores.  This was also long after dickeys were a common piece of attire (if they ever really were).

Finally, he found the perfect one at Woolworth's.  I think it cost $8.00, but it was exactly what he was looking for, and he was thrilled.

What we did not know is that my nieces had invited a bunch of their friends for Christmas Eve, as had my sister and brother-in-law.  Since The Tim had been building everyone up for a "Big Surprise on Christmas Eve" since we'd arrived, he had no choice but to go through with it.

Soooo many people looked puzzled and/or scared.   Several knew exactly what he was going for, and it ended up being one of the best Christmas Eves ever.  My nieces still remember every year when "Uncle Tim dressed like Cousin Eddie," and last year, my great-nephew (then 8 years old),  Zach said he thought it was unfair that we can't make it home for Christmas Eve anymore, because now he would "never see Uncle Tim dressed up like a guy."

*That's* funny in and of itself, if you ask me!

So this year on Christmas Eve, I hope you have a fun time with your family, and maybe even watch a movie or two.  If nothing else, remember the year that "Uncle Tim dressed up like a guy," and have a chuckle.

Does your family do anything ridiculous at holiday time?  I'd love to hear about it!

you mean "cousin Eddie"? I believe he was Cousin Eddie, not Uncle Eddie. Its one of my all time fav Christmas movies too, next to A Christmas Story.

Oh my gosh, you're right! It probably got confused because we had an Uncle Eddie!

I love that movie. In fact, one of my crazy holiday stories is because of that movie. We always took the kids to see a holiday film every Christmas and that was the one for that year. The boys were getting popcorn while The Mister and I settled into our seats as the crowded theater grew dark only to see some kid running down the aisle trip and throw a whole giant bucket of popcorn all over everyone in the row in front of us. Of course it was our kid. We pretended we didn't know him. We tell that story every Christmas.

That is a wonderful story, your husband has a great sense of humor.
Hugs,
Meredith